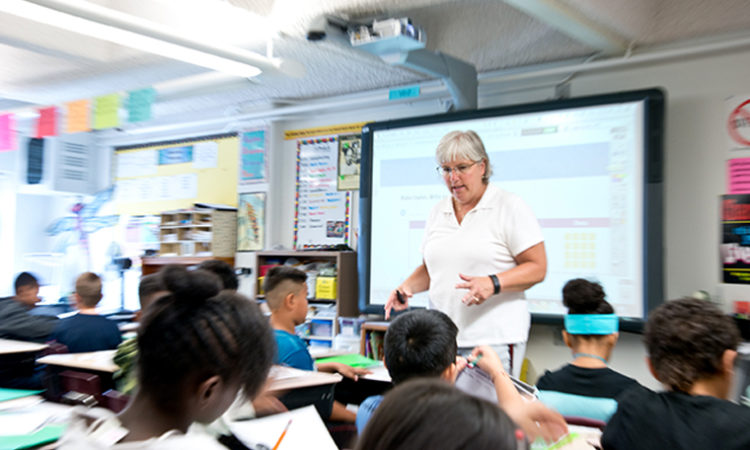 Workers in medium-pay industries, like education and health services, and in lower-paying industries have seen their paychecks rise only modestly relative to inflation. ( Photo by Bill Kelley/MinnPost)

With Minnesota Unemployment So Low, Why Aren’t Wages Going Up More?

Under normal economic assumptions, when the supply of something—labor—is low, its price—wages—should go up.
By Greta Kaul
February 07, 2019

Minnesotans should be getting a bigger raise.

At least that’s what lots of economists expect when unemployment is as low as it is — under 3 percent.

With few people out of work and more jobs open than workers to fill them, employers are calling labor shortage. They’re posting help-wanted signs and warning if they can’t find enough workers soon, Minnesota’s economy will slow down.

But not everyone agrees that the labor shortage is quite so bad.

“I don’t see a widespread labor shortage, I see businesses not wanting to raise wages across all sectors,” Neel Kashkari, the president and CEO of the Federal Reserve Bank of Minneapolis, told the Minneapolis/St. Paul Business Journal recently. “I’ll believe there is a labor shortage when I see wages increase and companies still have trouble finding workers. Until then it’s just talk.”

The labor market should be governed by the rules of supply and demand. In simple terms, when the supply of something — like labor — becomes scarce, we should see its price — wages — increase. 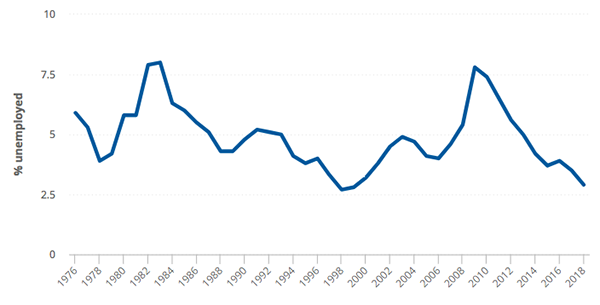 When the supply of labor goes down, economists expect to see employers start to do things to entice people to work for them — like raising wages. If one employer in a sector raises wages, other employers in that sector should raise wages in order to compete. Soon, wages on the aggregate would be expected to rise.

The last time unemployment was under 4 percent in the second half of the ’90s, workers saw a fat paycheck increase. Between 1995 and 2000, workers saw an average $6,367 bump in pay, according to Federal Reserve data analyzed by DEED (all wage data in this story are in 2018 dollars, adjusted using the Consumer Price Index). 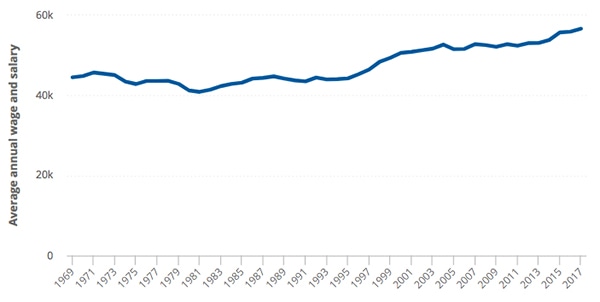 Stagnant wages aren’t spread out evenly across economic sectors: Jobs where workers were already earning bigger paychecks, like financial activities, saw bigger gains, while workers in medium-pay industries, like education and health services, and in lower-paying industries, like leisure and hospitality, have seen their paychecks rise only modestly relative to inflation. 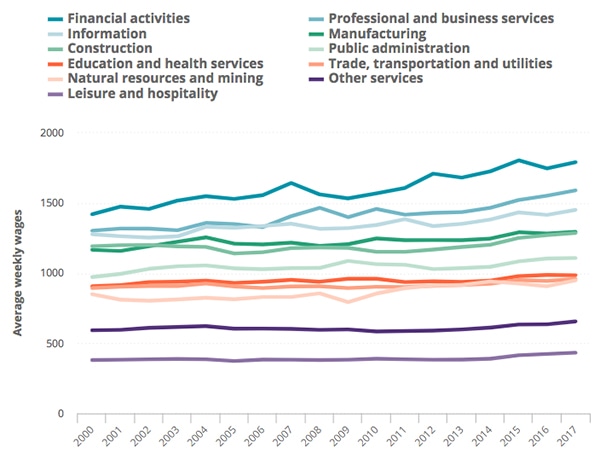 If unemployment is so low, why aren’t employers offering higher wages to attract workers?

One possibility, says Mark Wright, research director at the Federal Reserve Bank of Minneapolis, is that the labor market isn’t that tight after all — maybe our measures of labor market tightness aren’t very good.

One sign that this could be the case is we’re seeing people who previously reported not working because they were disabled going back to work.

“That’s a very welcome trend (and it’s) people we maybe thought were never going to work again,” he said. That may mean there’s more labor supply out there than the usual measures, like unemployment rate, indicate.

A second possibility is that firms are using things like benefits and workplace culture to attract workers — not higher wages.

“It’s purely anecdotal, but we have heard stories about firms offering more flexible working conditions — more paid time off and so on — as a way of attracting employees. It’s possible (the labor market is) tight, it’s just not showing up in wages, it’s showing up in other benefits,” Wright said.

A third possible explanation begins with the observation that profits have been large while wage payments have been low relative to the size of the economy. A lot of people point to that as evidence of monopsony in the market. Monopsony is a structure in which one buyer controls the market, holding prices down.

“In certain industries, we have seen a lot of mergers,” Wright said. For example, in lots of cities, there are fewer separately run hospitals, as more and more are run by the same networks.

When workers don’t have a lot of options for jumping ship to another company, it’s easier for employers to keep wages down.

“So the idea being that it’s possible that that’s holding wages down, even though things (in the labor market) might be getting tight,” Wright said.

Another example where this could be the case is with retail giants like Amazon, which has reached its preeminence in many markets by offering the lowest prices on goods, forcing other sellers to compete with it or lose business.

For firms that supply to Amazon, “anecdotally, one of the reasons they’re not raising wages is they can’t pass it on to Amazon,” Wright said.

It’s also possible that average wages are declining, in part, because baby boomers are retiring, taking their big paychecks with them, said Dave Senf, a labor market analyst at DEED.

The explanations given above aren’t mutually exclusive, either: Some or all could be in play keeping wages down.

“The housing market is really tight — there’s fewer listings than there used to be. What do we see happening? People are making offers above the asking price and housing prices are going up,” said Elizabeth Davis, a professor at the University of Minnesota who specializes in labor economics.

Especially if their customers aren’t getting a raise.