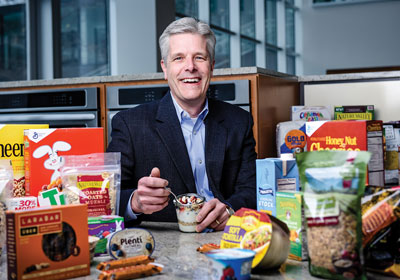 With Kraft Heinz-Unilever Merger Quashed, Could General Mills Be Acquired?

The food industry has been in a consolidation phase over the past several years and some experts believe General Mills may be up for grabs.
February 21, 2017

After its failed $143 billion bid for Unilever over the weekend, observers believe Kraft Heinz, owner of the Miracle Whip and Oscar Mayer brands, is likely to set its sights on another packaged food company. And of those expected to be on the Chicago-based company’s shortlist, experts said, is General Mills.

The Golden Valley-based owner of Yoplait and numerous cereal brands has been under pressure in recent years to increase its revenue, which shrunk from $16.66 billion in 2012 to $16.56 billion last year. To improve its situation, General Mills, which is one of the nation’s largest producers of processed, carb-laden foods, spent the last several years removing artificial colors and ingredients from its portfolio as customer preferences shifted toward so-called natural and healthy foods.

The company is not alone in its struggle to grow revenue. Rival food makers have increasingly turned to consolidation as a growth option in recent years.

In 2015, Kraft merged with Heinz in a deal valued at $49 billion. Warren Buffet’s multinational holding company Berkshire Hathaway and 3G Capital Partners, a private equity firm from Brazil, were instrumental in the consolidation as together they own 51 percent of Kraft Heinz.

Bloomberg reported that Kraft Heinz ultimately pulled out if its bid for Unilever after Berkshire and 3G felt the deal’s negative response would make “a friendly transaction impossible.”

Berkshire, in particular, has expressed in its 2015 annual report that it would “join only with partners making friendly acquisitions.”

The likelihood of a General Mills acquisition—and whether it’s Kraft Heinz or another food company that makes an offer—remains unclear. For now, General Mills has remained mum on the topic, as spokeswoman Bridget Christenson said the company would not comment on rumors or speculation.