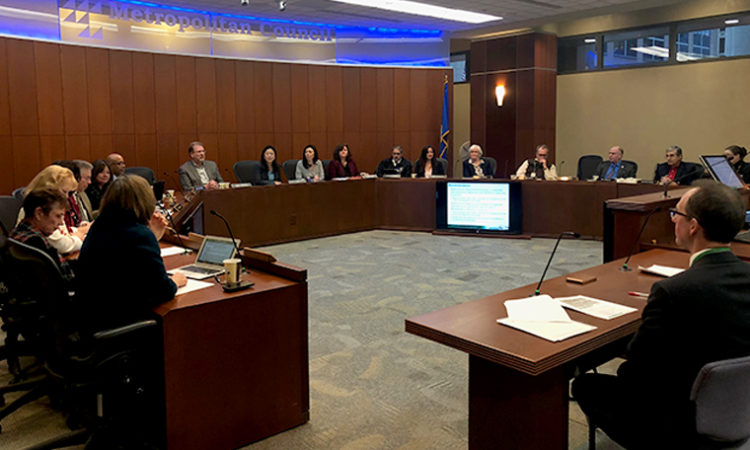 The Metropolitan Council moved on Thursday to allow construction on the massive Southwest light rail project. ( Photo by Jessica Lee/MinnPost)

With Federal Approval, What’s Next for the Southwest LRT?

Here’s what the latest developments mean for the $2 billion project — and what has to happen in the next weeks, months and years for the line between Minneapolis and Eden Prairie to actually start serving passengers.
By Jessica Lee
November 16, 2018

In a historic moment for transit in the Twin Cities, the Metropolitan Council moved to allow construction on the massive Southwest light rail project Thursday, following a notice from federal transportation authorities that the feds are likely to pay their portion of the 14.5-mile line — a development that was celebrated by light-rail advocates across the region.

Here’s what the latest moves mean for the roughly $2 billion project; where things go from here; and what has to happen in the next weeks, months and years for the line between Minneapolis and Eden Prairie to actually start carrying passengers.

Why the letter from the feds was so important

For construction to begin, regional leaders needed documented approval from the Federal Transit Administration (FTA) saying it was prepared to pay its share (a little less than half) of the project’s price tag, which currently stands at $2.003 billion. That letter arrived Wednesday afternoon. Known as a “Letter of No Prejudice,” it kicked off a series of procedural steps by local authorities to finalize their plans for what is the biggest infrastructure project in state history.

“This is a day we’ve been waiting for for a long, long time. We’ve been fighting for this,” said Hennepin County Commissioner Peter McLaughlin, who has long championed the project.

The letter gives the green light to local authorities — specifically the Hennepin County Board of Commissioners — to start writing checks for construction with assurance the federal government will reimburse them. That means regional leaders will be spending local tax dollars while they complete an application for what’s called a Full Funding Grant Agreement through the FTA. If all goes according to plan, local authorities will get that grant next spring.

“We will continue to work with the FTA over the coming months to submit our application for the Full Funding Grant Agreement,” said Metropolitan Council Chair Alene Tchourumoff.

Why local officials are confident Southwest LRT is going to happen

Local leaders are choosing their words carefully to describe the letter, since it’s not a final approval from the FTA that the feds are spending their $929 million share of the project. But when asked by reporters if she considers the Full Funding Grant Agreement all but locked down, Tchourumoff said: “We feel pretty hopeful about it, and we remain in constant contact with our partners at the FTA to work through that process.”

There is reason for some caution, though. The FTA under President Donald Trump has delayed similar transit lines in the pipeline by giving out federal money for the projects slowly. From light rail in the Seattle metro to new bus routes in Milwaukee, projects nationwide have faced standstills, leading to soaring labor and construction costs.

Even so, there’s a reason supporters of Southwest LRT are celebrating: All transportation projects that have reached this step have eventually secured a federal grant, Tchourumoff said. Regional planners used the same process for the original Green Line between Minneapolis and St. Paul, which received full federal funding in 2011.

Leaders of the Southwest Light Rail have already spent nearly $293 million on the project for planning and environmental reviews, most of which is local money.

Why transit advocates are breathing a sigh of relief

Regional leaders started talking about the Southwest Light Rail 20 years ago, and the project has had a tumultuous journey pretty much ever since. Between political fighting at the state Capitol to pushback from freight train companies, the fate of the massive project seemed uncertain more often than not.

Members of the Met Council and Hennepin County Board of Commissioners recalled some of those memories in meetings Thursday to highlight the momentous nature of this week’s news, and commended each other and thanked people who helped them along the way, ranging from suburban mayors to Gov. Mark Dayton.

“He stuck with us,” McLaughlin said of the governor. “When people look back at this history of our region, they’re going to look at these major investments that we helped drag over the finish line.”

Why you probably won’t notice anything happening for a while

In the wake of receiving the letter of no prejudice, the Met Council finalized its agreement with the firm of Lunda Construction/C.S. McCrossan to be the project’s contractor. The contract totals more than $799 million and caps a 15-month bidding process.

The contractor, which is based in the Midwest, also built the Green Line and the Blue Line, which runs from the Mall of America to the airport to downtown Minneapolis.

The agreement allows the firm to get ready to start buying equipment, planning staffing and surveying the site. The Council is planning a symbolic groundbreaking ceremony later this month. Then, in December, the council will issue what’s called a “Limited Notice to Proceed” that gives Lunda Construction/C.S. McCrossan official permission to start construction on parts of the route. 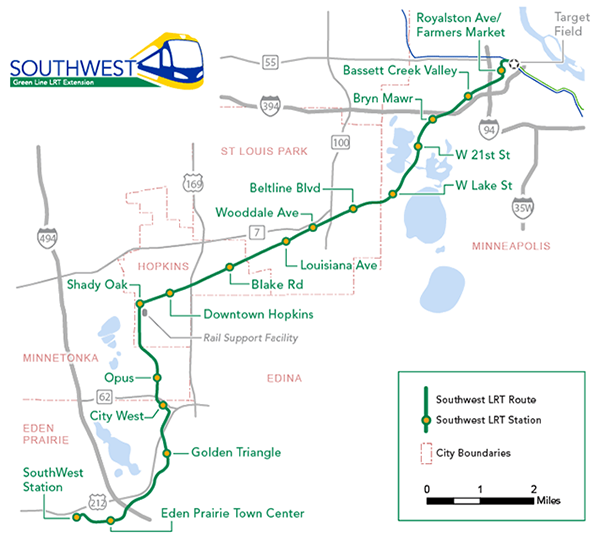 Courtesy of the Metropolitan Council

But it’s unlikely that most people will actually notice “anything remarkable” in terms of construction until next year, according to Southwest LRT project director Jim Alexander. “2019 will be very, very busy. A lot of things will be happening all over the line,” which will include stops in Minneapolis, St. Louis Park, Hopkins, Minnetonka and Eden Prairie. “It’s going to impact a lot of people.”

Lunda Construction/C.S. McCrossan’s bid for the Southwest Light Rail expired Thursday, which is why McLaughlin thinks the FTA letter arrived when it did. The agency did not want the bid “to go sour,” he said. “It wasn’t by accident.”

The Met Council touts Southwest LRT as critical for reaching the metro’s goals around affordable housing, development and job growth. Planners are preparing for an average of 34,000 people to use the new train on a typical weekday, which compares to a daily ridership of about 40,000 people on the Green Line.

Project leaders expect that heavy construction to last three years, between 2019 and 2022. They will then spend about a year testing the train cars before allowing passengers on for full service in 2023.