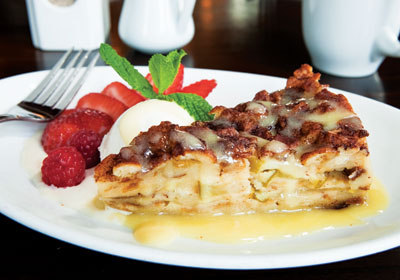 For many years, the best old-style bread pudding in the Twin Cities was in the Warehouse District, at the very old-style Monte Carlo, drizzled with a buttery caramel sauce. Now a new generation of bread pudding has come of age. Case in point: Hazel’s Northeast in Minneapolis, which serves up a gravy boat full of bread pudding, topped with a big dollop of whipped cream.

Additional ingredients vary with the season: They might be berries, they might be apples. Sometimes Hazel’s makes its pudding from the previous day’s cinnamon rolls. Citizen CafÃ© in South Minneapolis forgoes the crunchy contrast and bakes the pudding in a uniform slab, custardy and dense.

Downtown, Brit’s Pub also takes the custardy slab approach, serving it up with warm raisins and a caramel hard sauce. But it is the Cooper, the St. Louis Park outpost of the Kieran’s Pub empire, that makes bread pudding elegant. A warm, delicate wedge with thin, defined strata of bread and apple and the faintest hint of cinnamon— this is just what you’d want after a large and festive meal.

Topped with a coating of rich pastry cream, a drizzle of sweet caramel sauce, and a tiny scoop of melting ice cream—it’s the ultimate study in bread pudding’s contrasts and possibilities.