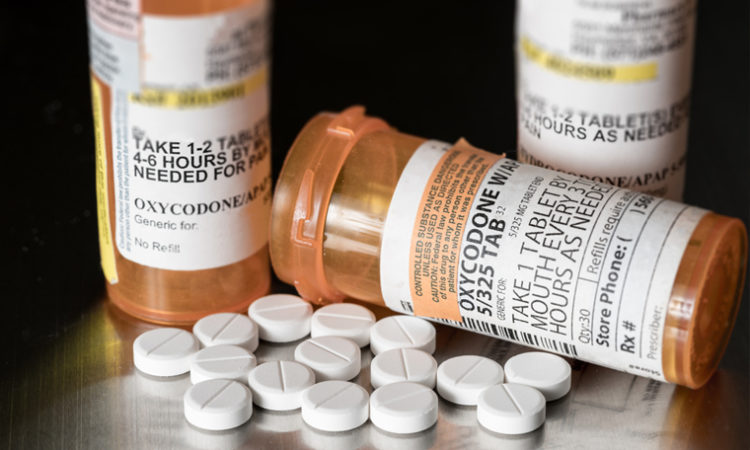 The pharmaceutical industry will continue to oppose any taxes or fees on prescription drugs, calling it a bad precedent to raise taxes on drugs that people need.

Will Minnesota Lawmakers Pass an Opioid Bill in 2019? Some Say It’s Practically a ‘Done Deal’

At the end of the 2018 session of the Minnesota Legislature, supporters of measures to create programs to fight opioid abuse and addiction were disappointed — and determined.

Bills to raise $20 million — first via a penny-a-pill tax and then through licensing fees on opioid manufacturers and distributors — had failed to get through the Legislature. And though a few provisions to fight the epidemic were included in a nearly 1,000-page omnibus bill, that legislation was eventually vetoed by Gov. Mark Dayton.

While blaming House GOP leadership, especially then-House Speaker Kurt Daudt, for the failure of the funding bills, backers of the measures said their next steps would depend on the results of the election. “If Speaker Daudt is still there, I’ll probably go to court,” Sen. Chris Eaton, DFL-Brooklyn Center, said at the time. “If the Democrats are able to take the House back, we’ll probably try again with the legislation.”

Well, Daudt won’t be speaker when the Minnesota House of Representatives convenes in January. That job will all-but-certainly be filled by Rep. Melissa Hortman, DFL-Brooklyn Park, thanks to a Nov. 6 election that saw the DFL take control of the chamber by picking up 18 seats.

All of which means the political math around the opioids issue has changed. Hortman and Gov.-elect Tim Walz have both committed to supporting the bills. And while the specific programs and policies in the measures might still be in flux, Eaton said she expects something to pass early in the 2019 legislative session.

“I think it is as close to a done deal as you can have at this point,” she said.

“The goal of the bill is to treat addiction like the disease that it is, just like if it was a cardiac issue. And to get rid of prejudices against people with addiction and the disease itself.”

Senate Finance Committee Chair Julie Rosen will take lead on efforts to fight opioid abuse in that chamber in 2019. The Vernon Center Republican was the prime sponsor of the Senate’s bill on the issue in 2018, Senate File 730 , and would like to pursue similar legislation during the next session.

Among other things, she said she wants a dedicated source of money to pay for addiction treatment and to care for out-of-home care for children of addicted parents. “There’s some frustration from the general public that nothing was accomplished” last year, Rosen said. “And I think the pharmaceutical companies need to be accountable because we have some real needs and it frustrates me that we still have to take care of them out of our general fund dollars.”

The 2018 Senate bill was similar to the measure introduced in the House, House File 1440, which was sponsored by Rep. Dave Baker, R-Willmar. Like Eaton, Baker lost a child to opioids. His son Dan died in 2011.

The bills combined education, treatment, new prescribing rules, monitoring of sales and a new panel, an Opiate Stewardship Advisory Council, to oversee the programs, which would be paid for with new revenue. That money would also pay for grants for promising practices to battle the epidemic.

While the penny-a-pill fee funding mechanism fell out of the bills, another version of Rosen’s bill — which raised the same amount of money via a licensing fee — passed the Senate 60-6. The fees would be based on the volume of sales each company has in the state and would have generated millions of dollars of revenue. That compares to the $235 yearly license fee currently charged the drug makers.

But while Rosen’s bill passed the Senate with broad, bipartisan support, it never came to a vote in the House.

When asked at the end of the 2018 session about the accusation that he had broken a promise to hold a vote in House on the bill, Daudt said he didn’t think there were enough votes in his caucus to pass it. “We just simply didn’t have the votes for it and that’s not uncommon in the House,” Daudt said last May. “In an election year, people will see that as a tax increase and people don’t want to raise taxes in an election year.

“But we also didn’t see it as punishing opioid companies or manufacturers. We saw it as helping Minnesotans,” he said. “And we found we could help Minnesotans regardless of what you did to opioid companies. I believe opioid manufacturers will get their day in court and they will get their punishment if they have been bad actors but I never believed that was the Legislature’s job to do that.”

Though some of the provisions included in the Rosen and Baker bills were also included in a huge omnibus bill — but with much less money from general fund rather than a dedicated sources — that legislation died when Dayton decided to veto it.

Eaton said she had urged Dayton to veto the bill because it contained lots of unrelated legislation that she considered bad public policy, including the use of state general fund revenue for the opioid response. “The taxpayers have paid enough. We don’t need taxpayer funds to pay to remedy the situation,” Eaton said in May. “In the end Big Pharma and the chamber and Medical Alley won. The victims, their families and the Minnesota taxpayers lost.” 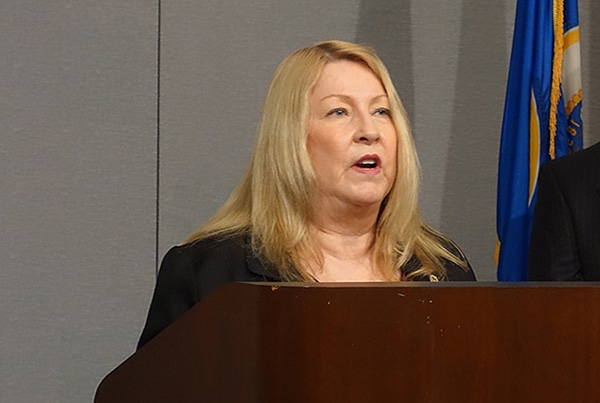 State Sen. Chris Eaton: “In the end Big Pharma and the chamber and Medical Alley won. The victims, their families and the Minnesota taxpayers lost.” (Photo by Peter Callaghan/MinnPost)â

Since the end of session, state Attorney General Lori Swanson has filed a lawsuit in state courts against the maker of OxyContin, the Connecticut-based Purdue Pharma. The suit, that Attorney General-elect Keith Ellison says he will continue, claims the company violated state consumer fraud laws by misrepresenting the risks of the potent painkillers. The suit claims the companies minimized the addictive nature of the drugs, told prescribers that they needn’t limit doses and overestimated the length of its effectiveness in patients.

Earlier lawsuits have been filed by the city of Minneapolis and a coalition of county attorneys. All seek to have the drug makers reimburse the governments for the cost of responding to a crisis that has so far killed 401 Minnesotans, according to state Department of Health assessments.

Another change since the end of the 2018 session is the passage in Congress of a bipartisan opioid response bill that was signed last month by President Trump. Among the provisions is a grant program to expand what are known as comprehensive recovery centers, which combine addiction treatment with job training and mental health counseling. The bill also expands Medicare coverage for treatment and expand the use of telehealth services for substance abuse.

Rep. Jennifer Schultz, DFL-Duluth, is likely to be one of the leaders on the issue in the Minnesota House in 2019. A University of Minnesota-Duluth economist, Schultz specializes in health economy and policy and hopes to work on the opioid issue during the upcoming session, perhaps on a subcommittee or as a lead sponsor of legislation.

“For me the priority is having the funds available to address the problem and put that responsibility on the pharmaceutical companies who are manufacturing the drugs and pushing them out to the public,” she said. “We want to make sure our incentives and disincentives are aligned. So I think we should tax or put a fee on the producer of the drugs and make them take responsibility so maybe they’ll stop producing them or maybe they’ll come up with an alternative that is not so addictive.”

Schultz also thinks the Legislature needs to broaden it focus to other addictive drugs including meth and heroin and take action to increase availability of addiction treatment.

As it did last session, the pharmaceutical industry will continue to oppose any taxes or fees on prescription drugs — including OxyContin and generic opioids — as a means of funding the fight against opioid addiction, calling it a bad precedent to raise taxes on drugs that people need.

“A new tax on prescribed medicines that meet legitimate medical needs is not an appropriate funding mechanism for a state’s budget and a dangerous precedent to set,” wrote Nick McGee, director of public affairs for PhRMA, the association representing pharmaceutical companies.

McGee said the industry is willing to continue working with the Legislature and has supported other provisions in the bills, including reducing the time that an opioid prescription can be honored by a pharmacy from 30 days to seven. The industry also supports a registry that would allow doctors to track the prescriptions issued to a patient by other providers, a tool to fight what is known as “doctor shopping.”

PhRMA has also proposed using some of the money already flowing to states as part of the federal Medicaid Drug Rebate Program to pay for opioid addiction response programs.

The election of Tim Walz as governor also increases the chances that some form of opioid legislation — with dedicated funding — will become law. While his opponent in the general election, GOP nominee Jeff Johnson, said he opposed new taxes, fearing they would add to the cost of drugs for consumers, Walz was supportive.

“It makes sense at the front end to make sure we’re prescribing in the right manner, making sure we’re giving the tools to law enforcement, making sure we’re asking the folks responsible for creating these (drugs), to be part of the solution,” Walz said during a KSTP debate in October.

And at a pre-election forum on the issue that included Eaton and Baker as well as a representative from PhRMA, then candidate and now Lieutenant Governor-elect Peggy Flanagan pledged that the Walz administration would support penny-a-pill or comparable funding.

While Rosen appreciated Walz’s support, she has also questioned whether he has created mixed messages by also supporting the legalization of marijuana for recreational use.

“It’s going to be a very difficult discussion to move a bill like that forward when you have a governor who is looking at legalizing marijuana,” Rosen said. “And it’s very disingenuous to talk about working on a drug addiction while you want to legalize pot. You will be creating some other unintended consequences. People need to recognize that. It’s not all about the revenue.”

Eaton agrees, though she thinks she might be the only Senate Democrat who opposes the legalization of recreational marijuana. Eaton said she does support decriminalization of marijuana and thinks legalization is “inevitable.”

“But I don’t see it as a positive thing,” Eaton said. “We don’t do alcohol well. Why would we want to do another one?”