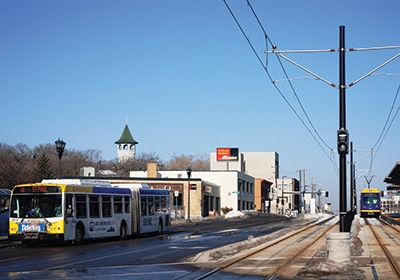 When Metro Transit’s Green Line LRT opens next month, it will render more than 500 daily bus trip superfluous. Or not.
By Adam Platt
May 01, 2014

Or not. Turns out, the agency plans to eliminate only one of the three routes, which run, often literally, adjacent to the line, and it will not reduce its fleet or total bus trips.

Currently 26,000 riders use routes 16, 50 and 94 on an average weekday, says Metro Transit director of service development John Levin. Route 16, which most know as the University Avenue line, will drop from 10- to 20-minute frequencies and no longer travel into downtown Minneapolis. Route 50, the limited-stop line to the University of Minnesota, will go away entirely. And Route 94, the express freeway route, will maintain weekday service, but run less often nights and weekends. (The nonstop 94D will still best the Green Line’s 40-minute downtown-to-downtown trip time.)

Buses and drivers excessed from these east-west trunk routes will be reallocated to serve lines funneling passengers to the Green Line (mostly north-south routes).

That the transit agency is not choosing to reap all possible savings may be counterintuitive, but Metro Transit has reasons. LRT stops are up to a half-mile apart, says Levin; Route 16 stops every eighth of a mile, a significant difference for the mobility challenged. Route 94 “has a significant commuter market with heavy end-to-end peak ridership,” Levin says. “They are riders concerned about travel times,” and the agency isn’t sure they will find the stop-and-go on the Green Line a satisfactory substitute.

Green Line service will not resemble the LRT speedway along Hiawatha. Trains will have “signal priority,” as in downtown Minneapolis where the stoplights cycle slightly to the train’s benefit, rather than signal “preemption” on Hiawatha, where the LRT causes the lights to change.

Metro Transit admits that guesswork is involved, and understands adjustments may be inevitable. “You have to make some assumptions,” says Levin. “But we know how our riders use the system.”