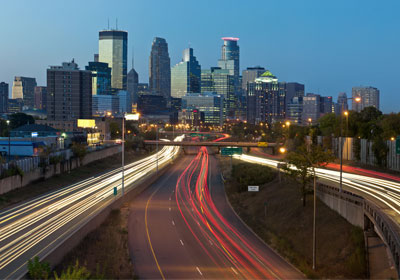 Will A Minimum Wage Hike Drive This Business Out Of Minneapolis?

The owner of 1-800 Radiators & A/C of Minnesota said a $15 minimum wage will make it difficult to compete with competition elsewhere in the metro.
January 15, 2017

Editor's Note: This article is part of our January 2017 feature story on Minneapolis' business climate and the impacts of the city council's attempts to raise wages and alter workplace policy. Read the full story here.

Trevor Anonsen owns 1-800 Radiator & A/C of Minnesota, a wholesaler of auto parts based in a light industrial area north of downtown Minneapolis. Unlike the white-collar office towers of downtown, this portion of Jacob Frey’s Third Ward may be substantially impacted by a $15 minimum wage.

Unlike the purveyors of socially responsible bagels and other vocal southwest Minneapolis businesses, who have welcomed lesser profits in exchange for economic justice, Anonsen’s business has not been consistently profitable in recent years and is unable to fathom an environment where his wage base rises by a third.

As a wholesaler that markets a commodity product to price sensitive resellers that can obtain identical goods from any number of competitors, Anonsen’s concern is the regional wage disparities that will result. “All but one of my competitors are outside the city borders, and we all serve the entire metro area,” he explains. “If my costs rise, I can’t pass them onto customers.”

Anonsen says he has read the wage study commissioned by the City Council. He sees several flaws. “The study focused on businesses that have strong pricing power—medical services, restaurants,” where people are unlikely to switch to suburban doctors or eateries to save a small amount of money. “The study also doesn’t ask what happens when much of the local workforce making above minimum suddenly finds itself making minimum wage. Won’t they expect to make more?”

Anonsen has seen a competitor move to Hudson, Wisconsin to take advantage of the state’s tax and wage environment, while others are based in suburbs that would be unaffected by a Minneapolis hike. He likes being centrally located and adjacent to all area freeways, but if the city’s wage laws render him uncompetitive, “at $15 an hour it will take me less than a year to recoup the costs of relocation,” he notes. “At $13 an hour it would take 2.5 years.”

Though 1-800 Radiator does not pay any of its 11 employees minimum wage, half earn under $15 an hour. “My concern is if the minimum rises to $15, will my employees now making $15 be satisfied making minimum wage or the same wage as my entry level staff?” asks Anonsen. “Of course they won’t, so I’m going to end up raising their pay as well.”

Anonsen also wonders about the ripple effect when he gives 40 percent raises to employees who are then still making minimum wage. “My jobs are physical, in a warehouse environment that isn’t always an optimal temperature, they are on their feet all day,” Anonsen continues. “If far less skilled and demanding jobs suddenly pay $15, are they going to stay with me if I don’t raise their pay even more?”

Anonsen attended one of councilman Frey’s monthly listening sessions in his ward and said Frey, who is running for Mayor, was interested, but disappointingly unfamiliar with many of the economic arguments he was making. He said Frey deemed a city wage hike a “sure thing.”

“I’m resigned to it,” says Anonsen, “it will come down to the amount and phase-in to determine whether I can afford to stay.”