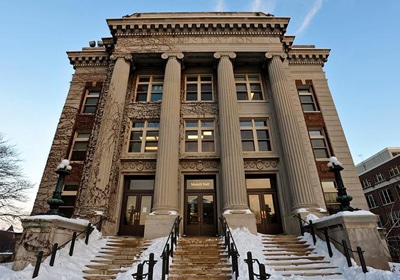 Will A $2,000 Tuition Hike Hurt The U’s Ability To Recruit Out-Of-State Students?

Because they generally pay higher tuition, out-of-state students are a key part of the University of Minnesota’s annual budget—especially in the face of decreasing support of the school from legislators in St. Paul.
June 12, 2016

Daniel Hofstetter, who comes from a town in northeastern Ohio, is part of a growing demographic at the University of Minnesota’s Twin Cities campus: students from outside of Minnesota, Wisconsin and the Dakotas.

Now a senior studying neuroscience and psychology, he chose to attend the University of Minnesota for a few reasons, among them: that it was a campus he liked (despite the threat of harsher winters), it had strong academics and an education that wouldn’t, relative to some schools, cost a fortune.

But that last point may be changing. In June, the U’s Board of Regents will consider a tuition proposal from President Eric Kaler that would, among other things, increase the advertised cost — not including any grants or scholarships — of attending the U for out-of-state students at the Twin Cities campus by $2,040, or about 10 percent, the largest increase for out-of-state students in years. (Students from states with reciprocity agreements, including Wisconsin and the Dakotas, would not be subject to the nonresident hike.)

The proposed increase wouldn’t affect Hofstetter in full, because the plan caps any increases for current students (and incoming students this fall) to 5.5 percent per year through 2019-20, but he says he’s concerned about the hike’s effect on future out-of-state students.

Kaler's proposal would bring in an estimated $13.2 million in new tuition revenue, money he suggests is needed, in part, because the state didn’t fully fund the U’s request to hold tuition steady for residents, or provide additional state support for 2016-17, in last year's legislative session.

Like any plan to raise tuition, the proposal has sparked some controversy: Officials maintain it would bring the U’s nonresident tuition closer to what its peers charge out-of-state students. One lawmaker said the hike for nonresidents is not big enough, and suggests the U cut resident tuition and raise nonresident tuition by much more. Meanwhile, some students say the hike is too big and could deter students from other states from coming to the school.

But will a $2,000 tuition increase really discourage students from other states from attending the U?

Econ 101
That’s a question of demand elasticity, which, as any student paying attention in Econ 101 should be able to tell you, measures how sensitive consumers are to changes in price.

Demand elasticity rides on several things, including how many substitutes for the good in question are available, what percentage of the consumer’s income the good costs, its perceived necessity, brand loyalty and who’s footing the bill.

How elastic is the demand for a college education?

Not terribly, said Bradley Curs, an associate professor of educational leadership and policy analysis at the University of Missouri.

“Most studies have continued to show, especially at public institutions, that overall elasticity tends to be pretty inelastic, meaning that as price goes up (demand) decreases but not at the same rate price went up,” he said.

Out-of-state students are probably more sensitive to price than in-state students, Curs said — they may be looking at several research institutions in different states.

“Location, amenities, specific programs — out-of-state students are drawn to specific institutions much more because of those things. In-state students might just be drawn because it’s the state school,” he said.

In general, economic theory predicts consumers will demand more of a good when the price of it drops. When the price for new nonresidents dropped by about $7,000 during the recession — an effort to bring in more out-of-staters — the number of nonresidents did increase, and the increase was larger than previous years. (Those numbers don’t account for whether or not more nonresidents applied for admission, however.)

Bargain price
Though the cost of attending a university has increased significantly in the last few decades, a college education is still widely perceived as a necessity, another factor that dulls consumers’ sensitivity to price — especially when they don’t have to cut a check for the lump sum right away.

Nonresident tuition at the U has tended to be lower, in part, to entice students from warmer climates to a place where the thermometer hits 20 below, said Robert McMaster, vice provost and dean of undergraduate education.

But, “As attractiveness and national reputation of the University continues to increase, the University can move deliberately towards nonresident tuition models more closely resembling peer institutions,” Kaler's proposal reads.

Out-of-state increase
There’s a political side to all of this as well. As state support for public higher education continues to decline, schools are under pressure to squeeze extra pennies out of nonresident students, because they’re often limited in their ability to raise resident tuition, Curs said.

“Institutions are really ratcheting up nonresident tuition price to bring in more revenue,” he said.

When you look at a university budget, the most flexible sources of revenue — not earmarked for specific purposes like research grants or gifts — tend to be state money and tuition revenue, said Jennifer Delaney, an associate professor of higher education at the University of Illinois at Urbana–Champaign. So it makes sense to see universities seek tuition revenue to make up for lost state support.

Some public universities are facing backlash for the extent to which they’ve enrolled out-of-state students: Earlier this year, a state audit of University of California schools argued UC had “undermined its commitment to resident students” by increasing enrollment of out-of-state students to reap tuition benefits (25 percent of undergrads at UC Berkeley in the 2015-16 school year and 23 percent at UCLA were nonresidents).

McMaster said relatively low out-of-state tuition at the U means the school has less incentive than other schools to give spots to nonresidents for financial reasons.

“It's been a lesser of a goal for us than other places,” he said. “The major goal for us was to become a more geographically diverse undergraduate institution.”

At the U’s Twin Cities campus, the share of nonresident students — students from states other than Minnesota and reciprocity states, and international students — has been gradually increasing for years. In 2000, such students made up about 7 percent of all undergraduates, while in the 2015-16 school year, which just wrapped up, they made up 20 percent.

There are no quotas when it comes to admission at the U, McMaster said. But in general, the institution’s goal is to have 65 percent of freshman admits come from Minnesota, and to increase the number of nonresident students — both from the U.S. and abroad.

How will the hike affect those ambitions?

The size of the U’s nonresident tuition increase, and the institution’s relative inexpensiveness for such students, makes the hike even less likely to be a barrier for most students, Nassirian said, adding that some might make the argument that being priced lower than peer institutions hurts perception of the U’s prestige.

“This is a very prestigious institution, and I do not believe it will face any adverse consequences in terms of numbers,” he said. “I'm confident they're going to have exactly the number (of nonresidents) they want, and frankly, they could probably increase the price by 50 percent and not suffer any kind of numerical losses.”