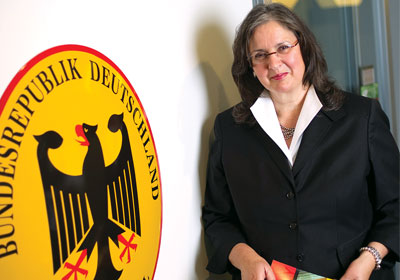 Minneapolitan Christa Tiefenbacher-Hudson is one of five honorary German consuls in the U.S.
July 11, 2010

As of 2007 (the most recent year figures are available), Minnesota was home to 117 German company affiliates that employed 9,300 people and had invested $1.4 billion in Minnesota plants, property, and equipment. The connection runs the other way, too: In 2009, Minnesota companies sold $652 million in products to buyers in Germany.

Christa Tiefenbacher-Hudson, the new honorary consul of the Federal Republic of Germany for Minneapolis, helps nourish those business relationships. Sworn in on March 26, she replaced University of St. Thomas professor Heino Beckmann, who retired after 15 years as honorary consul.

“Part of my work is to host business delegations from Germany that may want to establish business relationships or set up a business in Minnesota,” Tiefenbacher-Hudson says. In addition to greeting these travelers, she identifies potential partners and sets up meetings. “We make sure that the visit is really productive,” she says.

A native of Stuttgart who moved to Minnesota in 1982, Tiefenbacher-Hudson is a founding member of the Minneapolis-based German American Chamber of Commerce. She also is the founder and managing director of Minneapolis-based TripleInk, a multilingual marketing communications agency that’s now a division of Martin Williams Advertising. As consul, she and an assistant hold office hours there two days a week.

TripleInk, which Tiefenbacher-Hudson founded in 1991, develops cross-cultural print and digital marketing materials and advertising, typically translating English material into other languages without losing the meaning and nuances of the original. Clients have included St. Jude Medical, AT&T, and Scotts Miracle-Gro.

Within a district that encompasses Minnesota, the Dakotas, and western Wisconsin, Tiefenbacher-Hudson serves as an ex-officio public diplomat, greeting visitors and officially opening such functions as the German American Health Care Forum, held in April at the University of Minnesota.

Tiefenbacher-Hudson also can save German expats a trip to Chicago for obtaining passports, registering to vote in German elections, and receiving the German equivalent of Social Security payments. German citizens can call her if they’re arrested, as recently happened when one man called her office to ask for help in dealing with a drunk driving charge. (As a consul, she can offer moral support in such situations, but not legal advice or representation.)

“This is an opportunity to serve both my native country and my adoptive country,” she says. “I can contribute to the mutual understanding between our countries.”