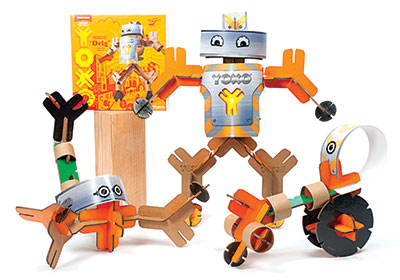 Jeff Freeland Nelson wanted his toy kit Yoxo in the store, so he watched it. Closely.
By Adam Wahlberg
April 01, 2014

Jeff Freeland Nelson knows his original business plan for his toy company Play From Scratch sounds kind of creepy, but he’s putting it out there anyway.

“We rented an office across the street from Creative Kidstuff in St. Paul during the year and a half we were developing our product, just to keep an eye on them,” he says with a chuckle; he understands that in a different context the company might have requested a restraining order for this kind of behavior. “When I was at my I desk I could look up and see their sign. It helped me focus on our goal, which wasn’t to be in every toy store in the country. Just theirs.”

And it worked—sort of. Creative Kidstuff was interested in his idea of cardboard connectors, made out of sustainable materials, cut into vibrant Y, O and X shapes, that kids can arrange in infinite ways. It just wasn’t interested in a serious relationship. More courtship was required.

“Their reasons were good ones. We had made a product that was very big, and it would have taken a lot of shelf space. Even though we had done our research and spent a lot of time in the store and talked to some of their merchandisers, we hadn’t talked to the buyers, the people who actually make the decision,” he says.

The buyers suggested changes to the design and packaging so they could fit the thing on their shelves. Nelson listened. As a newcomer to the industry—he had left a job as managing director of public strategies at American Public Media in 2010—he was smart enough to know that they knew the industry and he didn’t.

“I wasn’t in the meeting all cocky, thinking, ‘You need to buy this because this will make your year.’ I went in there thinking I have what I think is a great idea but I need your help. They responded well to that,” he says. Six months later he was back, this time with a product, Yoxo (pronounced “Yock-so”) that’s a little more restrained in its materials and packaging, which suited the company’s specs and could fit more comfortably on shelves.

The company appreciated being listened to and said yes, and even asked for a first-time exclusive.

“When we were first introduced to Yoxo we saw its potential but knew that it needed more to stand out, not only on our shelves, but in the toy space overall,” says Roberta Bonoff, CEO and president of Creative Kidstuff. “Jeff and his team were very open to our suggestions as to how to package and market the line in a way that would help it get the attention it deserved. Yoxo has done wonderfully in our stores and online.”

The product hit Creative Kidstuff’s shelves in August, and Nelson has been delighted, and a bit harried, to keep up with the demand.

“At the end of December, Creative Kidstuff asked to do a massive re-order and we couldn’t do it, we were just sold out,” he says, noting that the company put on three shifts at the time to keep up with holiday demand. “We’ve had some all-nighters.”

The company is still in an early stage and growing, so Nelson isn’t throwing any parties quite yet; the orders are for hundreds of units, not thousands. But signs indicate the company may get there, since other retailers have jumped on board—including big ones, like Bibelot and Peapods—and the company’s products are now being sold in 12 states. And it all started with that one-store strategy.

“For us it was about getting to know one ideal customer and asking for their advice. Ours is a physical product, sure, but we view it as like making software, something you can adjust,” he says. “The key is to really listen to that one key customer, because if you can get one customer, you can get another.”

Next up for Nelson is to build out more products so instead of offering outlets three products, which he has now with the Yoxobot Original, the Yoxo To Go and the Yoxo Mega Builder, his company can offer a line with five, six or seven products.

His next line of toys is well underway, Nelson says, and he estimates it will be done by June and in stores by October. And then he will know if his business is as sustainable as his products.