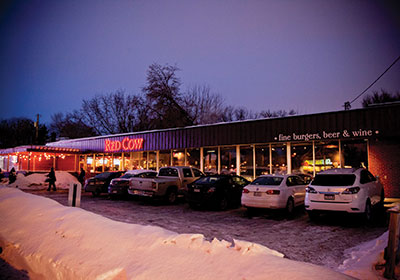 Why These Restaurants Have Poor Parking

As restaurants replace marginal retail, no one knows where to put the cars.
By Burl Gilyard
April 01, 2014

As restaurants increasingly replace other retailers in Minneapolis and St. Paul, residents are increasingly at odds with the evolving nature of urban commerce.

When Luke Shimp turned a derelict Blockbuster into Red Cow restaurant in southwest Minneapolis, it was a welcome addition to the Fulton retail district near 50th & France. “Business has been great,” Shimp says of 122-seat burger restaurant, which opened in February 2013.

But with a parking lot suitable for a Blockbuster, Red Cow’s overflow immediately populated the neighborhood with parkers. Though most area residents own garages, they complained nonetheless, and got the city to designate a Critical Parking Area with permit requirements. Red Cow sued and won a temporary restraining order to block the measures.

Minneapolis hopes customers for the growing restaurant row on 50th use Edina’s ramps just west of the city line on France Avenue. But that’s not sitting well with Edina city manager Scott Neal, who noted his “annoyance” in a blog post pointing out that Edina property owners bear the cost. Red Cow is two blocks from the border.

Fulton area Minneapolis City Council Member Linea Palmisano is sympathetic, but notes that “Minneapolis is not going the way of investing in more free parking,” in keeping with the city’s growing effort to discourage auto use and increase population density.

In February, Red Cow, the city and the Fulton neighborhood organization brokered a compromise that allows for a mix of permit and open parking. It will apply to the latest new restaurant, Agra Culture, which is set to open in the old Bead Monkey space kitty-corner from Red Cow.

Shimp is opening the second Red Cow this year on the site of a sleepy tavern in St. Paul’s Cathedral Hill, and knows the potential for similar contretemps exists. It seems everyone wants more dynamic retail and dining except the people who live around it.