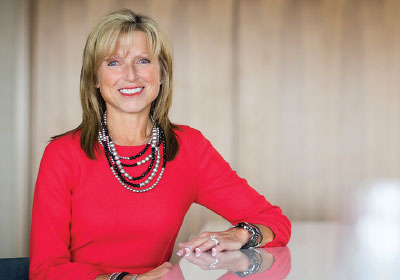 Why One Investor Is Optimistic For 2017

Carol Schleif launched her investment career in 1983 as a market strategist with Piper Jaffray & Hopwood. In August, she was promoted to deputy chief investment officer for Abbot Downing, which manages $37 billion in client assets for ultra-high-net-worth clients. Abbot Downing is part of Wells Fargo.

Schleif now has national responsibilities, but continues to be based in Minnesota. She sat down with Twin Cities Business in Minneapolis to discuss her investment outlook. What follows are excerpts of the interview, which were edited for length and clarity.

Q: When you look at the economy in 2017, what are your overarching expectations in terms of growth and other key indicators? Do you think we will see more robust growth?
A: There is a distinct likelihood that we may see a higher growth trajectory. Even at the margin, business optimism is greater than it has been in some length of time because when you look at the last six or eight years, it has really been a trying-to-avoid-depression period of time. We were eking our way along with monetary policy being the only factor at play.

And now you’ve got a lot of conversation about fiscal policy, about government at the table, about keeping business at the table. So if you are a business owner and thinking about bringing people on or expanding a plant, the optimism is definitely on the uptick. But similar to what the markets have done since the election, they are also presuming a higher level of inflation. So that is another one of the areas that we will be watching closely. Does the bond market overshoot like most markets are wont to do and run ahead of where the fundamental inflation is? So that will be something for investors to keep a close eye on.

Q: What are your observations about what may happen with American workers? Toward the end of 2016 we were seeing that wages were going up slightly. We have heard a fair amount of discussion about labor shortages.
A: We suspect that workers, to the extent that inflation does tick up, will be one of the primary beneficiaries. It may take a while to cycle through large companies to address incomes. But we’ve never stepped on the accelerator at the Fed level with the country being at full employment and the country is at full employment. You’ve got boomers rolling off, and you’ve got well-educated millennials moving in. So there is just a lot of pressure on the wage front, particularly for the most highly skilled.

Q: When you look at the state of the U.S. economy, what are you the most optimistic about in 2017?
A: The elections obviously were very raw for many, many people, but there were a lot of people discussing different issues. There’s a chance to take a fresh look at a lot of different things and have different players at the table. We all have a chance to get involved. That’s a huge positive in the long run if we can shake up the status quo and look at things differently. I’m also optimistic that we’ll see some real thought process around training and education. You’ve got the discussion about do we limit the tech visas for people coming in. If that does transpire it’ll mean that we have to innovate pretty rapidly in terms of improving our STEM training. It’ll accelerate that process and I think that’s healthy.

Q: What worries you the most about the U.S. economy in 2017?
A: The interest rates if the bond market overshoots and people start to worry because the bond market dwarfs the stock market in terms of overall size. There are an awful lot of people invested in bonds, and bond funds in particular, who haven’t seen real losses in their portfolios up until the last couple of months, and if that comes unwound in a big way, that could be pretty nerve-wracking.

Q: As someone who works with high-wealth clients, when you look at the changes in Washington—a new Republican president and a Republican-controlled Congress—what are some of the key issues you are going to be watching?
A: I think tax rates, both corporate and personal. Many of our clients run smaller businesses, or have come out of small businesses or run funds that invest in small businesses, so lowering the individual tax rate would disproportionately help many of those small businesses. So taxes are a key thing, including what goes on with the estate tax and how that factors through. We will also be watching what happens with the carried interest [that affects] hedge funds and private equity.