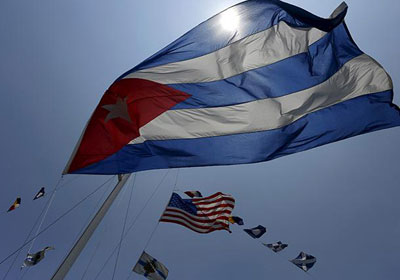 Why Is Minnesota’s Congressional Delegation So Focused On Cuba?

Since the thaw in relations that followed an unexpected prisoner swap late last year, Minnesota’s representatives have wasted no time getting involved in Cuba policy.
July 03, 2015

WASHINGTON — Since the thaw in relations that followed an unexpected prisoner swap late last year, Minnesota’s members of Congress have wasted no time diving into the relatively uncharted waters of U.S.-Cuba diplomacy. In the House and Senate, Minnesota legislators have introduced bills, traveled to the island, and — in the case of Sen. Amy Klobuchar — become at least minor celebrities among the Cuban people.

Klobuchar has been in the vanguard of congressional response to the opening with Cuba. In February, she introduced the Freedom to Export to Cuba Act, a bill that would essentially kill the half-century-old trade embargo. She also co-sponsored Sen. Jeff Flake’s (R-Arizona) bill to end the travel ban to the island, and in May, she successfully got federal authorities to clear the Minnesota Orchestra’s travel from MSP Airport to Havana. Earlier in the year, Klobuchar traveled to the island with a congressional delegation, whereCubans recognized her face from news reports about the embargo-ending bill.

Sen. Al Franken has also been active on the issue. He went to Cuba over the Memorial Day recess as part of a congressional delegation. Speaking about his trip, he said he got “a tremendous amount of enthusiasm for the fact that it looks like we are going to be normalizing relations very soon.”

The senators’ House colleagues share their interest in the island nation. 4th District Rep. Betty McCollum traveled to Cuba last summer, and said she saw “saw the tremendous opportunities that exist between the people of our two countries to find common ground.”

8th District Rep. Rick Nolan has a Cuba connection that spans decades — in 1977, during his first stint in Congress, Nolan visited the island as part of a team that successfully negotiated the release of five U.S. prisoners. In December, Nolan called the re-establishment of diplomatic relations “a monumental step,” and plans to visit sometime this year. Along with Reps. Keith Ellison and Collin Peterson, Nolan co-sponsored the House version of Klobuchar’s bill ending the trade embargo.

On the Republican side, 6th District Rep. Tom Emmer has joined a small but vocal segment of the party that has welcomed the White House’s diplomatic push. The freshman lawmaker went to Cuba earlier in the year as part of a congressional delegation, and says the trip convinced him that the Cuban people are ready to do business with America. “Before the trip, you can be academic about [the issue],” he said. “Once you see the people, it’s not about leadership as much as it’s about people. They’re hungry for the next step, hungry for access to the marketplace.”

At the same time, Emmer said that U.S. and Cuban leaders would have to come to agreements about reparations for Cubans persecuted by the government, as well as extradition of individuals in Cuba wanted in the U.S. for crimes. “We can’t forget that this is personal for people,” he said, referencing Democratic and Republican colleagues who deeply oppose lifting the embargo. “This thing is going to evolve over time.”

Why Minnesota?
If it seems unlikely that Minnesota would be a hotbed of action on Cuba policy, well, that’s understandable. The state doesn’t have the usual factors that animate other states’ activity on Cuba — like Florida, whose large Cuban-American population holds strong views on the issue, and whose business interests eagerly eye an untapped market just 90 miles away. Still, take a look at some of Minnesota’s most important economic interests — and the priorities of its representatives in Congress — and the Minnesota-Cuba connection begins to make sense.

Broadly speaking, there are three reasons why Minnesota legislators have been so active on Cuba politics, according to Eric Schwartz, dean of the Humphrey School of Public Affairs at the University of Minnesota. For one, the export opportunities for two of Minnesota’s biggest industries — agriculture and medical devices — are massive. For example, Minnetonka-based Cargill has lobbied aggressively to open the Cuba market. Acompany spokesperson called the embargo a “failed experiment” that has robbed the U.S. of billions of dollars in exports.

Beyond that, Minnesota’s lack of a large Cuban-American community, and its distance from the island, means lawmakers aren’t subject to the same pressures as representatives from states like Florida and New Jersey.

Emmer says there’s a bit of history to the Minnesota-Cuba ties: when limited agricultural trade was allowed a decade ago, Minnesota was “one of the first to lend a hand,” he said. “Minnesota has an ongoing relationship where others are just now starting.”

Still, it’s not like Iowans or Ohioans in Congress have been especially vocal in supporting the Cuba shift. Schwartz’s theory? “I think a number of our legislators in Minnesota happen to be reasonable people,” he said. “This is an embargo that, if your goal is to promote change in Cuba or promote U.S. exports, it’s hard to see how the embargo serves either of those interests.”

That’s not to say the embargo doesn’t have its defenders in Congress. Republican Sen. Chuck Grassley — who represents Iowa, the largest agricultural exporter in the U.S. — came down sharply on the U.S.-Cuba detente. Republican freshman Sen. Tom Cotton of Arkansas harshly condemned the Cuba developments, despite the fact that agricultural interests in Arkansas — a leading U.S. rice producer — appear eager for increased business with Cuba, one of the world’s top 20 rice consumers. (However, his Arkansas colleague, Republican John Boozman, co-signed the Senate bill lifting the travel ban.)

Klobuchar admitted she wouldn’t be able to convince all the Republican skeptics to get on board with her bill. “I don’t think it’s going to be unanimous,” she said, noting that perhaps 20 or so Republicans would need to support it. She expressed optimism that some may join, noting that Senate Agriculture Committee chair Pat Roberts, R-Kansas — who has signaled at least some openness to lifting the embargo — traveled to Cuba earlier this year.

Klobuchar said that during her visit, she was struck by how many Minnesotans were there as part of agriculture and business delegations. “Minnesotans have, in the last few decades, been international in reach — many big companies selling things abroad, agricultural interests, international adoption,” she said. “Cuba is part of this. They’re people we’d like to get to know.”