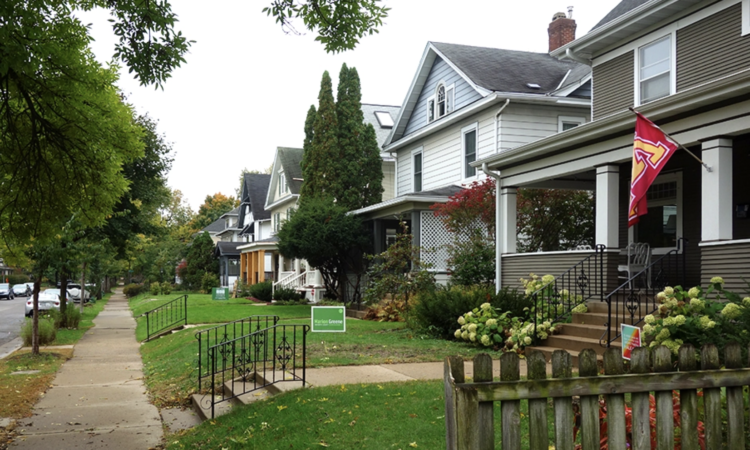 Even with higher interest rates, home prices show no signs of slowing down, yet. MinnPost photo by Peter Callaghan

Why Home Prices in the Twin Cities Keep Going Up

The rise in housing prices is nothing new, though prices weren’t rising quite this steeply until the pandemic hit.
By Greta Kaul
April 12, 2022

Anybody who knows anybody house hunting in the Twin Cities right now has probably heard the horror stories: in the current real estate market, some people are putting offers on houses far and above the sellers’ asking price — and getting beat by people making even higher offers.

Even with mortgage interest rates rising — and expected to rise more soon — home price increases show no signs of slowing down, yet.

Why prices are up

The rise in housing prices is nothing new, though prices weren’t rising quite this steeply until the pandemic hit. If you go back to about 2012, the market started to show a steady recovery from the price plummet of the Great Recession.

“The market rebuilt strong all the way through, up until the COVID pandemic,” said Chris Galler, the CEO of Minnesota Realtors. Then, the market picked up — for a few major reasons on both the demand and supply side of the equation.

Zillow Home Value Index by month for the Twin Cities, 2000-present
Zillow’s Home Value Index is designed to be a seasonally-adjusted measure of a typical home’s value in a market, reflecting homes in the 35th to 65th percentile range. 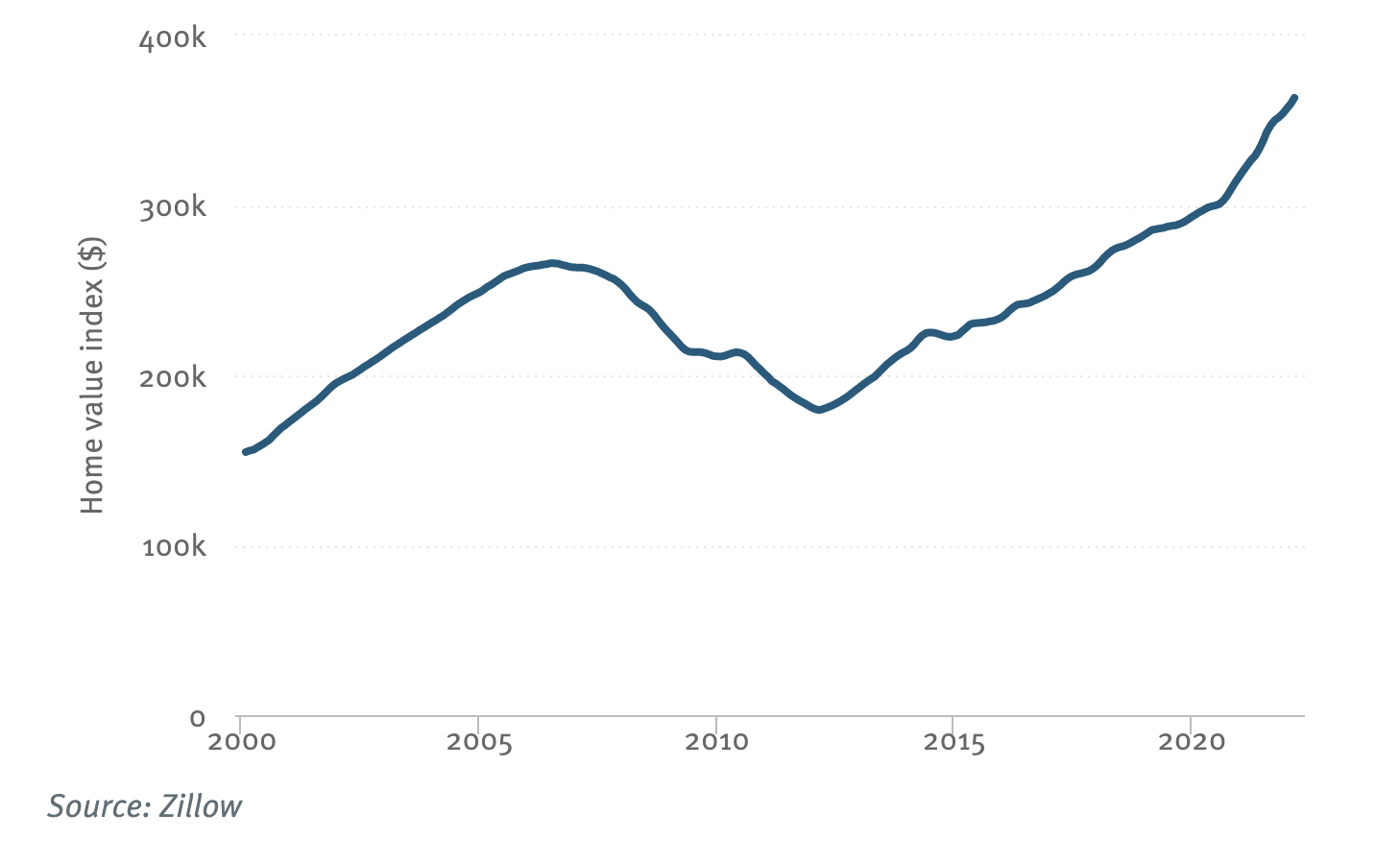 On the demand side, things went a little nuts during the pandemic. Many office workers were suddenly using their homes as offices. The kids were home from school, too, which caused many to re-think their living situations and what they wanted out of a home.

Between government stimulus checks and staying home, household savings increased, allowing some people to save up for down payments. At the same time, low mortgage interest rates — under 3 percent for a 30-year fixed-rate mortgage at times during the pandemic — made it cheaper to borrow money. 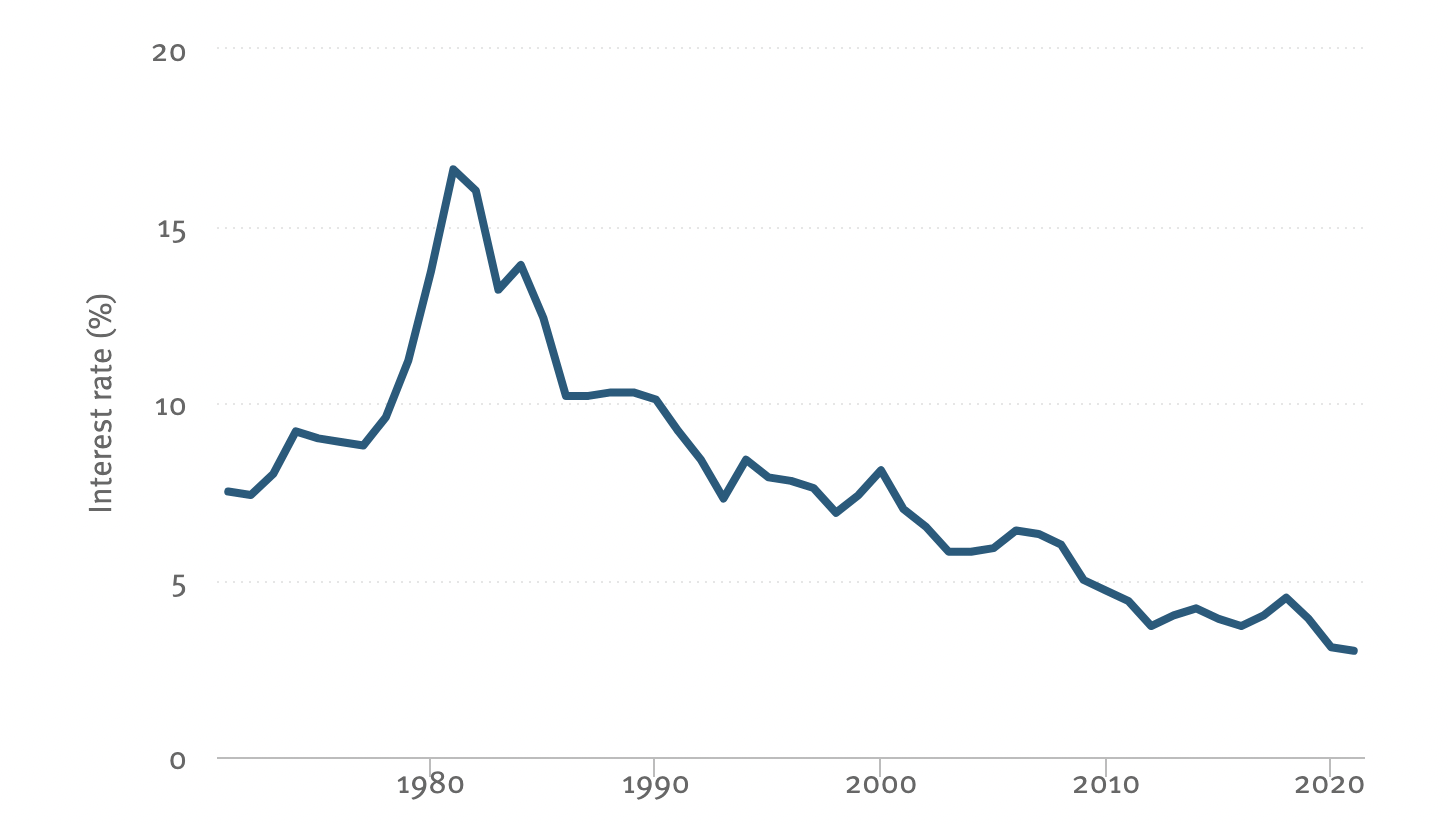 And on top of all that are generational dynamics. Many millennials — people in mid-late-20s to early 40s — are the biggest generation since baby boomers — are in a prime home buying age group, which means a lot of people are in the market. At the same time, baby boomers are living longer and staying in their houses longer than past generations had, restricting the supply of units on the market.

The supply-side issues have roots in the Great Recession, when the construction of homes ground to a halt after the bottom fell out of the real estate market. In Minnesota as elsewhere, the number of homes built lagged behind growth in the population.

“Supply is lagging demand at tremendous levels,” said Libby Starling, director of the Federal Reserve Bank of Minneapolis’ Community Development and Engagement Department, who estimates that the seven-county Twin Cities metro’s housing stock is short 80,000 housing units relative to what’s needed to keep pace with population growth.  “What we’re seeing is the pressure of demand when there’s simply not enough supply to meet it.”

While home construction has picked up, it’s not making up for the lost years. Additionally, the rising cost of building materials means new homes are less affordable than they might be otherwise.

Put the demand and supply issues together and you have a lot of competition for a limited housing stock. Realtors often consider the market to have good inventory levels if there are six months worth of homes for sale, meaning it would take about six months to sell all the houses on the market. Inventory has been a lot lower than that lately, dropping from 0.9 months last February to 0.7 months this February in the Twin Cities, according to Minnesota Realtors.

Low inventory and high demand has prompted realtors to try to entice sellers into the market. In high-demand neighborhoods, some realtors knock on doors or drop off flyers that encourage homeowners to sell their houses or specify the types of homes their clients are looking for, including their budget.

“We’re having to actually go and pursue things through all different avenues to find things for [buyers],” said Tracy Baglio, who has been a realtor in the Twin Cities for decades and is the former president of the St. Paul Area Association of Realtors.

It’s in this environment that houses are selling quickly. Stories of multiple over-asking offers within the first day on the market are common. And in the Twin Cities, sellers, on average, are getting 100.9  percent of the list price for their homes compared to 100.2 percent a year ago, according to Minnesota Realtors.

All the supply and demand mismatch has created an especially tough homebuying environment for people looking to buy in the lower end of the market, Starling said.

Starling said some analysis suggests that with tight inventory in the middle of the market, households that can afford $400,000 or $500,000 homes are instead placing high bids on homes under that budget, beating out lower bids. Investors, too, are able to put attractive offers on homes, driving up prices.

“[That’s having the subsequent effect on affordability for lower income households, for whom these are the only options,” Starling said.

Given fast-rising home values, Starling said it’s valid to ask whether this is another housing bubble, like the one that preceded the Great Recession. But the situation today is different in many ways that make it unlikely housing prices will see a major recession like they did at that time.

Leading up to the 2008 recession, people could borrow a lot of money to buy a house, without putting much — if anything — down, Galler said. This caused prices to rise as people paid large sums for homes. Lenders were also less scrutinizing of credit scores, which led some people to get in way over their heads, Galler said. When the Great Recession hit and home values dropped, many people were underwater on their mortgages, owing more than their houses were worth. Ultimately, there was a rash of foreclosures.

Today, Galler said, is different. Lending standards are stricter. Lots of houses are being bought with 20 percent or more down.

At a basic level, the fundamentals are pretty different now compared to then, Starling said, and without some huge factor — like the shutdown of a major Twin Cities employer that moves thousands and thousands of jobs out of the state, it’s not likely.

“I think the fundamentals are very much that we need more housing to keep up with household growth in our region,” she said. “Household growth is slowing but still we have a lot of housing needs to catch up on.”

While housing prices don’t seem likely to drop rapidly like they did when the 2008 bubble burst, there are some signs that the rapid growth in prices may start to slow down.

During the pandemic, there were a lot of factors injecting money into the economy: government stimulus payments, an increase in savings as people stayed home and low interest rates helped money flow, contributing to faster-than-usual inflation.

Mortgage interest rates began to tick up in early 2021. In mid-March, the Federal Reserve raised interest rates, and has signaled they will rise further – an effort to slow down inflation — in the future.

Even with interest rates rising steadily over last year and the recent rate hike — weekly 30-year fixed-rate mortgage interest rates averaged  4.7 percent in the last week, a jump from less than 4 percent in March — the housing market hasn’t shown signs of slowing down yet.

The effect of the recent rate hike, mid-March, likely hasn’t been seen in the market yet, said Andrew Babula, director of the real estate program at the University of St. Thomas Opus College of Business. Many people closing on houses now were locked into rates before the hike.

Behavior around housing doesn’t change as quickly as it does around, say, grocery store or gasoline purchases, Galler said. If you look at the trajectory of interest rates over time, they still remain very low.

Now, with interest rates expected to rise further, some people may be trying to buy quickly before they rise more.

But the effect of the rate hikes are likely to show up eventually, Babula said.

“The expectation is that is going to slow things down,” he said. Given that supply and demand issues remain, the rate will likely have some dampening effect on price increases but not stop them entirely.

“Prices will probably not continue to increase at the rate … they have been, but they’ll either remain pretty steady or slowly go up,” he said.

Still a good time to buy?

Given all the factors at play — rising prices and rising interest rates, a lot of buyers may be asking themselves whether now is a good time to buy a house.

That depends more on the homebuyer’s situation than it does on market factors, Galler said.

If people feel secure in their job, like the neighborhood they’re buying in, can afford the mortgage payment and plan to stay for at least five to seven years, those are good reasons to buy a house, Galler said.

“Price appreciation has been significant because of  low inventory the last few years and very, very low interest rates. But it probably will go back to a more normalized marketplace and that’s where that five to seven years really comes in,” he said.

Baglio said the fact that investors — who buy based on numbers and not emotions — are buying is an indication the market is strong.

Her biggest advice for prospective buyers in this market is to have patience in this competitive market.

“Just have patience for the right thing,” she said.