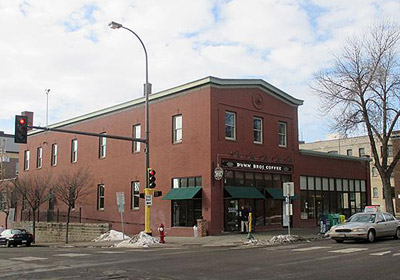 Why A Chef’s Simple Request May Completely Change Where Hotels Can Operate In Mpls.

The city's zoning ordinances don’t allow hotels of any size in many parts of the city. That may change thanks to Restaurant Alma owner Roberts.
February 13, 2015

In the space next door to the restaurant, currently home to a Dunn Brothers Coffee shop, Roberts envisions a casual cafe and bakery to complement the more formal Alma. Upstairs he sees a boutique hotel with six rooms: The Inn at Alma.

There’s a small hangup, however. While Minneapolis' land use regulations allow for the restaurant, they don't permit a small hotel at that location.

For one thing, the city's complex zoning ordinances don’t allow hotels with fewer than 50 rooms outside of downtown. But the rules get even tougher. As it is now, no hotels of anysize are permitted where Roberts’ building sits, only in larger commercial zones like Uptown, Stadium Village and the St. Anthony Main district, which lies just west of Alma's University Avenue SE location.

Okay, how about a zoning change then?

Ahhh, no. When Roberts, who opened Restaurant Alma in 1999, asked the Marcy-Holmes Neighborhood Association to support a zoning change, they weren't very excited about the prospect. That's because the area would have had to change its zoning to something known as  C3 A, or Community Activity Center, a move that would have allowed the hotel, said Roberts, “but all kinds of stuff the neighborhood doesn't want.”

It was then that the association suggested a different approach: see if the neighborhood's city council member, Jacob Frey, would be open to changing the land use code to make the small inn a permitted use in the existing multi-family residential zone.
Frey agreed, and has asked the city planning department to take a look at the zoning maps and code and suggest changes to what he termed “antiquated” rules. “It could be a really great European-style boutique hotel,” Frey said. “This has the potential to be pretty cool.”

Frey and Jason Wittenberg, land use manager for Minneapolis' Community Planning and Economic Development Department, both say that the intent is not to change the code just for one project, but to take a broader look at zoning that might block similar projects elsewhere in the city.

“It became apparent this wasn’t just a one-off problem,” Frey said. For example, current code allows Bed & Breakfasts in median-to-high density residential zones, in what is called office-residential zones and in the lowest density commercial zone dubbed C-1. But they can only have three rooms or fewer. “That very well could be something we look at,” Wittenberg said.
On the broader issue of where hotels can locate and how big they can be, Wittenberg added: “We’re seeing a lot of interest in hotels. It’s a good opportunity for us to update the code.”

Roberts said his idea for the two-story building he purchased in 2013 is for a “more-accessible” cafe in the space that Dunn Brothers now occupies, something less-expensive and more casual than Alma, which he describes as a “special-occasion” restaurant.

He said he hadn’t originally thought about the upstairs, where he set up an office, but got an idea from a Chicago eatery, the Longman and Eagle, that created a six-room inn above its bar and restaurant.

Roberts thinks room prices at the inn would fall in the middle of the range for Minneapolis hotels: $150 to $200. The inn, new cafe and a refresh of Alma is being designed by James Dayton Design.

None of which answers one of the central mysteries of Roberts' experience: Why is the Minneapolis code so hostile to hotels outside the downtown?

Wittenberg said he doesn't know the history of the code, but noted that motels have often been considered undesirable in residential areas. Frey said he heard a theory that allowing only large hotels outside downtown and restricting them to the busiest commercial zones was part of an anti-brothel campaign. Hotels with just a few rooms might be more than just a hotel.

Penny Petersen, author of the 2013 book “Minneapolis Madams — The Lost History of Prostitution on the Riverfront” said she hadn't uncovered any evidence of the city using hotel ordinances to keep brothels out of the non-downtown districts. Zoning, she said, was not common in cities prior to World War I.

But it is true, she said, that city officials “from 1868 to 1910,  tried very hard to contain brothels to certain areas, namely the riverfront. At one time there were three red-light districts along the riverfront that were more-or-less licensed by the city. Of course, the city would have preferred to stamp out the commercial trade entirely, but that proved impossible.”