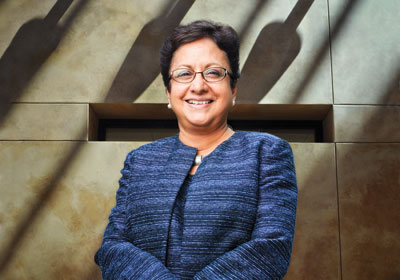 Which Metrics Will Move Carlson?

FOR ALL THE REFLEXIVE, BRAVE TALK one often hears in business circles about getting “the right person in the right place at the right time,” the odds against pulling it off are high. And it doesn’t get any easier in the border-world of a major university business school, where academia meets and melds with commerce. Amid all the daunting pedigrees and curriculum vitae, and the cross-currents of scholarship and entrepreneurial activity, what, after all, are the precise criteria for “right”?

Doubts and wild cards notwithstanding, the University of Minnesota’s 93-year-old Carlson School of Management, presents a picture of remarkably buoyant optimism with the choice of Srilata “Sri” Zaheer. As its new dean, she is charged with, probably first and foremost, taking the school to new levels of visibility and prominence.

The 58-year-old native of Chennai, India—and the first Indian woman to lead a major U.S. business school—has been on the U of M campus for 21 years; most recently she was Carlson’s associate dean of faculty and research, and spent nine months as interim dean while working her way through a competition with three external candidates. That process ended with her selection this past March.

Zaheer has the advantage of what feels like near-universal affection from faculty and students. Andrea Gorman, the undergraduate member of the 18-person selection committee gushed to the Minnesota Daily, “Students absolutely adore her.” Effusive praise of new top managers and glowing testimonials to their talents are, of course, standard corporate spin. But even to a jaded ear, compliments thrown Zaheer’s way come with an aura of fondness—not a routine expression in the business or collegiate world.

Her ability to “warm a room,” as the best salespeople like to say, was a key consideration for the search committee, who believed for this era the school needs a world-class salesperson, and Zaheer accepts that her primary challenges will be significantly different from her predecessor’s.

METRICS OF DECLINE?
Conventional wisdom says the Carlson School has slipped in recent years. Total enrollment—undergrad and graduate—is down roughly 500 students since 2009, to 4,501 as of April. The full-time MBA program is down from 217 to 172. This drop occurred as some less-pedigreed programs across the state saw enrollment climb. No one interviewed for this story expressed particular concern over this phenomenon, and the university points to 2012’s incoming class as the largest since the economic downturn.

But there are other worrying notes. Data from Forbes 2011 business school rankings showed Carlson MBA graduates saw a far lower percentage of salary gain than many elite business school graduates, while the nearby UW-Madison MBA offered a similar rate of salary appreciation for substantially less tuition [see graphics].

Carlson looks at the numbers in a more nuanced context. Spokesperson Steve Rudolph points out that many of its graduates are “career changers,” more than the typical business school, which has a “deflating effect” on post-graduate salaries. Carlson believes it produces more graduates who pursue careers in the nonprofit sector, also exerting downward pressure on salaries.

Finally, Carlson’s advocates focus on a different metric, one that positions the school in an extremely favorable light. “It’s true that the metrics of rankings are imprecise and subjective. But the ones we care about—the makeup of the student body, graduation rates, placement, and others—have all improved in recent years. The statistic that is most important to us is that 90 percent of students had jobs within six months of graduation,” says retired SuperValu CEO, Jeff Noddle, who chaired the school’s Board of Overseers, and also served on the selection committee.

Moreover, the school’s overall budget actually nudged up 5 percent in 2011, thanks mainly to investment income, gifts, and significant tuition increases. But all agreed that a fresh, concerted marketing effort is in order, hence the motivation to take the school’s story on the road, reaching out to alums, potential students, and faculty.

In fact, the entire suite of Zaheer’s skills might be measured by how well she and her staff move the school higher in the deeply arcane realm of school rankings. To an outsider the metrics used to create a standing of competing schools verge on the ridiculously opaque. At the Financial Times alone, there are rankings for program design, teaching methods and materials, faculty, aims achieved, future use, value for money, and international students, to name a few.

Zaheer can spin rankings with the best of them. “According to Business Week,” she says, “last year, our full-time MBA program was ranked No. 1 in placement. And this year, I don’t know how we get better than No. 1, but 80 percent of our full-time MBAs have been placed before graduation. Last year it was 72 percent.

“In terms of quality of faculty, we are rated No. 2 of public research institutions in the country, second only to [the University of California at] Berkeley among public research schools, and 14th in the world. And the things we are doing on social media and big data analytics, hopefully you’ll see something very soon rolling out on that front, are very exciting. We are working with the College of Science and Engineering on a business analytics collaborative. It is fascinating taking all this data available through Facebook, LinkedIn, Twitter, and all these sources, looking for consumer insights. Businesses are struggling with this. We see this as a tremendous opportunity to collaborate with business.”

Noddle notes that the school’s placement success with local companies has also had the effect of dragging down metrics that assign a positive quotient to how far-flung the alumni are. “For our purposes,” says Noddle, “it really isn’t practical to compare ourselves to private schools like Harvard or Stanford”—although as state support dwindles to next to nothing, the Carlson School has little choice but to behave more and more like a private college.

And Carlson’s reputation, if not the platinum caliber of Stanford, Harvard, MIT’s Sloan (from which Zaheer has a degree), or Penn’s Wharton School, is at least a well-buffed silver, with a placement rate that tonier schools have to envy. Generally speaking, the metrics for evaluating ROI on Carlson’s $76,000 tuition bill are positive, say observers.

The consensus is that the previous dean, Alison Davis-Blake, handed off an institution in solid (post-recession) financial shape, with a fortified faculty and acceptable-to-good interaction with the Twin Cities business community. (She left last year for the same job at Michigan’s lavishly endowed Ross School of Business.) At Minnesota, she whacked budgets, ratcheted up productivity, and expanded the school’s undergraduate program. But for all her considerable managerial talents, hardly anyone recommends Davis-Blake for her ingratiating personal touch.

Enter the socially adroit Zaheer. “[Carlson] has to be more outwardly focused at this point in its history,” says Judy Corson, co-founder of Custom Research Inc. and a member of the search committee. “It’s a simple fact of life that MBAs must have international work experience. It’s the world we live in.” (International work experience is required for a Carlson MBA.) The hope and expectation is that Zaheer’s Indian connections, along with her extensive work in Europe, will give the school entrÃ©e to a broader range of both student and faculty opportunities. On that last point, she has vowed to use all new tuition revenues for faculty compensation.

Carlson has two international partnership campuses, one in Vienna, and one in Guangzhou, China. It recently closed a campus in Warsaw. Zaheer, who was planning for a May “road trip” to London amid several domestic stops, remains open to additional partnerships, including at least one likely in India, as she barnstorms on behalf of the school, the university and the Twin Cities.

TAKING THE SHOW ON THE ROAD
“What I really see as my mandate,” she says, talking in her sixth-floor West Bank office, “is getting out and connecting with the business community and the alums, building connections to the rest of the world.” (Barely two weeks after this conversation, she was in London, where she found time to be interviewed by the Financial Times and The Economist.)

The school’s faculty, programs and student body—the “core,” as she says— are “very strong,” a strength for which she is quick to credit Davis-Blake, although it bears noting Zaheer was Davis-Blake’s No. 2 during her tenure at Carlson.

What needs attention today, Zaheer says, is fundamental person-to-person marketing. This is in sync with university President Eric Kaler’s guidance/admonition to all his deans: namely, to “tell the university’s story,” selling the school and expanding its brand beyond the region.

Zaheer accepts that she must serve as more of an emissary than her predecessor. “I think it is something that needs to be done. We weren’t always seen as welcoming [to] the outside world.

“There is no doubt this work needs my face time. In fact, when I look at my schedule I quickly realize it could suck up 100 percent of my time. I recognize, though, that I can’t do this all on my own, which is why I want to recruit the faculty for some of these road shows.”

A significant fact: Zaheer says the ratio of private philanthropy versus corporate funding to the school is currently better than 2-to-1. She proffers this as assurance that her outreach to the business community will in no way compromise the school’s independent curriculum, another point to which Kaler has expressed sensitivity, as the entire campus seeks revenue substitution for declining state aid.

ABOUT MORE THAN MONEY
“My message to the selection committee was that there is social pressure on us to be a force for good, that we have been perceived [as] punching below our weight.”

All but buried in her book-length rÃ©sumÃ© of degrees, awards, chairs, fellowships, and published papers is Zaheer’s youthful interlude as a journalist in Africa and India for a Swiss business publication. Or maybe you caught her in an Indian production of Howard Brenton’s The Education of Skinny Spew, where she was directed by her husband, Aks Zaheer—who, not coincidentally, is a professor of strategic management and former director of the Carlson School’s Strategic Management Research Center.

The two were a package deal when they were lured from MIT in the early ‘90s—intending to stay “maybe three years, at most,” says Sri—and have become, if legend can be believed, something of a hot ticket on the dinner party circuit. (Three Carlson notables mentioned the recent charity auction where dinner at the Zaheers went for a tasty $3,800.)

Zaheer and Aks are virtual poster children for international polymaths, both intellectual and cultural: They have been patrons of the Minnesota Orchestra since arriving in Minnesota, and among her subsets of expertise is a specialty in business ethics. She works up an impressive head of steam asserting the existence of a firewall that seals course work from external influences, and has publicly lamented the myriad ethical failures of “some, not all” business people.

Talking with the U’s campus news service shortly after her selection, Zaheer remarked, “Wealth creation is one of the greatest objectives out there. I’ve nothing against it. But it cannot be done at the expense of weaker groups. It has to be done in a way that is thoughtful and mindful of all the stakeholders involved—in the community and in the firm. This is a piece that we’ve lost in [the pursuit of shareholder wealth].”

Judy Corson likes the feel of the fit. The outward initiative, coupled with the encouragement to be more entrepreneurial, will, she hopes, catalyze the school. “I believe the faculty gets excited when they are more involved, which they will have to be.”

“The world of the faculty is extraordinarily competitive,” says Aks. “The demands for both research and teaching are very high. Very few who attempt it make the cut. But truly world-class faculty is attracted by world-class faculty. It is not merely a matter of compensation.” The implication: Enrollment and ranking will follow.