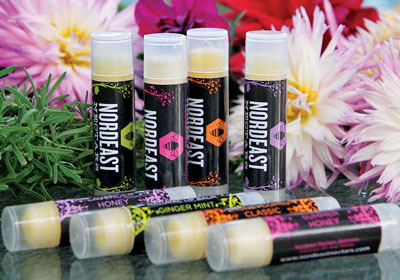 In the heart of Minneapolis, a couple beekeepers are imagining a honey empire, 1960s style.
April 11, 2012

Believe it or not, honeybees are happier in cities, where there is a diversity of flowering plants. “In rural areas, there are miles and miles of one crop and not much food for bees,” says beekeeper Corey Sax. “Honey from city bees tastes a lot better.”

Both have day jobs in advertising and marketing and say that their two-hive operation was initially more of a hobby. But when the 55 eight-ounce jars of honey they produced last year sold quickly, they realized demand for locally produced honey was escalating. But Minneapolis only allows two hives per property, so they decided to expand, creatively.

“Some of our neighbors have offered to host hives on their property, so we’ll be expanding potentially to eight hives come spring,” Britt says.

The honey-production cycle starts in April, when bees start to gather nectar from flowering plants within a two-mile radius. Harvesting occurs from June through September, after which the bees hibernate for the winter. Each hive can produce up to 150 pounds of honey per year, although Corey Sax says output is smaller the first year.

The Saxes will manage the hives. Their “hosts” will be paid in honey and a share of profits, co-op style. Next-door neighbor and avid gardener Paul Bramsen says it’s a win-win—that his plants have looked much better with the Saxes’ bees pollinating them.

The duo is hoping more people will come forward and offer their property for hives. “When we have a more collaborative approach, we can pool our resources and get wholesale prices for equipment and other economic inputs,” Corey says. “Also, we can make sure that we are not competing with each other.”