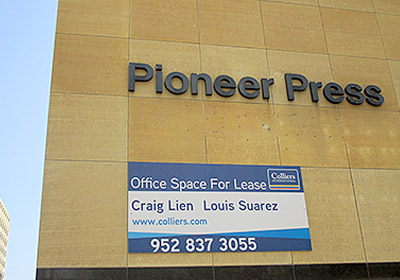 What’s Next For The Pioneer Press?

The PiPress is for sale. That could be bad news for remaining employees — or the best thing to happen to the paper in a long time.
October 02, 2014

The decade-long speculation game on the fate of the St. Paul Pioneer Press has ratcheted up — again.

The paper is currently owned by a hedge fund group, Alden Global Capital, and doing business under the corporate banner of Digital First Media. Like other hedge funds that have dallied in newspapers, Alden has never hidden the short-term nature of its investment interest in the PiPress and the 75 other papers it controls, which include the Denver Post, the San Jose Mercury News and the Los Angeles Daily News.

So after months of speculation, the company’s Sept. 12 announcement that it was officially putting the entire Digital First collection up for sale came as no great surprise. Former PiPress managing editor Ken Doctor, now an oft-quoted media analyst based in California, had been predicting as much since April. That’s when Digital First abruptly shut down its much-hyped, 100-person centralized newsroom hub in lower Manhattan known as Project Thunderdome. The hoped-for cost efficiencies of creating one hub for “news content” — mostly national features with some international news for re-distribution to 76 local papers — did not work out as planned.

That wasn't exactly news to the folks working in St. Paul. Just days before Digital First announced the possible sale, the union representing the Pioneer Press newsroom staff was so fatigued by Digital First’s ownership it took out an ad in the Star Tribune calling for new ownership.

A perilous turning point
Given the calamitous, industry-wide slump in newspaper advertising over the past decade and the Pioneer Press’ traditional weak sister role in competition with the Star Tribune, a sale of all or parts of Digital First Media could be particularly perilous for the paper and its remaining employees. Or it could be the turn that leads to its resurrection, depending on whom you ask.

These are the critical factors:

• Of Digital First’s 76 papers, the PiPress operates in the most serious competitive environment. While the paper has shed roughly 60 percent of its newsroom staff since 2001, the Star Tribune, recovering from its own disastrous private equity experience with Avista Capital Partners and now owned by billionaire Glen Taylor, has stabilized its finances and boosted its newsroom numbers back up into the 250 range, according to local Newspaper Guild executive officer Mike Buscko.

• Once potential buyers — such as large newspaper groups like the Tribune Company, which operates the Los Angeles Times and the Chicago Tribune — are struggling under their own weight and not considered to have any expansionist aspirations, certainly not for a paper in cheek-to-jowl competition.

• Even hedge fund players may have tired of the newspaper game. No one contacted for this story could imagine another hedge fund or “investment group” having interest in the PiPress.

• Some kind of local angel investor, either a group or an individual with benign intent and devoid of hopes for anything but marginal returns, is usually cited as the best option. Who that might be in the Twin Cities, no one cared to speculate, although Vance Opperman — president and CEO of Key Investment (owner of MSP Communications, among other things) — is the name always in churn. But any local investor would be acutely aware of the PiPress’ competitive disadvantage, compounded by the decline of the print industry in general. In an e-mail from London where he’s traveling for business, Opperman said he currently had no interest in buying the paper.

• Glen Taylor. Given all of the factors above, this may be, at long last, Taylor’s game to play. Besides having the personal assets to buy the PiPress, (Doctor guesstimated a $20 million sale price, a number regarded as on the high side by some), Taylor can afford to take months watching to see if anyone else comes sniffing, months that will only force Digital First Media to lower its sale expectations. (Taylor's response to requests for comment: “No comment.”)

Union leader upbeat
The most upbeat take on all of this comes, not surprisingly, from the leader of the union that represents the Pioneer Press newsroom, Bucsko, who naturally wants to do everything possible to keep his members employed. “I have no doubt the Pioneer Press is viable on its own,” he said. “It has great market penetration in Ramsey County. The Twin Cities are two distinct markets, and the paper is viable because of that fact.”

Bucsko is one of the few people outside of management who have seen the Pioneer Press’ books, though a confidentiality agreement prohibits him from disclosing the critical details. That said, he believes a local investor can see a way to continue operation. With the Star Tribune now printing the PiPress, plus significant staff reductions and the two remaining unions at the paper under new contracts, the PiPress offers something of a clean slate to new owners.

“The Pioneer Press is a lean machine right now. All the heavy lifting has been done, and it is viable. But clearly the current ownership hasn’t functioned well and someone new, preferably local, with a commitment to the market, needs to step up. We recognize that the paper is an outlier right now, within Digital First and the hedge fund, but we absolutely believe that it could be resuscitated.”

The darker view of the paper’s future come from people like Rick Edmonds, a media business analyst at the Poynter Institute in St. Petersburg.

“It is important to decide if the Twin Cities are one market or two,” he said. “The phase for Joint Operating Agreements [where local competitors merge many key production functions] seems to have passed. Where once there 28 around the country there are now only four or five. The lesson is that they really didn’t work very well, so I don’t see that as an option up there.”

Likewise, Edmonds has doubts that Taylor would buy the PiPress and fold its staff into a larger Star Tribune. “That’s something you only see now in magazines and trade publications. It could also present some legal challenges.” He adds, “Among Digital First’s 76 papers, the Pioneer Press is not an attractive property to my mind, because of its proximity to a strong competitor. The Star Tribune is in a good period right now. Which means the Pioneer Press may actually be in a worse situation than the rest of DFM’s papers, who at least have a clearer field in their home market.”

In a bygone era, a shutdown deal like that would set off anti-trust sirens. But given the newspaper industry’s weakened state and the plethora of other news and information outlets — including Minnesota Public Radio, MinnPost and a vast range of blogs and websites — it may be difficult to make a case that either readers or advertisers would be lacking for alternatives.

In any case, given the Pioneer Press' unique position within Digital First Media, any sale isn't likely to happen quickly. Mutter expects a sale timetable stretching out “months not weeks.”

Brian Lambert worked for the Pioneer Press for 15 years, leaving in 2004.