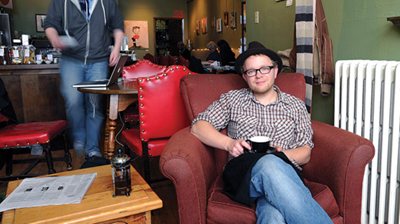 A new wave of local coffeehouses wants to give java the cachet of wine.
February 01, 2011

Try ordering a large decaf cappuccino at certain coffeehouses around the Twin Cities, and you’ll be told that you can’t have a large cappuccino—or anything decaffeinated. Ask for the dark roast of the day and you’ll be handed a menu of coffees to choose from—none of them dark roast.

But what you do order will be ground and brewed just for you, not squeezed out of a large airpot whose contents were brewed hours ago. And your espresso drink, if it includes dairy, will be finished off with an artfully swirled froth in the shape of a heart or fern leaf.

At the core of these high-end boutique coffeehouses, which number perhaps four or five locally, is a national movement known as the Third Wave, where quality and nuance are championed at every step, from the way the beans are grown to the inherent flavors being so pronounced in your cup that you wouldn’t dream of adding a shot of vanilla. It’s Starbucks 2.0, if you will.

The First Wave occurred post–World War II. Coffee proliferated in the U.S. for the first time, lauded more as a caffeinated commodity than for its flavor. Lower-quality, lower-priced robusta beans were mixed in heavily with higher-quality arabica.

In 1966, Alfred Peet opened Peet’s Coffee & Tea store in Berkeley, California, with a revolutionary idea: sell fresh, small-batch roasted coffee beans to the mainstream. In 1971, three partners from Seattle did Peet’s one further when they opened a coffeehouse called Starbucks, which initially sold Peet’s beans. If Peet’s birthed the Second Wave, Starbucks raised it and sent it to college.

In the 1980s, Starbucks expanded its offerings to include various types of “coffee drinks”; other shops soon followed. The Second Wave evolved, says Twin Cities roaster Greg Hoyt, to shops offering “20-ounce cappuccinos, sprinkles of who knows what—Fig Newtons and Oreos with whipped cream. But there’s coffee in it.”

Hoyt owns Dogwood Coffee Company, which roasts its own beans for its Calhoun Square shop; it also sells those beans wholesale to restaurants and other coffee shops. Dogwood is a local representative of the Third Wave, which is changing once again how coffee enthusiasts drink the beverage—forming a subculture around the brewed drink at a connoisseur level.

Three national bean roasters are largely credited for prompting the Third Wave: Intelligentsia (based in Chicago), Stumptown (Portland, Oregon), and Counter Culture (Durham, North Carolina). So far, Intelligentsia is the only one of these that has entered the Twin Cities market: Its beans are served in two Minneapolis shops, the Angry Catfish and Cake Eater.

Andrew Kopplin, owner of Kopplin’s Coffee in St. Paul, is the local Third Wave pioneer. Opened in 2006, Kopplin’s shop was the first to focus on single-cup brewing of small-batch roasted beans. Among the accolades his shop has won is being named one of the country’s top 10 coffeehouses by Bon AppÃ©tit magazine in 2010.

Kopplin and his Third Wave compatriots offer specialty roasts at higher price points—up to $5 for a cup of coffee—alongside their lower-priced brews. The thinking is that just as consumers expect variance in wine pricing, so they should with coffee. In 2009, commodity coffee prices hit a 13-year high of $2 a pound—close to the price of higher-quality specialty coffee. “What boutiques are trying to do is use the wine model or some sort of alternative model to break out of commodity pricing,” Kopplin says. “Because even specialty coffee is based on commodity pricing—it’s just a premium on top of it.”

Writing in Time magazine last March, James Beard Award–winning food journalist Josh Ozersky argues that Third Wavers are looking to change “the idea of coffee from a staple commodity, like corn or sugar” to a more gourmet experience.

“There are so many parallels with wine,” Hoyt says, “both from the crop cycle and the importance of weather on how the coffee’s grown, but also that expensive coffee doesn’t mean that it’s great coffee. Expensive can be overpriced coffee.”

What sets apart shops like Kopplin’s and Dogwood from neighborhood coffee shops, and what justifies their argument for higher prices, is their focus. It’s all about the bean—its quality, its flavor—and the experience of drinking something artisanally crafted. Of course, all coffeehouses aspire to serve good coffee. But they serve other purposes as well: a gathering place for friends, office space for laptop entrepreneurs, a venue for music performances or art exhibitions. Coffee isn’t always the star of the show.

While almost all Second Wave coffeehouses serve up specialty coffee, the quality varies from place to place, even among those that source their beans from the same roaster. Roasting is hard to do well—even long-established roasters can over- or under-roast from time to time. More potential perils lurk within the coffee shop itself. Sometimes the beans remain in storage too long: Two weeks after roasting, they can become stale. Or the barista can grind the beans too fine or too coarse for the brewing application, or use water that’s not at the peak temperature to bring out that roast’s best flavor.

So although Hoyt’s Calhoun Square shop offers only one size for its coffees and lattes (10 ounces) and its cappuccinos (5 ounces), there’s a reason. “It’s not going to go cold on you, but you do have the opportunity to taste a couple different temperatures as you’re drinking it,” Hoyt says. Likewise, “we offer espresso in a demitasse cup not because we’re trying to save on paper or we’re snobs about it. It’s that this is the best way to enjoy what we’ve just prepared.”

That preparation comes in many ways these days. In 2006, the Clover brewing machine revolutionized the market, offering the richness of a press-pot brew combined with a vacuum system to extract the liquid from the grounds. The machine is hailed for giving the barista precise control over water temperature, dose, and brew time—and then automating it. All for a single cup.

Starbucks bought Coffee Equipment Company, the Seattle manufacturer of the $11,000 Clover machines, in 2008 after CEO Howard Schultz tasted a Clover-made brew at CafÃ© Grumpy in New York and declared it “the best cup of brewed coffee I have ever tasted.” The strategy behind Starbucks’ purchase of Coffee Equipment Company was partially to jump on the Third Wave trend of single-cup brewing, and partially to stop other coffee shops from buying the much-hyped machines. The fact that Starbucks has put its Clovers only in select markets suggests that the machine doesn’t quite fit with the company’s overall business model.

Kopplin says, “What Starbucks gets worried about, I think, is they were the Second Wave; they were seen as high end. ‘Yeah, you can go to the diner and get your crap cup of coffee, but really fancy people go to Starbucks.’ And it was fancier. It certainly is better. But . . . the Intelligentsias, the Stumptowns convinced people that Starbucks is really mediocre.”

Kopplin himself has a Clover machine, and he’s a fan. “There’s so much automated in the Clover that the cup is more consistent,” he says. “So for me, I have a much better confidence in what your cup actually tastes like.”

The Clover isn’t the only single-cup option. Third Wave techniques also include pour-over (that’s fancified drip coffee, folks) and siphon pots, which resemble high-design science-lab equipment (or bongs, according to at least one Third Wave customer). The benefit of pour-over methods and siphon brewing is that they typically use a paper filter, so there is less sediment and oil in your cup. A skilled barista can tell you which coffees might be good matches for a certain brew method.

The Angry Catfish, which opened in January 2010, draws just 20 percent of its business from coffee sales—the other 80 percent comes from the onsite bicycle shop. But it quickly has become one of the area’s most respected shops because of the diligence of its coffee preparation. The Catfish typically has three single-origin coffees by the cup, all priced differently; the price also depends on which of the four brew styles you order. Its adherence to Third Wave principles translates into a hard-and-fast rule: no flavor shots. Another Third Wave Shop, Quixotic in St. Paul, offers just three: vanilla made from imported beans mixed with a simple syrup; Minnesota honey; and high-end chocolate.

Big locally headquartered chains are exploring the trend. Caribou introduced single-cup pour-over brewing at two of its Twin Cities stores at the end of 2009, and plans to provide it in all of its new stores. And Dunn Brothers offers single-cup coffee at its “Coffee Lab” store in St. Paul.

“If we can be a catalyst and a resource to elevating coffee in this market,” Anderson says, “that would be incredible.”

There’d be no Third Wave without Second Wave independents, who buy their beans from a wide variety of sources.

“We cup everything we can get our hands on and then pick the best ones before we even know what they are or where they come from,” says owner Peter Middlecamp, who buys his “green” beans primarily from St. Paul–based CafÃ© Imports.

Although owner Theresa Lien also serves beans from two other local roasters, her primary roaster for the past 13 years has been Peace Coffee, which is so eco-focused that it delivers via bicycle, even in winter. “Their quality is so consistent,” Lien says. “When the roaster went out of business that we had been getting our espresso from, we really wanted to keep the same flavor profile. And so we worked with Peace Coffee, and they put together a blend that fit the type of espresso that we wanted to serve.”

Owner Larz Yungbliut cites Flamenco’s top honors in the “specialty brew” and “decaf” categories at the 2008 and 2009 Calhoun Coffee Fests. “Because 80 or 90 percent of their coffee is organic, it allows me to carry only organic coffee,” Yungbliut says. “Their espresso in particular is one of the best blends I’ve had.”

“They really know coffee and offer beans from all over the world, including fair trade and organic beans,” says owner Lisa Berg, who has sourced from B&W for more than 16 years. “They are great in terms of servicing our equipment promptly and professionally.”