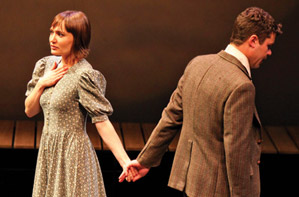 A roundup of events from throughout the month.
By Melinda Nelson
March 14, 2011

For everyone whose hair isn’t quite what it used to be, the Public Theater’s Tony-winning Broadway production is a kaleidoscopic trip back to the exuberant and turbulent ‘60s. Orpheum Theatre, Minneapolis, 612-339-7007, hennepintheatretrust.org

This intimate evening is a chance to hear old favorites, new songs from McLachlan’s Laws of Illusion, and audience questions for the artist. Orpheum Theatre, Minneapolis, 612-339-7007, hennepintheatretrust.org

Directed by the legendary Bain Boehlke and starring Cheryl Willis, this witty comedy follows a 42-year-old woman as she swaps her mundane life for a holiday in Greece. Jungle Theater, 2951 Lyndale Ave. S., Minneapolis, 612-822-7063, jungletheater.com

This award-winning adaptation of the novel tells the story of the people who came to settle the Great Plains and a lifelong friendship between narrator Jim Burden and an immigrant girl. Illusion Theater, 528 Hennepin Ave., Minneapolis, 612-339-4944, illusiontheater.org

The Age of Wordsworth