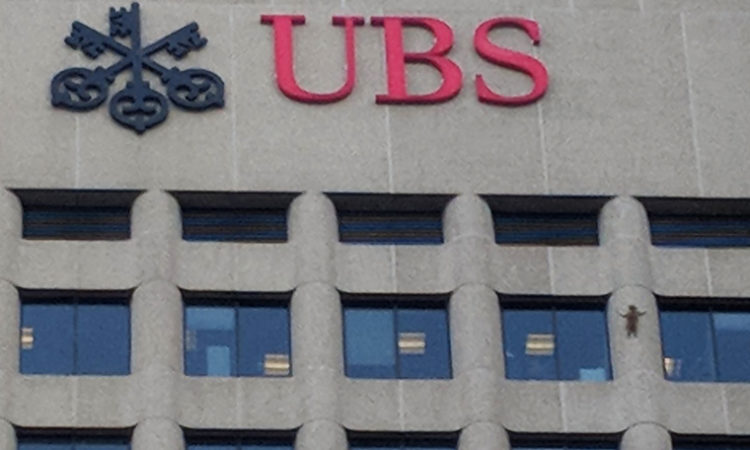 The MPR Raccoon as it nears the top of UBS Plaza on Tuesday. Photo by Tim Nelson, Twitter

What To Do When a Raccoon Scales Your Skyscraper

Today, companies around the world add a new page to the communications manual: How to respond when a raccoon scales your building, setting off a viral sensation that makes national news and has America holding its collective breath for a happy ending.

UBS remained mum on social media Tuesday as a raccoon climbed 25 floors on the exterior of UBS Plaza in downtown St. Paul, gaining national fame as it persisted in its trek. Photos of the fearless raccoon hit Twitter shortly after 10 a.m. on Tuesday and gained attention throughout the day and into the night. Minnesota Public Radio, located across the street from UBS Plaza, jumped on the story, dubbing it #MPRraccoon. That hashtag had been mentioned 137,000 times by early this morning, according to Talkwalker, a social media analytics firm.

At 6:29 a.m. today, more than three hours after animal control officials caged the raccoon atop the skyscraper, UBS tweeted: “Thanks for your concern for #mprraccoon and his adventurous climb of our office. We’re following his progress and doing all we can to ensure his return to safety.”

The response to that arguably humdrum tweet (which did not include a photo) was swift and harsh:

you had ALL DAY yesterday to leverage a free viral marketing opportunity. where is your social media team? ball dropped.

Terrible media and marketing @UBS . You missed a golden opportunity that literally climbed into your pocket. Terrible tweet. Where are the pics? No rooftop camera?

What should UBS have done?

“It could have been #UBSraccoon,” says Kelly Olson, vice president of consumer brand strategy and experiential marketing for Kohnstamm Communications in St. Paul. “Unexpected events that gain national attention are opportunities not to be wasted. You can’t afford to play possum when gifted with a raccoon.”

Yesterday’s media frenzy, largely feel good in nature, is the sort of moment most brands would pay big bucks to create. They should spend time preparing for how to respond when it actually happens, says Erin Storm, social and digital director for Lola Red PR in Minneapolis. “We have so many clients who tell us they want to go viral. Having that point person to make those executive decisions quickly is important. These days, you need to have a quick playbook for what to do when you go viral.”

Nicole Harrison of SocialNicole Digital in Minneapolis is more forgiving of UBS.

“It’s easy to criticize a brand for not jumping in and missing the viral moment, but I imagine there were some conversations as to the pros and cons of jumping in,” Harrison says. “The #MPRracoon was actually in danger of being hurt or dying. It had gone several days without food and was climbing up the side of a massive building. To join in as a brand with all the people having fun on Twitter could easily have backlashed. UBS was under pressure to help save the raccoon. I am not sure there was a way to be a part of this conversation without also risking more brand damage.”

Wildlife Management Services safely trapped the raccoon on the roof just before 3 a.m. MPR, which provided updates throughout the night, reported the famous racoon will be released at an undisclosed location.

Still, Harrison says she’s not surprised the public reacted negatively to UBS’s tweet. “The tweet was weak and so delayed. If they wanted to be part of the follow up it would have been wise to get photos and perhaps tell the story of where the raccoon was going.”

Everyone loves to rally around an underdog. Even if it’s technically a raccoon.

Being clear about your brand identity goes a long way when something unexpected happens, Olson says. “It’s okay to let people see a side of your brand that is endearing. If you’re worried about what it means for your brand identity, then you’ve already lost.”

Perhaps it isn’t too late for UBS to turn things around, and end the sensational journey of one heroic raccoon on a high note. “There’s still an opening for UBS to celebrate the raccoon’s success,” says Emily Pritchard, co-founder of The Social Lights in Minneapolis. “If UBS created and shared a video today that told a story of the raccoon’s journey to the top of the tower, it would be popular and could associate their brand with positive emotions.”

At least one graphic design firm, Aesthetic Apparatus is trying to capitalize on the moment. The local illustrator/printmaker tweeted a photo of a raccoon design on a tote bag with MPR’s logo, saying:

Hey @MPRnews and @TheCurrent I have your next pledge drive gift all designed and ready to go! #mprracoon pic.twitter.com/ptTLpFGoIn 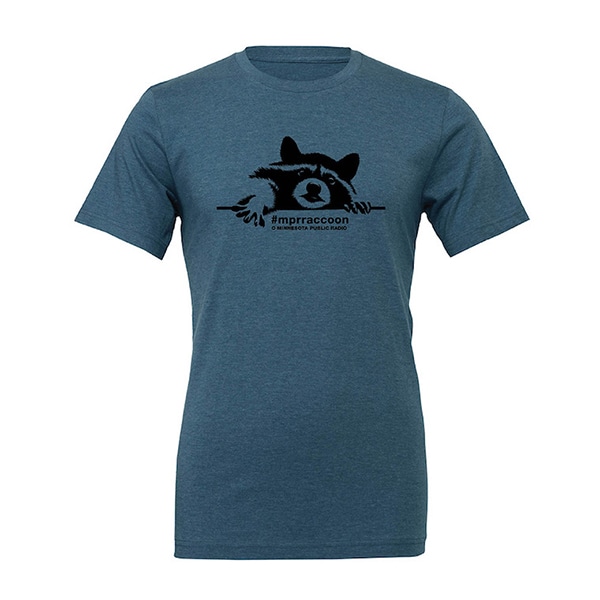 A portion of proceeds from the sale of each $25 t-shirt will go to the Wildlife Rehabilitation Center of Minnesota, supporting injured and orphaned wildlife. The tote designed by Michael Byzewiski of Aesthetic Apparatus, is being used as a membership drive incentive with a $5 per month commitment or a one-time $60 donation. Byzewiski's design is also available on a t-shirt. The blue shirt (above) was designed by MPR's Sladjana Dirakovic. 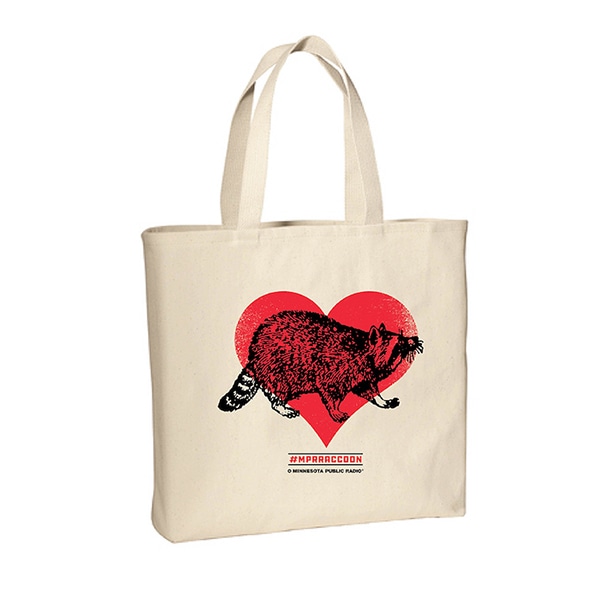