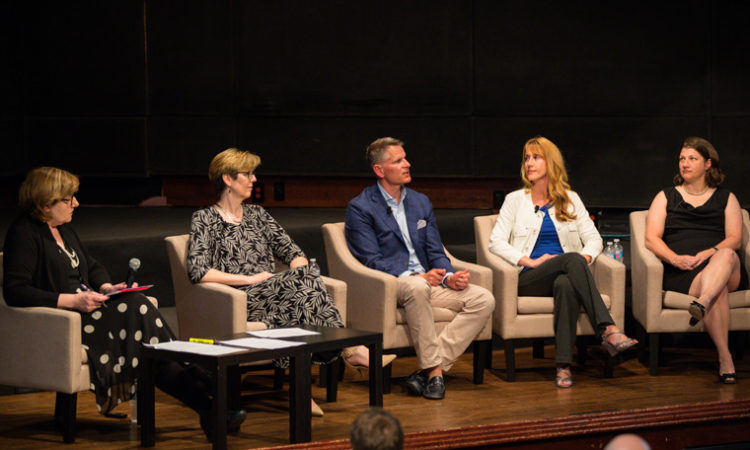 Whether it’s uncertain revenue streams or fast-changing workforce dynamics, CFOs face a host of challenges today. At TCB’s CFO talk, four financial leaders share how they’re addressing these and many other issues.
By Amanda Ostuni
June 05, 2019

To gain and share insight into the world of CFOs, Twin Cities Business hosted its annual CFO forum on June 4 at the Metropolitan Ballroom.

Joining TCB as panelists were Catherine Lenagh, vice president and CFO of Park Nicollet Health Services; Dan Mayleben, CFO of HelpSystems; Rachel Rice, vice president of finance for Padilla; and Amy Ronneberg, CFO and chief of staff for Be the Match.

From how to deal with economic uncertainty to drastically changing workforce dynamics, here are some highlights from Tuesday’s panel discussion.

Mayleben: If our software is adding value to the end user solutions, then there's higher probability you will get the ongoing revenue. So, for us, making software better, making every touch point with the customer be positive is super important. … The government's going to be the government, and as much as we like to think we can have an impact on it, we can’t always, and so therefore, we just run a very good business.

Rice: We do keep evaluating what's working, what's not, what's the right fit. The government, you can't control what's going to happen there, so, we look at what we can control, what we can't, and adjust on the fly, and it is continuous and always evolving.

Ronneberg: With Be the Match, we have a limited amount of funds that come in from the government. Historically, it was a much higher percentage, and that was something very early on, before I had even started, that the finance team knew that we needed to move away from that being our major source of revenue given the uncertainty. So today, about 36 [million dollars] of our $500 million comes from government grants, and the majority of it is from products and services.

On Mergers and Acquisitions

Mayleben: We've done about 10 deals in the last three and a half years, and one of the things that we do well is we have our functional teams participate in diligence… So, one, they understand what we're getting, and then two, there's a buy-in, that they're part of the process. So therefore, when the acquisition closes, there's no handoff. The integrations then become much easier to accomplish. And we do build consensus around the team, so we'll never do a deal unless we get buy-in from the different functional teams … because at the end of the day, they're the ones that have to make the magic happen.

Rice: With each acquisition, it is getting all that great talent. It is hard to start something from the ground up, so if you get the great people, you really come in at a higher level, it's much easier and faster… [and] we look for a cultural fit swap. The cultural fit has to be there.

On Changes in the CFO Role

Lenagh: I think the biggest change that I personally experienced is the amount of time spent on the finance side compared to the strategic side. I would say the majority of my time today is now spent on strategy and making sure that we're operationalizing that strategy, really being that partner with the CEO.

My conversations with operations are so much more frequent, so much more in depth, and the committees that we sit on for special projects always have that finance person, always have a strategist in there.

Rice: For me, it is about being forward-looking into the future. You can’t always learn from the past and what happened in the past. I think 10, 20 years ago, it was easier to do that. [But now] the markets and clients change so quickly… There's so much changing [and] so many new things happening.

On Making Cuts for Efficiency

Ronneberg: To me, being a nonprofit is just a tax status. It's still a business to run. It doesn't matter what your tax status is, you need to perform. So we have lost some people. Some people have felt like the culture has changed enough, and it's not something they want to be part of. But others I think have really embraced it, and really appreciate the fact that everyone is working just as hard as they have been this whole time, and that we're bringing the standards up. And since we've been making a lot of these adjustments in the last couple of years, we've now gone from a plateau to a 10 percent increase in growth this year.

On a Changing Workforce

Mayleben: Data suggests that … where we have a tendency to lose people would be the first two years. So, our job in the leadership team is to make sure those first two years are as good as it can be. Because as we all know, when someone leaves your organization, there's a tremendous cost to the organization, especially if you want the person to stay. So my message to my leadership team is: it’s our job to onboard people, but once they're here, it's our job to make sure that they're challenged and fulfilled so they stay.

Rice: The younger generation expects promotions much quicker than previous generations have, and by much quicker, I mean in some cases it seems almost immediately. So Padilla in the past has always had two times annual cycles of promotions, and that had to be changed to three times annually. So tenure before that was on the decline, people were leaving. When we switched to the three times annually, there was a drastic decrease in that turnover. So, you have to go with what's happening.

Ronneberg: We're a cell therapy company, [but] this is a med device city. There's not a lot of cell therapy expertise here. So we find that we either have to make higher offers than maybe what the job market is saying, to be able to get people to move to Minnesota. What we started doing is opening up satellite offices so that we can get the talent where they are.

The other piece for us is we have a huge gap right now in patients who go to transplant who are Caucasian versus those who are African American… We're having to also look at those satellite offices because the pool of those individuals in Minnesota is not as large as some other states.

On Doing Business in the Twin Cities

Lenagh: I think it's great. I think the Twin Cities are really a well-oiled machine from a healthcare standpoint. So that's good for us as a population, and it means that as a business we need to find a way to differentiate ourselves.