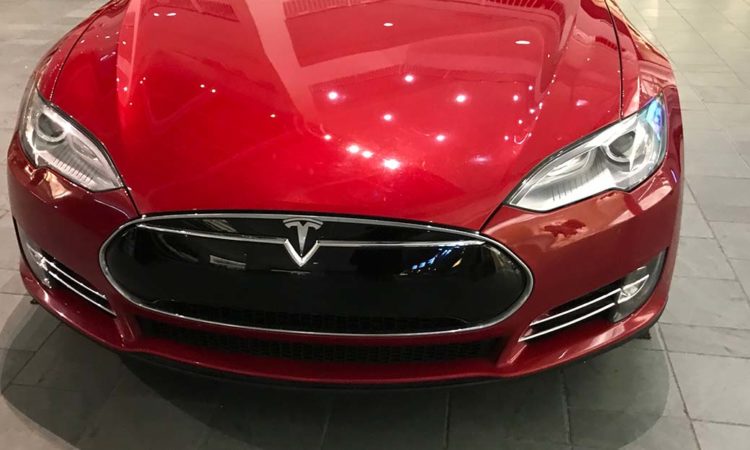 A Tesla on display at the Mall of America. Jeff Bukowski / Shutterstock.com

Talon Metals Corp. wants to build an underground mine that would operate for nine years and primarily extract nickel, but also some copper, cobalt, platinum group metals and iron.
By Walker Orenstein
January 20, 2022

One of the selling points for several proposed copper and nickel mines in Minnesota has been that the metal can help power green technology like solar panels, electric vehicles and windmills.

But that possibility has always been somewhat hypothetical, or at least hard to quantify for the controversial projects.

PolyMet Mining says metal from its proposed mine near Hoyt Lakes would be a commodity sold on a world market. But while there is high demand for things like EV batteries, there is no guarantee how much, if any, of the product would be used for domestic green technology.

Another proposed mine, Twin Metals Minnesota, said in August it was looking into the possibility of supplying an electric vehicle battery manufacturer with its project near Ely. The company also hopes to keep sales generally to the U.S. and allied countries. Yet Twin metals can’t ensure either thing will happen.

“We haven’t signed any contracts; we’re obviously very early in the process about where our concentrate and our metals would go,” said Julie Padilla, chief regulatory officer at Twin Metals in August.

Last week, however, a mining company with a project in much earlier stages of development, Talon Metals Corp., announced it already has an agreement to supply the electric car giant Tesla with nickel for batteries.

Though it’s still too early to tell if the tentative deal will translate into broader political support, environmental groups and Native tribes have so far been skeptical of, and in some cases outright opposed to, what’s known as the Tamarack project.

What is the Tamarack mine?

Talon, which is still in the early stages of developing its proposal, currently plans to build an underground mine roughly 36 miles west of Cloquet, near the small Aitkin County town of Tamarack. The mine would operate for nine years and primarily extract nickel, but also some copper, cobalt, platinum group metals and iron.

The company, which has Canadian ties but is headquartered in the British Virgin Islands, is still working to apply for Minnesota mining permits and environmental review. Talon could submit a mine plan to state regulators within a year, but plans so far described by the company are preliminary. The company owns a majority of what it calls the Tamarack Nickel Project in a joint venture with the British and Australian mining giant Rio Tinto.

Talon spokesman and head of climate strategy Todd Malan said the mine could be somewhat smaller than currently planned, depending on what Tesla needs, but the company also has detailed plans for possible later expansion into a “mining district.”

“We’re going to be able to shape the mine to fit what Tesla needs, so it may be smaller and that’s one way to also reduce the burden in permitting is propose a smaller mine,” Malan said.

Malan said the company hopes to hire 450 people and is collaborating with the United Steelworkers union to build a workforce. That’s a smaller workforce than Twin Metals has promised, but a larger one than PolyMet has planned.

The mineral deposit is on 31,000 acres of state and private land in the watershed of the Mississippi River. Talon says it plans to bury some of the the tailings — the waste rock and material left over after the targeted metal is extracted— back underground mixed with cement while storing the remaining tailings in a “dry stack” pile.

State regulators have said that method — which involves squeezing moisture from tailings and compacting them into a large mound — has pollution risks in Minnesota’s water-rich and often cold environment. But the storage system has also generally drawn praise from some environmental groups because it eliminates the need for a more traditional tailings pond, and the possibility of the pond collapsing and unleashing a flood of toxic waste and water.

Talon also hopes to use an all-electric fleet of mining vehicles, as well as capture and store some carbon emissions underground. Malan also said the company would treat water from the mine to prevent toxic byproducts from escaping elsewhere.

Even before its deal with Tesla, Talon marketed itself as a supplier of critical materials for EV batteries. The company says it has a high-grade deposit and tried to draw interest from Tesla by billing itself as a more environmentally sensitive mine.

Some environmentalists were skeptical that metal from Tamarack would actually end up going to electric car production, but Talon’s project became the first Minnesota mine proposal to have a formal tie to an EV company.

Talon isn’t the only company to strike a deal with Tesla. The company also has an agreement to source nickel from a mine in the French territory of New Caledonia in the South Pacific.

Tesla has said working directly with mines, rather than buying metals from a middleman, can help it address environmental concerns from metals production. “Responsible sourcing of battery materials has long been a focus for Tesla, and this project has the promise to accelerate the production of sustainable energy products in North America,” said Drew Baglino, senior vice president of powertrain and energy engineering at Tesla, in a news release about the deal.

Under the agreement, Tesla committed to buy 75,000 metric tons of nickel concentrate over six years from Talon, and the EV company also has “preferential right” to negotiate a deal to buy more. That represents only a portion of the metal Talon hopes to mine, and the agreement depends on a few factors. Namely, the parties can go their separate ways if Talon isn’t producing metals by 2026 (though the deal carries an option to extend that deadline).

That’s a fast timeline for mines in Minnesota. PolyMet has been in the environmental review and permitting process for 17 years and is facing lawsuits that could still set back the project.

Talon hopes a more explicit connection to EV production will help reduce opposition from environmental groups, Malan said. The Tesla deal and Talon’s other commitments — to dry stack tailings, using an underground mine and other steps intended to limit pollution and land disturbance — are “key to public acceptance,” he said. Talon’s website markets “green nickel” for the U.S. supply chain.

Malan noted Gov. Tim Walz and other high-profile state officials have promoted electric cars as an important way to address climate change, as the transportation sector is the largest source of fossil fuel emissions in Minnesota.

But elected DFLers have been split over PolyMet and Twin Metals. Walz has supported PolyMet but has been more skeptical of Twin Metals. President Joe Biden’s administration has supported EVs, but it has also taken steps to ban mining for 20 years in the BWCAW watershed, a move that could block the Twin Metals project. Minnesota Republicans, and trades unions have largely supported copper-nickel mining in the state.

Walz spokeswoman Claire Lancaster said in a written statement Tuesday that the governor “knows that transitioning to clean cars is important for combating climate change and moving toward a more sustainable future.”

“Talon has not yet submitted a proposal for the state to review,” she said. “As with any project that may go through the state permitting process, the Governor’s Administration will follow the law, follow the science, and follow the designated process.”

Still, the Tesla announcement has not done much, if anything, to assuage concerns raised by local environmental advocates or the Mille Lacs Band of Ojibwe.

Kelly Applegate, commissioner of natural resources for the Mille Lacs Band, said there are Band members 1.3 miles away from the mining site. Applegate said the tribe is worried the operation could contaminate personal wells.

Copper and nickel mines pose environmental risks that Minnesota’s traditional taconite mines do not. When the rock containing the metal is exposed to air and water, it can create an acidic byproduct and leach heavy metals into water — known as acid mine drainage.

While Talon contends it can meet state environmental standards, Applegate said mines for metals like copper, nickel and cobalt have a bad pollution track record.

To the south is Rice Lake, which Applegate said is one of the largest rice beds in the area and which has a national wildlife refuge. Impact to those resources, he said, would be “unacceptable,” and preventing pollution in the area is an environmental justice issue.

Applegate also said the people who ultimately benefit from the mine will be the wealthy, who can afford to drive a Tesla. “The Band supports green energy but not at the expense of our environment or natural resources or our people,” Applegate said. “Our greatest natural resource is our people.”

Jean Skinaway-Lawrence, a leader in a campaign to get federal recognition for the historic Sandy Lake Band of Mississippi Chippewa (the Sandy Lake community is currently part of the Mille Lacs Band), said dust from the dry stack or mining process could blow into nearby land and waters. She and others have also noted there are other minerals or materials that can be used to make batteries such as hemp, lithium and iron, though EV battery manufacturers are still hunting for nickel and cobalt around the globe.

Malan said Talon has been providing data from their environmental studies to tribes and taking input from tribal scientists, and said the company views Minnesota tribes as “sovereign governments with both a duty and authority to protect the natural environment in the region.”

Yet Paula Maccabee, attorney for the environmental nonprofit WaterLegacy, which has opposed PolyMet, said Talon hasn’t given enough information yet on the size, scope and details of the mine and its potential hydrology for people to truly evaluate the project, and said the Tesla deal at this point amounts to a “press release.”

She said the high-grade deposit means more potential for acid mine drainage, and noted Talon could expand its project later on to make the area a large mining district. And Maccabee said she doesn’t trust state mining regulators to adequately protect water.

Scott Beauchamp, policy director at the Friends of the Boundary Waters Wilderness, said his nonprofit is still evaluating the specifics of the Tamarack project. “However, the long history of pollution from this type of mining makes any proposal in the water-rich environment of northern Minnesota very concerning,” he said.