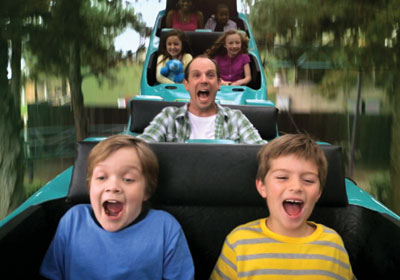 Valleyfair Reaches Out To Dads

>One of the new features at Valleyfair is Dinosaurs Alive! A new spot featuring a trip to the park with Dad intends to show that fathers aren’t always Jurassically uncool. Moms are usually the target of adult-oriented theme park advertising, according to Kelley Semmelroth, chief marketing officer at Sandusky, Ohio-based Cedar Fair Entertainment Company, the parent company of Valleyfair. (The spot was created by Cramer Krasselt in Chicago.)

But research at the end of last season indicated that “Dad can be a big influencer—he’s still a thrill-seeker.” Semmelroth says research shows “What [dads] love about Valleyfair is that it was something they are participating in with their kids versus watching a soccer game and being on the sideline.”

Moms remain a target, but, says Semmelroth, “we wanted Dad to be the hero for a change.”

>The spot “Family Traits” features a dad with two sons at the popular amusement park. Observing that the father and sons “don’t dress alike” and that Dad “eats weird stuff,” the kids question whether they’re even related to him. Cut to a shot of Dad and boys on a roller coaster, with identical screams. “Yep, he’s our dad,” the kids confirm.

There’s another unspoken point to the spot: the rise of single dads, or dads with joint custody who may be looking for a fun weekend event when they have their kids. And there’s an unspoken economic aspect, says Semmelroth, who noted the roller coaster of the shaky economy, as well as “time poverty,” as factors that have resulted in increased attendance.

>Semmelroth says Valleyfair spent around $2 million in media buys. Most is invested in TV and radio, which is used for promotion and frequency, as well as outdoor and online efforts. Very little print is used, since kids are part of the target.

The spot ends with a “Thrills Connect” tagline. Given the economic, chronological, and, in some cases, family challenges, connecting may be the thrill most prized by parents.