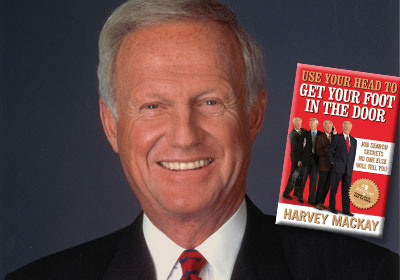 Harvey Mackay has sold more than 10 million books worldwide. Now he's out with a new one, Use Your Head to Get Your Foot in the Door: Job Search Secrets No One Else Will Tell You.
March 01, 2010

In 1972, University of Minnesota football head coach Cal Stoll asked me to help recruit a promising young quarterback from Parkside High School in Jackson, Michigan. The name of this prize package: Tony Dungy.

Tony was everything. He starred in three sports—baseball, football, and basketball. In his early teen years, he even was recognized by Sports Illustrated in its “Faces in the Crowd” section. He was a student body president at 14, and was loved and admired by fellow students.

Why was I asked to help land this dream addition to the school and the athletic program? Perhaps because of my perspective as a former varsity athlete and then president of the University of Minnesota Letterwinners Club. From the day I was born, I have always been mesmerized by all sports— from Ping-Pong to football. Then there’s my dedication to my alma mater. Were I to accidentally cut myself, I’m sure I’d bleed our school colors of maroon and gold. Later, I became the national president of the alumni association. (The U of M alumni contingent is a legion of formidable size. Today it has more than 60,000 dues-paying members.)

So, off I flew to Jackson for the first of my two visits to the Dungy home. (In those days, an alumnus, or any interested party for that matter, could make unlimited recruiting visits to a prospect’s home. Today, you can’t have any contact with a prospect whatsoever.)

When I arrived at the Dungy home, I was well prepared. I had done my homework and was prepared to win. As I teach our sales force and always practice myself: There is no such thing as a cold call, and this was as warm a call as you could get. I had CAT-scanned and done an MRI on Tony, as well as his wonderful mother, CleoMae, an English teacher, and his highly respected father, Wilbur, a professor of physiology. I knew that education was the first priority in this deep-valued household.

The Dungys welcomed me with open arms. They were great listeners and equally well organized, asking questions that were both substantive and keenly perceptive. As highly touted as Tony was as an athlete, education was foremost in the family’s mind, not football. The philosophy I maintained: The school does not make the kid, the kid makes the school. In other words, Minnesota could provide everything Tony wished for and dreamed of both on and off the field.

All the schools Tony was considering, I have to admit, had the same assets and advantages as the U of M. Ultimately, it all comes down to trust and chemistry. He was comfortable with Coach Stoll and trusted that Minnesota would deliver on important extras such as summer jobs and staying in touch with his parents to keep them updated on his progress.

When I returned from Jackson, my report on my first face-to-face with Tony consisted of an eight-point description: outstanding student, happy, healthy, challenged, committed, focused, goal oriented, and absolutely loves football.

Tony chose Minnesota over a major Big Ten Conference school and started playing for the Gophers at age 17. He played in eight games as a freshman, and before his career ended he sparkled as an outstanding quarterback who set a number of school passing records. Following both the 1975 and 1976 seasons, he was second team All–Big Ten quarterback. Those same years he was also All–Big Ten academic.

Of course, what Tony achieved on his own was foremost, though many people played key roles in supporting his success, as Tony would be the first to admit. Nonetheless, on countless occasions during Tony’s glorious four years I would refer to him among friends as a “son.” I was so proud to be in constant touch with him and to watch him grow. Today, I only regret I didn’t save CleoMae Dungy’s letters to me during Tony’s four years. They were inspired writings loaded with lifetime philosophies and goals she had prayed for along with her husband, Wilbur—goals that Tony would embrace and that enhance his belief system as a motivational leader and humanitarian yet today.

Tony graduated after the customary four years. A move to the pros postgraduation seemed a certainty. In 1977, the NFL had 12 rounds of drafting, and there were 28 teams in the league. Tony was realistic enough to know that he wouldn’t be chosen for a quarterback slot, but such an intelligent, accomplished, and diligent athlete was sure to make it on someone’s roster—in all probability, as a defensive back.

In the end, 333 players were selected in the 1977 draft. Tony Dungy wasn’t one of them. The results might have been devastating for Tony. It was beyond comprehension that all the teams passed.

Time for a midcourse correction!

Time for a summit meeting at the number-one restaurant in Minneapolis, Charlie’s CafÃ© Exceptionale. The luncheon meeting was a long one—two and a half hours. I reassured Tony this was not the end of the world. He would be a surefire success in the business community. “Don’t lose confidence,” I reminded him. Of course, the silver lining was the lull between the end of the college football season and the NFL draft. It gave Tony a window of opportunity and he was smart enough to dig his well before he was thirsty. While Tony had one eye on the big prize of being scooped up by an NFL team, he also had some job interviews in corporate America, just in case the draft didn’t work out.

On his own, with no help from me, Tony landed a dream job at General Mills, headquartered in Minneapolis. I was ecstatic and asked him when he was going to start.

That’s when Tony dropped the atomic bomb on me.

“Harvey,” he said, “this is the reason I wanted to meet with you and ask your advice on a real dilemma I have. You remember Tom Moore, our offensive coordinator?”

“Well,” Tony went on, “he is now with the Pittsburgh Steelers’ staff. Tom Moore not only assured me a tryout as a defensive back, he’s quite confident I’ll make the squad. I’m really in a quandary and not sure exactly which way to go.”

This was a piece-of-cake decision. I shifted into high gear and spent the next hour haranguing Tony on the advantages of General Mills. Before the lunch, having gotten a whiff of the probable topic, I had even contacted a high-level executive to see what he thought of Tony. The General Mills exec got back to me. I will never ever forget his very words: “Harvey, we are so high on Tony that we expect him to be one of the top minority executives here at General Mills within five to 10 years.”

Of course, I told this to Tony, but it didn’t begin to faze him in the slightest. His heart was set on making the Pittsburgh Steelers, no matter the cost. And the Pittsburgh Steelers were smart enough to sign Tony as a free agent defensive back. After just one season, Steelers head coach Chuck Noll recruited him as a defensive assistant coach, working for NFL legend Sid Gillman.

Over the next several years, he held defensive coaching assignments with the Kansas City Chiefs and the Minnesota Vikings, turning the Vikings’ defensive unit into the finest in the NFL.

Tony’s drive to become an NFL head coach was unstoppable. In 1996, he was named head coach of the Tampa Bay Buccaneers—a team that was a laughingstock when he signed on. At Tampa Bay, his discipline and strategic sense built a team that regularly appeared in postseason playoffs.

Repaying the team’s extraordinary advances under his watch, Tony was fired in January 2002! Tony has learned to take such setbacks philosophically. In his book, Quiet Strength, he says, “I am a firm believer that the Lord sometimes has to short-circuit even our best plans for our benefit.” I hope all of you jobless readers who feel the world is unjust are digesting this story carefully because two extraordinary things happened next.

The first was that the Buccaneers won the 2003 Super Bowl. They did so because of the outstanding organization Tony left in place before he was booted out for being too conservative with his offense. NFL teams aren’t built overnight. Increasingly, managers in every profession and industry are being evaluated on how strongly their organizations continue to perform after they have left their jobs.

The second took place on February 4, 2007, when Tony was head coach of the Indianapolis Colts, a position he had assumed in 2002. Tony became the first African American head coach to win the Super Bowl as his team downed the Chicago Bears.

Tony retired from pro football early in 2009. Think about it: No one wanted him badly enough to draft him for the pros. No NFL team would accept him as a quarterback. And he leaves the game with a new record for consecutive playoff appearances by a head coach and the unmatched achievement of a Super Bowl victory!

I’ve had an opportunity to be in touch with many student athletes over the years, but couldn’t be prouder of the inscription that Tony wrote to me in his first best-selling book back in 2007: “Harvey, thank you for all your help and support over the years. This would never have happened without you.”

Oh, by the way, there’s one more event in this saga I must share with you.

On October 9, 2000, Monday Night Football matched our Vikings with Tony’s Bucs in a pivotal game in Tampa Bay. A lot of marbles were on the line, and the air was electrified. I follow every Viking pass and punt and have been quite close to all of the previous owners, including then-owner Red McCombs. Red had graciously invited me to watch the contest in the visiting owner’s suite with his family, and I accepted.

Before the game, I hustled down to the sidelines to greet Tony for a quick hello. There he stood—hands folded, face expressionless, with the calm certainty of a Greek god. Tony looked at me, twisted his neck and circled the whole sell-out stadium crowd of 68,857 and said: “Harvey, sure glad I didn’t listen to you!”

There are some valuable lessons here:

• Don’t ever give up in the aftermath of a setback. In fact, look hard for the ways in which rejection can make you more determined and effective in what you are determined to achieve.

• Accept detours if they contribute to your ultimate goal. The fact that Tony couldn’t break down the barriers to being an NFL quarterback didn’t derail him from becoming an outstanding NFL head coach. He converted his experience as a defensive player and a defensive coach to hone a foundation for his head coaching skills. It’s an attitude Tony famously expressed when he said, “We are learning how to win another way.”

• Most important of all, follow your heart. Tony could have safely opted for an executive career. He would surely have succeeded at it. But he persevered and chose his own dream—not just excelling, but shattering the yardstick and becoming the new leadership standard for his profession.

Mackay’s Moral: March to your own heartbeat, and your odds of commanding life’s playing field soar.