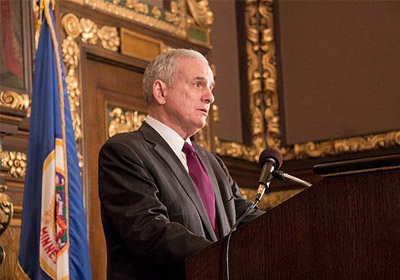 It appears that Gov. Mark Dayton is set to eliminate the gift tax, which he signed into law last spring.
March 15, 2014

Governor Mark Dayton, who used the theme “tax the rich’’ to win office, is expected to announce Wednesday a few ideas that sound like “untax the rich.’’

In his supplemental budget, the governor is expected to make significant changes in two taxes, a gift tax and an estate tax,  that are unpopular with the state’s wealthiest.

It appears that the governor is set to eliminate the gift tax, which he signed into law last spring, and align the state’s estate tax with federal estate tax law.

Of course, Dayton’s not alone in pushing tax cuts. House DFLers are racing to pass a broad-based bill that would cut personal and business taxes by $500 million. Senate DFLers, moving at a more modest pace, also are pushing cuts.

Republicans claim to be astonished as they see their DFL counterparts whack, hammer and cut taxes.

“For Democrats to race to the table with tax cuts is not just amazing, it’s a good day for Minnesota,’’ said Representative Greg Davids, R-Preston. “I have to say they’re not going far enough, but at least it’s a start.’’

One reason for the DFL’s tax-cut fever are the string of favorable economic forecasts showing the state with a fat cash surplus even in outlying years.

Republicans  suspect there may be another reason for the DFLers to be in such a tax-cutting mood: It’s an election year.

But DFLers insist it’s not the specter of November elections that’s creating the flood of cuts.

They use words such as “balance’’ to describe the various cuts that Dayton hopes to have on his desk by the middle of this month.

“At the end of this session, we are going to be able to say we’ve done things in a balanced way,’’ said Representative Tom Anzelc, DFL-Balsam Township.

Anzelc ticked off the “balanced’’ agenda: a hike in the minimum wage, cuts to taxes for those in the middle class, elimination of the business-to-business taxes that the DFL Senate demanded last session, a sizeable bonding bill and “some strategic spending for things like propane and school lunches.’’

Still, the push by Dayton to eliminate the gift tax and lessen the burden of the estate tax stand out. These changes will benefit the few, the wealthy.

Hmmm. Imagine a DFL bumper sticker that reads: Empathy for the Rich.

Look out the window and you may see other reasons that people of even modest means would leave the state.

But DFLers seem to accept Thompson’s premise.  Those taxes leave Minnesota in the position of being an “outlier’’ state, some DFLers note.

The gift tax, which was pushed into last year’s omnibus tax package by the DFL-led Senate, isn’t exactly a problem for middle-class Minnesotans. Nonetheless, it’s a tax not present in most states.

It works like this: You are allowed to give $14,000 to each of your children, their spouses and children up to $14,000 each year, with a lifetime cap of $1 million. (That cap is $2 million for you and your spouse.) After that cap is hit, there’s a tax of 10 percent on the amount that's more than $1 million (or $2 million including a spouse).

Put it this way. Say you’ve got two grown kids, who are married. Each of the couples has two kids. That means you could give them $112,000 this year without any tax consequence.

Let’s repeat: This is not a problem for most. Yet,  it is expected Dayton will ask the Legislature to eliminate that tax.

Like the gift tax, the estate tax doesn’t cause most Minnesotans to lose sleep at night.

Currently, there’s a tax on the amount that's more than $1 million in a Minnesota estate. Dayton is expected to seek conformity with the federal estate tax law. The feds don’t tax on an estate until it reaches more than $5.25 million.

It should be noted there are substantial exemptions and exclusions to the estate tax for some. For example, small farmers in Minnesota are not hit by the $1 million tax, the theory being that many farmers are “land rich and cash poor.’’

In 2011, the Legislature passed a law that allowed farmers and some small businesses to leave estates with a value of $5 million, before the estate tax kicked in.

“If you’re a farmer in Fillmore County with 100 acres, you are cash poor and land rich,’’ said Davids of the special arrangement for farmers. “The only way some could pay the estate tax was to sell some of the land.’’

Until these two Dayton proposals go through the legislative grind, it’s hard to say how much the changes will cost the state. But it’s expected significant changes in the two taxes could cost the state about $100 million annually, beginning in 2015.

Not surprisingly, Republicans are saying that the expected Dayton proposals and the push to eliminate the business-to-business and warehouse taxes that came last session are proof that the GOP was right all along.

Dayton, he believes, is proposing the changes because it’s an election year.

“The governor realizes that some serious damage has been done to himself and the state’s ability to compete,’’ Thompson said.

DFLers counter by saying that it was because they’ve put the state’s financial house in order and re-invested in things (such as education) that make Minnesota outperform the nation. Those dynamics, they say, are leading to the surpluses that are making tax cuts possible.

DFLers also bristle at the slogan the GOP is now tossing around whenever two or more are gathered together.

“Give it back’’ is the Republican mantra for how to deal with the surplus. They claim they want to give it “all” back.

In fact, however, DFLers point out that their GOP colleagues have been quick to support spending $20 million on a depleted propane fund. Most in the GOP also want a 5 percent increase for funding the state’s nursing homes, money that would end up in improving the wages of nursing home workers. That would cost around $86 million.

Still,  it’s been years since there’s been so many DFLers talking tax cuts.

Davids points to something else that he believes is unique this year: a Star Tribune editorial with the headline “Move quickly to cut Minnesota taxes.’’  Like most Republicans, Davids has long considered the Star Tribune to be far to the left politically.

Davids, a hard-nosed conservative with a sense of humor, was holding up the editorial in his office Tuesday.

“I’m having this enlarged,’’ he said. “It’s suitable for framing. Never in my life did I think I’d see a Star Tribune editorial calling for tax cuts.’’