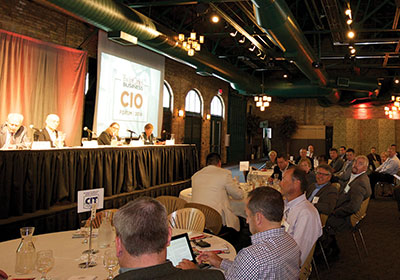 CIOs take on the latest issues in an ever-changing field.
By Liz Fedor
October 01, 2014

Carolyn Parnell was a public employee in 2011 when she accepted Gov. Mark Dayton’s offer to overhaul Minnesota’s information technology services, but she acknowledges she was surprised by the disjointed system she discovered.

“There were 80 to 90 different boards and agencies all doing IT in whatever way they wanted,” she recalls. “It was pretty chaotic. The right hand did not know what the left hand was doing. People could make decisions independently, and there was a lot of redundancy.” Parnell, who serves as the MN.IT Services commissioner, says reforms and consolidation of Minnesota’s information technology administration and services have saved taxpayers $27.4 million as of mid-2014.

Although Parnell works in government, she has the same worries as chief information officers in the business and nonprofit sectors who are trying to make intelligent IT investments, ensure the security of their data and deploy IT resources to serve customers.

Parnell was among four experts who tackled IT challenges at a Twin Cities Business CIO Forum in late July at the Nicollet Island Pavilion in Minneapolis.

While many retailers have been subjected to attacks by hackers seeking customer credit card numbers, Sunquist says health care providers also are trying to fortify themselves against digital theft.

“The hottest thing right now is stealing medical record numbers and medical identities,” she says. In the criminal marketplace, people want to buy medical identities because they could pretend to be somebody else and get thousands of dollars worth of health care services.

She also stresses the overarching concern to keep patient medical records private. When there is a breach of unsecured protected health information, federal law requires organizations to report it to the U.S. Department of Health and Human Services. In the past four years, she says that HHS has received reports of hundreds of breaches. “If you haven’t had a breach, you’re lucky,” Sunquist says. “It’s just a matter of when, because it’s pretty inevitable something is going to happen at some point in your career.”

When it comes to patient health-care data, Abramson harkens back to a favorite adage of President Ronald Reagan, applying the “trust, but verify” approach to how health-care employees handle data.

“We had a data loss protection software that actually scans outbound emails to see if there are certain kinds of data in it,” Abramson says. “We found all kinds of violations, and most of them were actually innocent, or they were related to the fact that someone was helping a research project. But you don’t send unencrypted data about patients, even if it’s a research project, out into the Internet.”

The data security challenges in health care institutions are complex.

“In a typical hospital of large size like we run, there are five to 10 times more biomedical devices than there are laptops or desktop computers,” Abramson says. “As that technology advances, they are all going to have some kind of chips in them that are capable of processing data.” Tremendous amounts of data will be produced for each individual patient. One of his concerns is that no “mature security model” has been developed to broadly safeguard biomedical devices. He forecasts there will be quick changes on how this information is managed.

In state government, Parnell notes that there are huge security challenges, “partially because of some of the legacy systems that you can’t even retrofit.” In the next budget cycle, Parnell says she plans to seek more funding to improve security of the state’s IT systems.

Target’s widely publicized data breach has increased state legislators’ awareness about data security, she says. “People all of a sudden kind of get it,” Parnell says. “If [legislators] tell me I’m just trying to scare them, I’m going to say, ‘Absolutely, I’m scaring you with the truth.’ ”

Information technology is a critical element in the success of Proto Labs, a global company headquartered in Minnesota, with manufacturing facilities in Plymouth and Rosemount.

“We specialize in making parts for people, and we do it very fast,” Bodor says. “We serve product developers, engineers who are trying to make products to bring to market. We allow them to do that through a broad range of manufacturing processes in as little as one day, and we do that through a great deal of automation and IT enablement.” 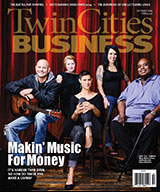 MN Students Getting Attention After Successful Suits Against Districts
The Degree-To-Paycheck Decision
The Best Local Wineries To Entertain Clients
Could Medtronic's Latest Monitoring Implant Be A Lifestyle Option?

The range of Proto Labs offerings includes injection molding, CNC (computer numerical control) machining, metal molding and additive manufacturing. “One of our challenges is building the infrastructure, the software, the IT systems to enable that kind of breadth, while continuing to grow as a business,” Bodor says.

For example, he says, a customer may need 18 different parts for the assembly of one product. All of the parts need to be molded, and the customer wants a quick turnaround. “That’s a very difficult challenge for most manufacturers to meet,” Bodor says.

In terms of its business process, he explains: “A customer sends us a CAD [computer-aided design] file, and we send them a quote. If they choose to order, we ship them parts as soon as the next day.”

Before parts are manufactured, Proto Labs shows the customer a 3-D rendering of the finished part, so the customer can assess whether any modifications are needed based on how the part was designed.

In recent years, Proto Labs has been increasing its revenue by at least 25 percent annually. “A big challenge for us has been thinking about how we set up the infrastructure and the architecture, both on the software side and the hardware side, to support those volumes,” Bodor says. “It feels like we have to be thinking several generations ahead. Incremental improvements are not enough.”

For the second quarter of this year, total revenue for Proto Labs jumped by 33 percent to $52.9 million.

As the company’s customer base has grown, Bodor says he’s also focused on user experiences. “A lot of our go-to market and our customer experience is really delivered online,” he says, emphasizing the need for a “consistent, dependable and unified user experience” across multiple digital platforms.

After consolidating IT operations in Minnesota state government, Parnell says, “for the first time we could measure our IT spend in the state and compare it with both the public sector and the private sector.” She stresses that she’s as cognizant of assessing a return on investment as anybody in the for-profit world.

“We have to really account for all of our IT spend,” she says. “We have a service level agreement with every single agency. They know exactly what they are getting, how much it costs and who is delivering it. One of the things I told everyone in light of IT consolidation was that we are not going to do less IT, but we were going to do IT smarter.”

The number of state data centers has been reduced, which is freeing up some money from real estate costs. “We have been pretty successful in making the case for investment in technology because we have been so underfunded,” she says. “We have so many legacy systems that just are going to fall apart unless we replace them.”

In his large health care organization, Abramson says he thinks the wise approach is to ease into using new technology shortly after it’s been invented. He favors pilot projects with new technology rather than making huge financial investments in the early months after new products go on the market.

“There is a lag before an organization can really use it effectively,” Abramson explains. “We resist putting big money into [new technology] until we feel that there is a sense that our user community, our business partners, really know how to use it and use it in a cost-effective way.”

When he is assessing new technology, Bodor says, he ties it back to the profit-and-loss statement and determines whether the investment would increase the company’s capabilities and expand revenue growth.

In the Twin Cities and other metropolitan areas, Sunquist says there are salary bidding wars to get and keep lead security officers within companies. “If you find really good people, somebody else wants them,” she says. In many cases, “they will be snapped away for a lot of money.”

While many organizations simply have to pay more to retain lead security professionals, Sunquist says, these pivotal jobs offer the opportunity for businesses and nonprofits to develop and promote talent from within organizations.

“I was blown away by the skills that state government IT employees have,” Parnell says. “When I’m out talking to the public, I am very clear about saying I truly think that every IT person should have a stint in public service. It is something so valuable, and to believe in the mission of what you are doing is a real attractive factor.”

State government is addressing a “stunning retirement factor,” she says, noting that she signed 10 retirement certificates the day before the CIO Forum.

Finding the IT employees she needs has been a challenge. “But I’ve actually been quite pleased with the workforce that we’ve been able to attract over the last couple of years,” Parnell says. “People come from the private sector. They move around within state government. Some of them have gone out to the private sector and come back to the public sector. The other message I try to give people is that we are not all about old technology. We really do have some of the latest and greatest.”

Some Minnesota-based employers recently have outsourced some IT jobs, while other firms have decided to bring the jobs back home. “We are all looking for the same people at the same time,” Abramson says. In particular, he notes, the people who are in greatest demand have expertise in mobile device development, security and big-data analytics.

“We all seem to be on that same wave at the same time,” he says. “That makes it great if you just got out of school with an advanced degree in data analytics, but maybe not great for those who are trying to rapidly retrain.” 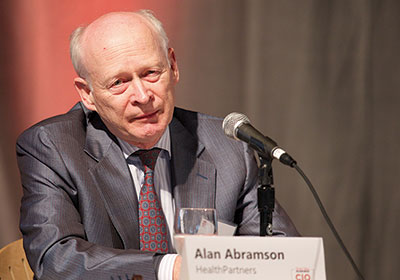 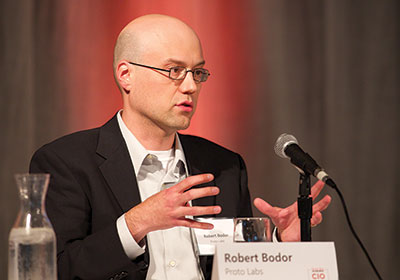 Bodor has worked for Proto Labs for nearly two years; he was initially hired as the director of business development. He previously worked at Honeywell, including as the safety software solutions leader for the Honeywell Life Safety Division. Earlier in his career, he was an engagement manager for McKinsey & Co. He holds bachelor’s, master’s and doctoral degrees from the University of Minnesota-Twin Cities in engineering and computer science. 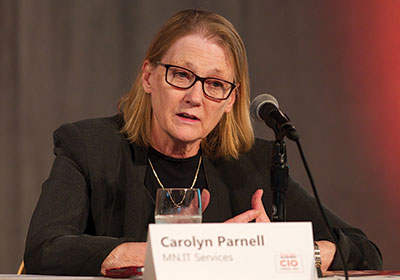 Parnell was appointed to her current position by Gov. Mark Dayton in 2011. She joined the administration after serving as the chief operating officer for information technology services for the Minnesota System of Colleges and Universities (MnSCU). Earlier in her career, she was the director of information technology at Minnesota Public Radio. She earned a bachelor’s degree from the University of Minnesota-Morris and her MBA from the University of Minnesota-Twin Cities. 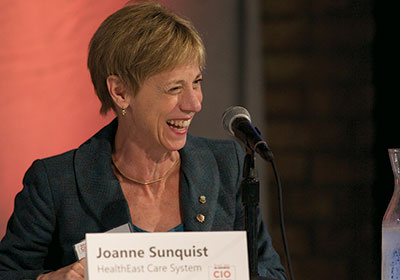 Sunquist joined HealthEast in early 2013 and is leading a major electronic health record implementation project. She previously served as the chief information officer of Hennepin County Medical Center. She was vice president of information services at Allina Health. Early in her career, she worked with Andersen Consulting. She holds a bachelor’s degree from the College of St. Benedict and a master’s in nursing administration from the University of Minnesota-Twin Cities.