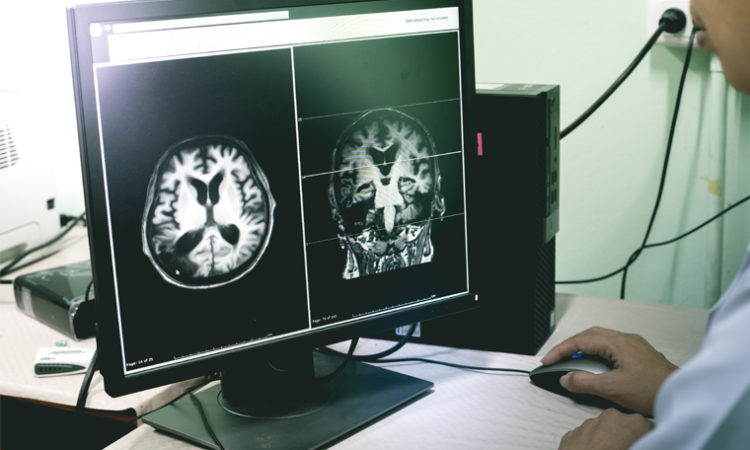 An examination of what a brain with Alzheimer's looks like. ( Photo by : Atthapon Raksthaput)

Combining RetiSpec’s machine learning program with the U of M’s imaging system is expected to accelerate time-to-market for a groundbreaking Alzheimer’s detection tool.
By Amanda Ostuni
October 17, 2018

The University of Minnesota is one step closer to getting to market an imaging system designed for earlier-than-ever Alzheimer’s detection, thanks to a newly announced partnership with Toronto-based medtech startup RetiSpec.

RetiSpec will get exclusive access to the system, with the idea that combining the technology with RetiSpec’s own machine learning program will advance the development.

The imaging system – developed by researchers for the university’s College of Pharmacy Center for Drug Design– scans a patient’s eye to detect small quantities of a protein called beta amyloid.

What makes the system unique is that it can do this before the protein collects into large enough clusters to form plaques in the brain, the standard biological sign of Alzheimer’s progression.

“The problem is that today we diagnose Alzheimer's when it is already affecting the way we think and reason, and it is too late,” said Eliav Shaked, founder and CEO of RetiSpec, in a statement. “With this new technology, we envision facilitating a noninvasive, simple, and cost-effective screening of Alzheimer’s disease pathology years before the emergence of clinical symptoms.”

The disease is degenerative and develops slowly over decades, with symptoms showing a little at a time. Symptoms of Alzheimer’s – which, according to the Alzheimer’s Association, affects an estimated 47 million people worldwide at a total cost of $604 billion – include cognitive impairment and lack of awareness. Complications can ultimately lead to death.

The worst of the disease’s impact could be limited, and quality of life for victims improved if detection is made early enough. That’s the idea of the new technology.

“This early detection technology holds great promise not only in indicating when to begin treatment for Alzheimer’s, but in monitoring the effectiveness of treatments in individual patients over time,” said researcher Swati More, associate professor in the CDD, in prepared remarks.

The university’s imaging system has been tested already in preclinical studies, and was able to detect the disease in mice 25 percent sooner than currently-used methods based on visible plaque formation.

The partnership with RetiSpec was struck in the wake of the latest trial, a successful pilot clinical study involving 31 human participants – some with and some without Alzheimer’s.

By integrating the imaging system into its learning platform, RetiSpec will be able to conduct data analysis while the combined technologies are tested as a complete solution in an upcoming three-site Alzheimer’s-diagnosing clinical study.

If advanced into commercial viability soon enough, the screening technology would be the first of its kind on the market.