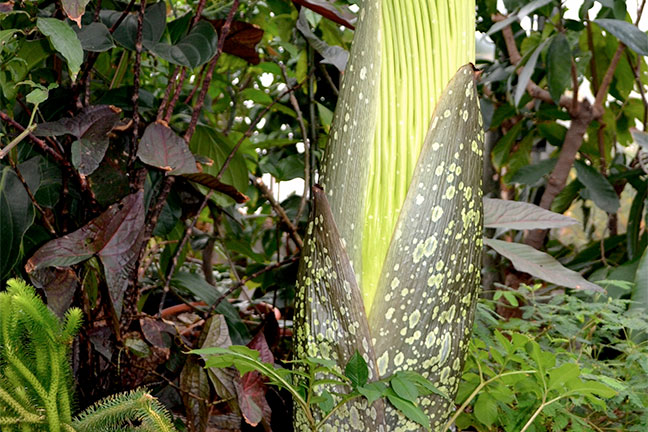 Chauncey the Corpse Flower is closer to getting a new home after funding to rebuild the U of M College of Biological Sciences Plant Conservatory was included in this year's Legislative bonding bill.

The University of Minnesota’s College of Biological Sciences was one of the winners in this year’s state bonding bill, especially its beloved but crumbling plant conservatory. Now, thanks to $4.4 million in funding, a brand new facility is closer to growing on the St. Paul campus.

After three years of fruitlessly seeking the largesse of state legislators to build a new conservatory/greenhouse (or Plant Growth Research Facility), the College of Biological Sciences (CBS) finally hit pay dirt this spring, when the Minnesota Legislature agreed to cover $4.4 million of its $6.6 million cost with bonding proceeds.

“We still have private dollars to raise to cover our portion of the total cost, but this marks the beginning of a new era for this important teaching and research resource,” CBS Dean Valery Forbes wrote in a blog post.

The CBS Conservatory is probably best known for Chauncey the Corpse Flower. Every seven years, the six-foot-tall flower, native to Sumatran rain forests, blooms, emitting a scent often compared to rotting meat. When it last bloomed for two days in February 2016, more than 6,000 people visited the Conservatory to experience its sight and smell.

But the Conservatory is much more than that. It houses the most diverse collection of plant species in the Upper Midwest – more than 1,200 in all. Its curators care for rare and endangered plants, and crucially to the state’s agriculture business interests, plants that show developing economic potential.

It’s also a big draw in attracting biology students to the U, which says its replacement “is essential to meet increased demand for enrollment and to secure a strong return on investment in the rapidly growing life sciences.“ Some 33 faculty, 40 teaching assistants and four support staff are currently teaching 13 courses there.

And, as evidenced by Chauncey’s popularity, the building has a strong outreach function. Regular visitors include school groups, horticulture clubs, K-12 educators and the general public. The greenhouse has brought national attention to the U’s undergraduate biology program due to its signature programs, while also lending itself to STEM education, which requires a living plant collection where extremes of diversity and adaptation are displayed and studied.

The Conservatory is part of a CBS education curriculum meant to produce the next generation of leaders in agriculture and food safety, environmental protection and restoration, as well as “the production of natural and synthetic products for medical and non-medical uses.”

But in actuality, the U says, it is an aging greenhouse that is literally falling apart. It’s fragile and costly to operate, rife with problems that are expensive to fix. Environmental, structural and functional deficiencies, such as the failure of seals around large glass panes and extensive cracking and spalling of the exterior concrete masonry, have put it on the brink of extinction.

The lack of proper temperature control threatens fragile tropical and desert plants like Chauncey. And while having the smallest footprint of any building on the St. Paul campus, the Conservatory has the highest energy use and the second-highest C02 emissions.

But situation took a huge step toward changing after Gov. Mark Dayton requested $4.4 million for the Conservatory, and the amount was ultimately included in the bonding bill that passed at the 2017 legislative session.

Under the U’s plans, a new, 12,000-square-foot structure would be built, and the existing greenhouse demolished. The new CBS Conservatory greenhouse would be “a specialized unit that serves the related educational missions necessary to ensure the state’s agricultural future.”

According to the school, it will boast humidity and lighting controls, to be monitored via the master greenhouse campus control system. Upon its completion, plant specimens and program activities currently housed in the existing greenhouse will be moved to the new facility, followed by the demolition of the old structure.

The new greenhouse, it says, “will breathe new life into a diverse encyclopedia of rare and spectacular plants by replacing an isolated greenhouse already deteriorated beyond repair with one that is energy efficient and integrated with existing facilities for teaching and research.”

For Chauncey the Corpse Flower, it may be a new home to die for.