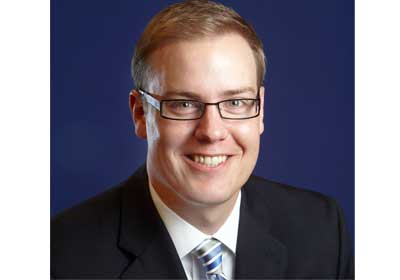 Phillip Trier, who currently oversees U.S. Bank’s commercial banking division in the Twin Cities, will take on an expanded role as president of the local market.
June 07, 2013

Trier succeeds Elliot Jaffee, who in February was promoted to lead the company’s national commercial banking operations. He had served as president of the Twin Cities market since 2006.

Minneapolis-based U.S. Bancorp, the parent company of U.S. Bank, said Tuesday that Trier joined the company in 2000 as a portfolio manager and currently serves as a senior vice president. In his current role, Trier oversees U.S. Bank’s commercial banking division in the Twin Cities, which serves more than 500 businesses.

The promotion to president of the Twin Cities market, which is effective Saturday, represents an expanded role for Trier, who told Twin Cities Business in a Tuesday phone interview that he will continue to oversee the company’s local commercial banking division.

In his expanded role, Trier will oversee the bank’s local advisory board, which he described as a “committee of executives and nonprofit leaders that we rely on for advocacy and advisory services—they’re really plugged in to what’s happening in the community.”

Trier will also chair U.S. Bank’s Twin Cities Market Leadership Committee, which is essentially a group of company leaders who oversee various divisions in the Twin Cities and who meet monthly to discuss market trends, among other things.

“To have the opportunity for a more senior leadership role in the Twin Cities is a great opportunity and is one that I’m really excited about,” Trier told Twin Cities Business.

U.S. Bancorp employs about 11,000 in Minnesota. While it doesn’t break out financial data for individual regions, the Twin Cities is one of the company’s largest markets, according to Trier.

“The Twin Cities is U.S. Bank’s hometown, and it’s critical that we have strong, visible leaders here,” Chairman, President, and CEO Richard Davis said in a statement. “Phil is an enthusiastic and talented banker, one who is incredibly plugged in to our local community, and I look forward to him taking on this very important role.”

Jaffee said in a statement that Trier “has been a key contributor to the bank’s success locally” and “his strong ties here and solid track record as a commercial banker make him well suited for the Twin Cities market president role.”

U.S. Bancorp is Minnesota’s largest bank-holding company based on assets, which totaled roughly $355 billion as of March 31. The company operates 3,080 banking offices in 25 states.