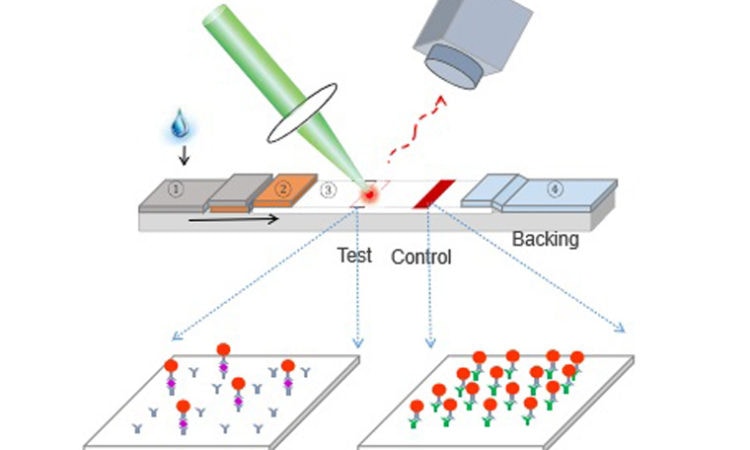 Vigilant Diagnostics' method includes the application of a laser to a blood or urine sample and the use of an infrared camera to "see" positive results. (Credit: University of Minnesota)

The company is developing tech to greatly boost accuracy of common flu and malaria tests.
By Don Jacobson
November 22, 2017

A University of Minnesota medical technology spin-off firm seeking to significantly improve the sensitivity and speed of infectious disease detection says it has tapped a Chinese investor to complete a seed financing round in addition to landing a $300,000 National Institute of Health commercialization grant.

Vigilant Diagnostics LLC, co-founded in 2014 by U of M mechanical engineering professor John Bischof, University of Toronto researcher Warren Chan and several colleagues, is developing a technology called Thermal Contrast Amplification (TCA), which the company says can increase the accuracy of existing body fluid tests by up to eight times.

Under the system licensed from the U, a laser beam is employed to heat the gold nanoparticle-biomarker complexes used in common “lateral flow assays” (home pregnancy tests are a well-known example of a lateral flow assay). This enables lab technicians using an infrared camera to visually detect positive test results in blood and urine samples down to a much more minute scale, thus greatly improving the accuracy of these widely-used assays at a relatively low cost.

Vigilant Diagnostics CEO Jon Brodd told TCB the start-up, currently based in Stillwater, has attracted the financial interest of backers in China who see the TCA technology as a possible boon in Asia, where it could be deployed on a large scale to greatly improve the region’s ability to accurately screen for influenza, malaria, Clostridium difficile and other bacterial infections.

“I was invited to a conference in China and we essentially closed our initial investment round on almost the spot,” he said, declining to identify the investor or a dollar figure. “We’ve got working prototypes and demonstrable improvements in the sensitivity of the tests, so now we’re looking at quickly building a team and setting China as our initial focus.”

Bischof, a distinguished McKnight professor at the U, last month was appointed interim director of its Institute for Engineering in Medicine. He is described as a renowned researcher in thermal bioengineering, having contributed to applications in therapeutics, regenerative medicine and now in diagnostics, and receiving international attention for his research in nanomedicine.

Research published last year by Bischof, Chan, U of M scientist and Vigilant Diagnostics co-founder David Boulware and others reported that a prototype TCA “reader” they have developed demonstrated up to an eight-fold enhanced sensitivity for influenza, malaria, and Clostridium difficile among body fluid assays.

The need for more accurate testing, the company says, is great. Despite recent advances in rapid influenza diagnostic tests, false negatives due to poor sensitivity contribute to disease transmission, preventing thousands from receiving appropriate antiviral treatment. Among vulnerable populations such as children under five years of age, especially in developing nations, the consequences of false negatives during flu pandemics can be fatal.

“It’s all moving very quickly, and our plan now is to move on to a ‘Series A’ financing round,” said Brodd, who previously honed an extensive background in nanotechnology as founder and CEO of Cima Nanotech, which pioneered transparent conductive film solutions used in plasma TV screens and other applications. “All of this works, it’s been proven as an easy-to-understand and low-cost solution, and now it’s a question of scaling it up.”

Meanwhile, Vigilant has also received a $300,000 Phase I commercialization grant from the NIH under the federal Small Business Innovation Research (SBIR) program to develop a portable TCA reader which is functionally equivalent to its existing desktop version.  This hand-held reader could be deployed in the field and be used to deliver the same accurate results outside of a lab setting, the company said.