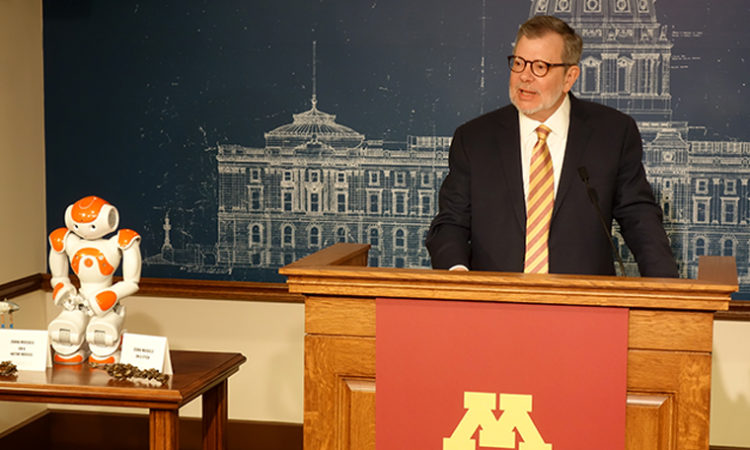 âWe deliver on what we promise to do,â U of M President Eric Kaler said Wednesday while releasing the Uâs list of budget requests. ( Photo by Peter Callaghan/MinnPost)

U of M President Kaler Asks for Over $300M More in Funding, Offers Advice in Last Pitch to Legislature

If his funding request is adopted, Kaler said he thinks the U of M could keep tuition increases at inflationary levels at the Twin Cities campus and at zero at the other four campuses in the system.
By Peter Callaghan
January 10, 2019

Before what will be his final session of the Minnesota Legislature — his final time trying to persuade lawmakers to keep the University of Minnesota in their thoughts, prayers and budgets — Eric Kaler was asked for his perspective on a task he doesn’t seem to relish.

So every year, the university’s president — Kaler since 2011, Joan Gabel starting July 1 — comes to the state Capitol with the mission of reminding some and convincing others of the importance of the U of M’s mission, of what he termed “a treasure for the state of Minnesota.”

“We deliver on what we promise to do,” Kaler said Wednesday while releasing the U of M’s list of budget requests. He claims the U of M’s economic impact is $8.6 billion a year, and touted the school’s role in developing cures and treatments in medicine, advances in agriculture and work in alleviating societal ills.

“We’re a talent magnet,” he said. “I firmly believe that the future of the state of Minnesota begins at the University of Minnesota.”

But what sounds like an easy sell hasn’t always been easy. Such a massive institution can also be the source of resentments and a stand-in for the culture wars. In 2016, the Legislature demanded new policies for the U of M in the use of fetal tissue from elective abortions in research. Last year, a position posted at the U’s medical school for a “reproductive rights advocacy fellowship” became an issue in the appointment of a new regent.

Kaler said he doesn’t expect issues like that to cloud his spending request this session. And he balked at a description of his or the school’s relationship with the Legislature, particularly Republicans, as “troubled.”

“I think we have good communication,” he said.

Yet he did acknowledge a national trend of Republicans being more skeptical of the value of public universities. “Republicans typically poll with a lower opinion of higher education and I think that translates into the decisions that will be made,” he said. “But I don’t think there is a bad relationship. I personally have good relations with members on both sides of the aisle as do other members of my senior administration. But I do think that tension … does reflect some of the national conversation that’s going on.”

To overcome skepticism, universities like Minnesota’s try to relate their work to the real world. So Wednesday, Kaler brought some people who might help with that: a Nigerian immigrant seeking a medical degree at the U of M’s Rochester campus who hopes to return home to work as an obstetrician; a leader of a volunteer-driven effort to find and eliminate invasive aquatic species; cross-departmental researchers trying to find way to diagnose autism earlier to help patient intervention.

Kaler’s staff also distributed a state map showing the locations of 236 cities and towns where the university partners with local health systems to train providers. And, yes, they mentioned the Honeycrisp apple.

What does he want? Kaler released his requests for both operating funding and construction funding. The operating request is for an increase of 6.7 percent over current levels: $30 million more in the first year of the two-year budget period and $27 million additional in the second year.

That is a lower request from last budget period and is about the average of recent biennia, he said.

While traditionally the Legislature writes its so-called bonding bill for construction projects in even-numbered years, it has recently included smaller bills in its odd-year list of things to do.

If his funding requests are accepted, Kaler said he thinks the U of M could keep tuition increases at inflationary levels at the Twin Cities campus and at zero at the other four campuses in the system: Crookston, Duluth, Morris and Rochester.

What happens if what Kaler termed a “restrained and reasonable request” isn’t met?

“We will minimize them to the greatest degree we can, but we live in an environment where we have inflationary pressures and we have needs to make investment. So we need to increase our top-line revenue, which either comes from the state of Minnesota or from tuition.

“There’s always a very tight link between the state appropriation and the tuition that we set,” he said. The university’s 12-member board of regents approves tuition rates.

What advice would he leave his successor in how to deal with the Legislature? “It’s all about building relationships and convincing people who sometimes don’t have a particularly strong view or opinion of higher education that, indeed, it is that investment that drives … the future of the state of Minnesota,” he said.

“Everyone knows that when you’re in a debate with someone who doesn’t share your point of view it can be frustrating if you don’t succeed in changing their minds,” he concluded. “So my advice to my successor is be persistent and stay at it.”