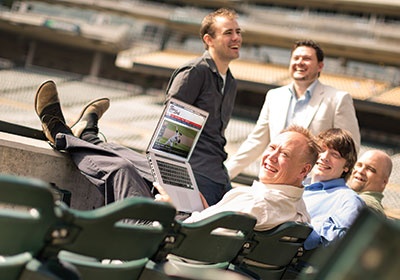 Twins Daily: A Baseball Fansite That May Actually Make Money

From the blogosphere emerges a serious business model.
June 01, 2014

Blogging is not a business. OK, it is for an infinitesimally small subset of bloggers. But for all the rest it’s a way station of passion or obsession until life and free time no longer allow it. Bloggers have made the Internet a deep well of quality specialized content unparalleled in modern history. But it ain’t a living.

“The life of a blog is two to four years,” says John Bonnes, managing partner and co-owner of Twins Daily, an upstart local website devoted solely to the Minnesota Twins. “I was burned out after four years and I started out about as gung ho as they can be.”

And money isn’t a motivator. “I made $50 to $100 per baseball season,” says Parker Hageman, Twins Daily partner and longtime author of the Twins analytics blog Over the Baggy.

Today, though, the two, and partners Nick Nelson, Seth Stohs, and Brock Beauchamp are on a glideslope to income, possibly even careers, at a website built around a fan base’s love for a team. The possibility is as improbable as it is audacious. The foundation is America’s insatiable interest in sports; the fault line is the Internet’s determined resistance to monetize quality content.

Sports are one of the Internet’s more paradoxical content centers. “People’s expectations of sports and coverage are really high,” says Howard Sinker, the editor who runs the Star Tribune’s online sports coverage. The public appetite for sports is “insatiable,” says the publisher of a major local news site with millions of page views, who asked not to be identified.

And baseball has a special affinity for analysis, due to the nature of the game. “Baseball is such a math-based game,” says Beauchamp, a web developer who used to run an online baseball forum. “It’s really been altered by the Internet and its ability to produce data and alternative ways of looking at things.”

The takeaway is that there is a large audience of people “really thirsting for knowledge,” says Hageman, who works as an analyst for Life Time Fitness by day.

The problem is sports have been a black hole on the revenue side for publishers. “Sports sites are unique and can be difficult to monetize,” says Ryan Dolan of the Ryan Media Group, which represents Twins Daily in the advertising marketplace. “There’s a limited range of advertisers to turn to and a lot of competitors.”

Local news and analysis site MinnPost generates a similar number of page views as Twins Daily does, but publisher Joel Kramer long ago turned to a mix of sponsorships, events, grants and memberships to supplement the limited vein of advertising available. Bonnes says national advertisements generate only 20 to 60 cents per thousand page views for Twins Daily.

“None of us make money at banner [ads],” Dolan notes. “The income is in custom content, social marketing, events, sponsorships. That’s where you will find premium CPMs [cost-per-impressions].”

As a result, “Twins Daily really is a big experiment,” says Bonnes, who works as an IT consultant based in Minneapolis. “An experiment to see if we can bring revenue to blogging.”

More than the sum of its parts

The gestation of Twins Daily actually happened under the auspices of the Star Tribune, with which it now competes for readers and advertisers. Sinker, charged with beefing up the paper’s online baseball content, but without resources to hire additional staff, turned to several local bloggers in 2009 and asked to repurpose their content, which would appear on StarTribune.com under the brand “Twins Centric.”

The affiliation gave the bloggers, who didn’t know each other well—let alone function as a group—“an opportunity to build trust,” says Bonnes. It also gave the partners visibility in a broader community of casual baseball fans and within the Twins organization itself. Five years ago, the team had little to no formal interaction with the blogging community and, arguably, little awareness of the key players.

“I think the Strib partnership was a significant benefit to their brand,” says Twins president Dave St. Peter, even though the brand didn’t necessarily even exist then.

Hageman got to know Bonnes through freelance writing for the Twins scorecard, which Bonnes coordinates in a barter arrangement with the team. There were partnerships in several one-off e-publications charting the off-season and annual trade deadlines. “It led us to believe there was strength in coming together,” Bonnes recalls.

A Fox Sports website, scout.com approached them in fall 2011. “But it was subscription-based, and we didn’t believe in that approach,” Bonnes says. Several of the partners went to Murray’s restaurant to talk about possibilities. “John had a business plan,” Beauchamp recalls. “Most of us just wanted to distance ourselves from becoming a fan site. It’s a fine line to keep your autonomy.”

“We also didn’t want to replicate what the paper does,” says Hageman. Only Bonnes had aspirations of more than amalgamating their blogs under a single brand. “We wanted to do our own thing. John insisted that we create reader forums and offer the opportunity to the community to create original commentary.”

Bonnes’ vision was a big-tent approach to the genre. “I care deeply about the integrity of sports writing,” he says. “I hate cookie-cutter sports writing.”

The approach also results in “a farm system of new voices that build the site further,” says Beauchamp.

Twins Daily was born at the outset of the 2012 season.

The core was the partnership of bloggers. Hageman’s specialty is breaking down video of players’ swings or pitching motion, and illustrating various factors that affect their performance through it. Nelson writes a statistically based blog with an edge—he’s one of the team’s sharper critics in the blogosphere. Stohs, based in Warroad, covers the Twins’ minor-league teams with an obsessive zeal and enthusiasm, while Beauchamp manages the forums and back-of-house functions for the site. Bonnes has largely given up blogging, focusing his energy on revenue.

To the casual observer, Twins Daily is the antithesis of a clean, modern, website. Its design is busy, its organization rather complex, and due to so much enthusiast and forum content, the quality of writing can be uneven. But none of that has held it back.

“They are very good bloggers,” says the Strib’s Sinker, “but they are also creating added value,” he notes, pointing to the site’s coverage of the minor leagues and Hageman’s prowess with video as content areas the newspaper lacks the resources to offer. And each October, when the paper ceases regular coverage of the team for roughly 20 weeks, Twins Daily offers new content every day.

There were fits and starts. An ad-selling partnership with MinnPost last year was an education, but largely unsuccessful. “Minn- Post sells roughly 400K in revenue on roughly the same traffic that we generated $20,000 off of,” Bonnes explains.

A dedicated marketing rep was needed, but even at 20 percent commission, which is high for the industry, a tenfold uptick in revenue would yield only a $40,000 salary. But salvation came in an email.

Bonnes was about to get an offer he couldn’t refuse.

“I was a big fan,” explains Ryan Media’s Dolan. “I emailed John last year and said communities of sports fans are communities that brands like to be around. The sports audience that can be monetized are [people who are] web-savvy and make a good income.”

Bonnes showed him metrics that Dolan thought were monetizable, in multiples well beyond what Twins Daily had achieved. The Twins Daily reader, according to Bonnes, is a highly educated married man in the 25-to-49 age demo. He is affluent, with over 40 percent of readers earning more than $100,000, and 77 percent possessing a college degree. Last year the site had 8.4 million page views, with 70 percent of visits digging past the home page. Forum users are 40 percent of the site’s traffic. Finally, traffic for 2014 was trending 31 percent higher than the previous year, before the start of the baseball season.

Dolan was particularly impressed with Bonnes’ effort building an audience of reader contributors. “Twins Daily has built a community, the engagement is so obvious. Brands like that,” he says. “John’s vision makes the site more marketable to partners.

Dolan brought in Summit Beer and Ticket King as sponsors in 2013, but felt there was real potential to expand the lineup for 2014. In October, he struck a deal with the University of Minnesota fan website Gopher Hole to share a full-time sales rep. Summit and Ticket King have renewed, and the rep has brought in clients as disparate as Metro Transit, Papa John’s and a local law firm.

“If John keeps his overhead tight,” says Dolan, “I think there’s a nice little business here, because you don’t have legacy-media cost structures.” Dolan calls six figures of revenue “very doable” and Bonnes expects Twins Daily to see a fivefold increase this year alone. For now, the partners are not taking any money out of the company, which is not arduous, since Bonnes estimates they only put in an hour or two a day of work for the site.

One thing that would really help Twins Daily is a good baseball team in town. One of Bonnes’ more impressive feats is building a site during a three-year period of unprecedented losing and fan disinterest. “Traffic will explode if this team starts winning,” explains Hageman.

That would drive page views and revenue, and make credible what once seemed a fantasy for the partners: being able to quit their day jobs. “All of us would like this to be a full-time living,” says Hageman. “That is the best-case scenario,” Bonnes concurs. “I could see it happening in about five years.” Part of that optimism is rooted in the feeling that Twins Daily is scalable.

“I think there is an opening for other ‘Daily’ sites,” Bonnes says. He is actively working on creating a Wolves, Vikings, and Wild Daily.

If it comes to pass, the partners all point to Bonnes as the visionary. “John’s very entrepreneurial,” says Hageman. “He’s good at figuring out systems and building them.”

“A lot of it is John’s willingness to work at it as hard as he can,” says Sinker. “I’m not sure that many people would have thought there was a business there.”

Asked to sum things up, Bonnes defaults, intriguingly, not to commerce, but to a business’ ability to tie like-minded people together, feed the life of the mind, even ease the struggle of the artist.

“I’m tired of people apologizing for being sports fans. Sports builds some of the best communities out there,” Bonnes says. “Because we grew this organically, we don’t have a corporate master. We can experiment. People can say it’s just baseball, but to me Twins Daily is the ultimate writer’s workshop.