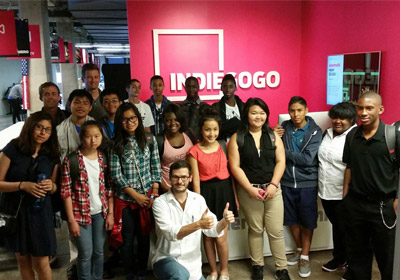 A posse of Twin Cities teenagers is spending the week in Silicon Valley, immersed in a high-tech culture in which they may someday find themselves employed.

Sixteen local ninth-graders were given the opportunity to head to California for the week-long tech camp under a program called “Silicon North Stars,” which was founded by Minnesota native Steve Grove and his wife Mary, both of whom are Google executives.

Half of the teens on the trip are from STEP-UP, a summer jobs program that R.T. Rybak helped start when he was Minneapolis mayor. The other half hails from Washington Technology Magnet School in St. Paul. “The goal is to target youth from underrepresented communities who would otherwise not have this opportunity, and expose them to technology careers at a critical age in their development,” Steve Grove said in a statement.

The group embarked on their trip this past Sunday and will return on Saturday. The itinerary includes campus visits and talks at the offices of tech giants Google and Facebook, as well as stops at Stanford University, TaskRabbit, Indiegogo, and the Target Innovation Center, among other places. They'll also be exposed to a group of startups at an incubator in San Francisco.

The group has been documenting its trip on social media, and it appears the teens got to visit YouTube on Tuesday. (You can follow their activity here.)

The participants will also receive career coaching from tech professionals and participate in team-building activities, among other activities. The trip will culminate with a project in which students will be asked to leverage everything they've learned—and to create their own startup company ideas, which they will pitch to a panel of judges.

Kyle Coolbroth, CEO of the recently expanded “co-working” firm CoCo, worked with the Groves on the initiative. So did Generation NEXT, an education-focused organization led by Rybak. The Minneapolis public school system and Reve Academy are also helping support the trip, which organizers described as the first in a series of programs that will help connect Minnesota and Silicon Valley.

Despite their geographic distance, however, some other work has already been completed to bridge the divide.

For example, back in 2011, Google Chairman Erik Schmidt joined then-Mayor Rybak at CoCo's downtown Minneapolis location to discuss entrepreneurship in the state. Schmidt emphasized the importance of math, science, and technology education for the future of our economy. He also recommended that small businesses hire tech-savvy youth for technology consulting, a move that he says would give “disaffected youth” a sense of accomplishment and help propel small businesses.

In early 2013, Google committed to sponsoring two years’ worth of entrepreneur events in the state.