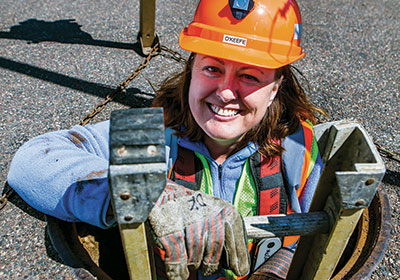 Ever wonder when you flip on your garbage disposal, flush your toilet or rinse off in the shower, where all the waste goes?

Shawn O’Keefe knows only too well. As the City of St. Paul’s sewer maintenance engineer for the past nine years, she manages a team that works in nearly 80 miles of sewer tunnels that twist beneath the city’s streets and connect to hundreds of miles of pipe sewers.

Depending on the weather, typical days entail spending up to six hours in the sewers (less in the summer). That flowing sewer broth can stew in the heat, O’Keefe says.

The majority of work involves cleaning and inspecting the predominantly sandy rock spaces. O’Keefe mostly manages the operation from above ground.

“We have a lot of safety precautions because it’s considered a confined space,” she says. “The crew working below is always positioned between two manholes and is in constant contact.”

Hazard pay is factored into the labor of O’Keefe and her crew, but it’s a longstanding figure. “For a day’s work underground, whether I spend eight hours in the sewers or one hour, it’s $2. That rate was established long ago when $2 maybe meant something.”

Otherwise, O’Keefe earns $48 an hour doing her job. She says what she and her team do is worth it.

“The basis of civilization is effective removal of waste,” she says, “and people tend to take it for granted.”