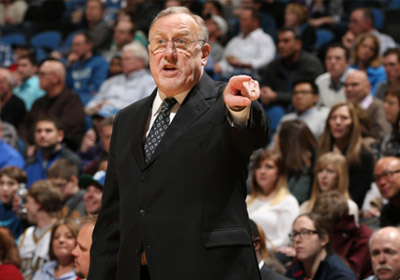 Head coach Rick Adelman will stay on with the team in a consulting role; candidates for his job reportedly include Michigan State coach Tom Izzo and Iowa State coach Fred Hoiberg, among others.
May 01, 2014

Minnesota Timberwolves head coach Rick Adelman announced Monday that he’s retiring from coaching, but said he will remain with the franchise in a consulting role.

Adelman, 67, served as head coach of five different NBA teams over the last 23 years, including the Portland Trail Blazers, Golden State Warriors, Sacramento Kings, and the Houston Rockets, before spending the last three years with Minnesota.

“On behalf of the Minnesota Timberwolves, I would like to thank Rick for all he has done for our organization,” Timberwolves owner Glen Taylor said in a statement. “Under Rick's leadership, our team has improved each of the past three seasons. It has been a pleasure getting to know Rick and his wife Mary Kay, and I wish them the best in retirement.”

Taylor also recently made the news when he committed to purchasing the Star Tribune, for $100 million. Read Twin Cities Business’ in-depth profile on how Taylor has transformed the Timberwolves here.

Adelman was one of only eight other NBA coaches to accumulate over 1,000 career wins as head coach.

Prior to Adelman taking over as Minnesota’s coach, the team had won 15 and 17 games in its two previous seasons. For the three years he helmed the team, it won 26, 31, and then 40 games this most recent season.

According to the Star Tribune, Adelman signed a four-year contract in 2011 that included an option for him to leave after three seasons.

“Coach Adelman is truly one of the greatest coaches in our game’s history, and he has helped restore credibility and respectability to the Timberwolves franchise through what he stands for both on and off the court,” Saunders said in a statement. “He has impacted the NBA with his offensive vision and influenced the philosophies of many coaches in the league.”