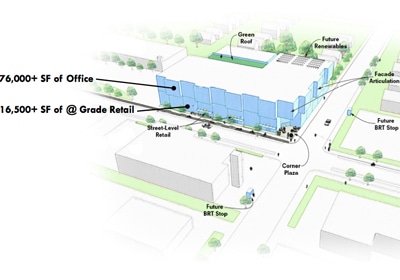 Fridley-based Thor Construction Company is moving ahead with plans to relocate its headquarters to north Minneapolis. On Wednesday, Thor announced its vision for a new four-story, $30 million project that will include office and retail space at the corner of Plymouth and Penn Avenues.

Richard Copeland, founder and chairman of Thor, previously outlined the company’s plan to TCB in a March story about the business climate on the Northside. Thor Construction, with revenue topping $150 million, is the largest minority-owned business in the state. At the time, Copeland told TCB: “We’re asking for supporters and partners in this effort, but we’ve got to take the lead. The African-American business community needs to lead that initiative.”

Thor is hoping to break ground on the project late this year. If that schedule holds, the project could open in the spring of 2018. The new building would include 76,000 square feet of office space and 16,500 square feet of ground floor retail space. A 600-stall parking ramp will be attached to the building.

Thor CEO Ravi Norman said that Thor and its affiliate companies will occupy 11,000 to 15,000 square feet office space in the building. Including Thor’s own space, Norman said that the company currently has letters of interest with other organizations that would fill 63 percent of the office space.

Norman said that the site, which has been owned by the city of Minneapolis, is currently vacant.

“We like the historical significance of Plymouth Avenue as it relates to African-American entrepreneurship,” Norman said. “We think this is an opportunity for us to lead with our dollars, time and actions, and not just with our words.”