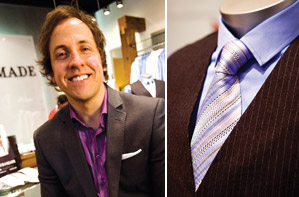 This Time, the Strategy is Hammer Made

Stop by the Galleria mall in Edina and you’ll find Jason Hammerberg enumerating the advantages of a well-tailored men’s shirt: explaining why someone might opt for a smaller collar now, or how a shirt that’s conservative for day can be restyled for evening. Hammerberg should know how this stuff works—he designed it all for his namesake store, Hammer Made.

The store is new (opened November 27), but the concept isn’t. Just down from the 575 square feet that Hammerberg occupies is the retail space his employer used to do business in. They might have been direct competitors if Kuhlman, the seller of men’s shirts and jackets with European styling, hadn’t flamed out early.

Hammerberg helped create the Kuhlman look but now designs his own Hammer Made shirts and accessories. He’s careful and respectful in talking about Kuhlman. Likewise, he’s taking a more cautious approach to growing his own retail business.

He says Scott and Susan Kuhlman did have a novel idea with their superfocused, high-design-for-moderate-prices shirt boutiques. But overly ambitious expansion led to Kuhlman’s demise in 2007, just four years after it was founded. Hammerberg left before things went sour, and three years ago launched his own clothing line, then called Humble Fashion, which he sold wholesale, custom, and on line.

“By selling wholesale, I could tell how people were reacting to the fit, the design,” he says. “Now I’ve pulled everything back in, so I can control it.”

The shirts he makes are “the guy’s little black dress,” Hammerberg says. “That’s what he’s wearing out and about with a pair of jeans or with a coat or with a full suit and a tie.”

He compares his Hammer Made shirts to luxury lines like Thomas Pink or Canali. But by buying his own fabric from Turkish and Italian mills and working directly with manufacturers rather than ordering through agents, Hammerberg can offer his shirts at roughly half the price—$75 to $125. “Mine is a quality-value play,” he says.

He’s brought investors on to help fund the eventual addition of more stores. But Hammerberg is taking it slowly, focused for now on opening his online shop in late March.