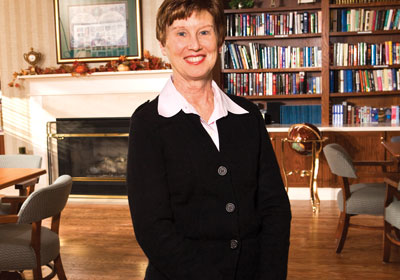 The Woman Behind Ecumen

Having shepherded the Minnesota Zoo and helped to save the Twins, Kathryn Roberts now leads the former Lutheran Board of Social Ministry into a new age of senior-living management.
January 11, 2010

As the steady leader who had successfully guided the Minnesota Zoo through a troubled post-start-up period and the public servant whose determination helped keep the Minnesota Twins from disappearing, Kathryn Roberts’ profile by 2003 was something like that of a high-powered miracle worker.

As the chairwoman of the Metropolitan Sports Facilities Commission from 1999 through 2002, she had spearheaded the 2002 legal battle to prevent the owners of the Twins and Major League Baseball from contracting the team after years of failing to land a new ballpark. The commission’s lawsuit literally rescued baseball for Minnesota and sparked momentum for a political deal that, many would argue, ultimately resulted in the construction of Target Field, which will open this spring.

No wonder eyebrows shot up that year when news came that she was appointed to take the reins not of some big government agency or a well-known company, but a quiet (though sizable) nursing-home operator affiliated with the mainline Evangelical Lutheran Church of America.

Roberts seemed an overqualified choice to a lead a 140-year-old nonprofit that for many years had quietly carried out its social mission of tending to its elderly nursing home residents, but was essentially stagnant and had showed little inclination to change.

But there was something most observers didn’t know. The Board of Social Ministry’s leaders were incubating ambitious plans. They would need someone of Roberts’ savvy and track record to turn the organization into a cutting-edge senior housing developer and provider of the kind of innovative care services that seniors and their families were clamoring for.

In short, they wanted Roberts to change the way Minnesotans live the final years of their lives. And as an outsider, she’s proven to be just the person to direct what has become a 4,000-employee entity serving 11,500 “customers,” with more and more to come.

A New Name and Direction

Established in 1862 as the Lutheran Conference (Swedish) Relief Program, the agency when Roberts arrived operated about 21 nursing homes and 46 other senior housing facilities for about 4,200 people, mostly in rural Minnesota. Its 2003 revenues were $94.7 million, making it the nation’s fifth-largest nonprofit senior-care provider.

An executive recruiter contacted Roberts for the Board of Social Ministry’s leadership position. “My predecessor had been here for 20-some years,” she recalls. “And really, he left behind an organization that had a bunch of nursing homes where the care was absolutely fabulous, deeply rooted in our faith-based history. But it was kind of a sleepy, unknown company.” As for the agency’s board members, “I had had the impression they were a fairly conservative, risk-averse group.”

Roberts may have seemed like an unusual candidate, but she has made a career of taking unusual paths. Risk averse she’s not. She’s earned graduate degrees in education and education administration, served as director of the management analysis division of the state Department of Administration and as acting commissioner of human rights, among other state government positions. She took the job at the Minnesota Zoo in 1986, where her collaborative, outside-the-box style was honed.

But as she began to interview at the Board of Social Ministry, her perceptions quickly changed—as it became clear that the board members wanted change themselves. “The board said, ‘We really need to transform the business,’” Roberts recalls. “I remember when I came in and they asked me the question, ‘What is the hospitality model in senior services?’ So I’m on Google, I’m trying to figure out what the ‘hospitality model’ is because I hardly knew what ‘senior services’ were. They knew they needed something different than what was going on.”

Roberts’ marching orders: Change Ecumen’s mix of revenues and instill in it a new culture that encourages new ways of thinking and the creation of better approaches to senior living—far beyond the old paradigm of nursing homes.

Roberts’ first step was to examine the revenue mix. Five years ago, nursing homes accounted for 76 percent of the company’s revenues. “If we would have kept the number of nursing homes that we had, and had continued to provide the services under Medicaid that we do,” she says, “we would have been a 140-year-old nonprofit that would have gone out of business.”

With Roberts in charge, 2004 would be the great year of change for the Board of Social Ministry. For one thing, it got a new name. “Ecumen,” derived from the Greek word for “home” (and related to the word “ecumenical,” suggesting a broadening of the Board of Social Ministry’s work), was evidence that the organization was pursuing a fresh direction.

That direction was codified in a five-year plan that Roberts laid out. “We know that about 95 percent of seniors will never be in a [senior-housing] setting,” Roberts says. “So if our mission really is about serving older adults where they live, we’ve got to figure out how to do that.”

And that was how Ecumen took a both-feet leap into the development of market-rate senior housing—standard housing options whose costs are unsubsidized by the government, but which typically offer services such as meals and cleaning. Ecumen has built market-rate housing and expanded existing properties in Duluth, Detroit Lakes, Worthington, Chisago City, Mankato, Apple Valley, Hutchinson, and Owatonna. It also has opened a new residence in New Richmond, Wisconsin.

Ecumen’s compound annual growth rate in market-rate housing revenues is 27.6 percent, far outstripping its other business segments: nursing homes, federally subsidized residential communities for seniors, home care, management and consulting for other facility owners and investors, and clinical services for long-term care providers. If Ecumen meets its 2009 projections, its revenues will have grown 32 percent since Roberts took over. But in the future, market-rate housing should be only a part of Ecumen’s continued growth.

Under Roberts’ leadership, Ecumen has begun to extend its reach into other states, including Idaho, Iowa, North Dakota, and Wisconsin. It also has conducted development consulting for clients in Nebraska, Florida, Nevada, Oklahoma, and Washington.

For clients considering the construction of their own senior housing, Ecumen established a one-stop-shopping development entity, which Roberts calls “Team Ecumen.” Its members, all based in the Twin Cities, include the construction firm Adolfson & Peterson, architects Pope Associates, and commercial real estate market analysts Maxfield Research.

Riding shotgun on the group for Roberts is Steve Ordahl, Ecumen’s senior vice president for business development. A key player in the nonprofit’s reinvention, Ordahl coordinated its first real effort to build a new state-of-the-art senior housing complex: Duluth’s Lakeshore, a facility along Lake Superior on the site of a former Board of Social Ministry nursing home. With its 100 units of independent living, 40 assisted-living units, 60 rehabilitation units, and 20 units of “memory care” services for Alzheimer’s patients, Lakeshore—like most Ecumen facilities—features a high-tech innovation called QuietCare, which consists of a series of wireless sensors that continually transmit information to caregivers about any changes in residents’ daily routines.

“I think what marks Ecumen’s emergence is the services we can bring in, like our wireless technologies,” Ordahl says. “It can be very cutting edge. And the way we build and design our facilities is tailored to the communities they’re in—they’re all market driven and there is no cookie-cutter mentality.”

Another Roberts hallmark has been her determination to get Ecumen further into the potentially vast field of serving seniors beyond the “sticks and bricks” of housing and nursing homes and reaching them where most will always live—in their own houses. A model for that effort is Mill City Commons, a “virtual village” designed to help people stay in their neighborhood for life.

The members of Mill City Commons—who are not solely seniors—live in condos around the Guthrie Theater. By joining this “virtual village,” members have access to a wide variety of services, including transportation and personal assistants. All residents are connected on line via a members-only information and social networking site. Having helped the residents set up Mill City Commons, Ecumen is looking into taking the idea to other neighborhoods or organizations.

The Ecumen brand name is only six years old, and one of the company’s goals is to continue to build equity and recognition for that name. It has built the brand largely “from the inside out”—making certain that employees know how Ecumen differs from the Board of Social Ministry. The vast majority of its external “marketing” is word of mouth via the Internet, current and past customers sharing their experiences, employees touting the company, and various public relations endeavors.

“Our profile is increasing,” Roberts says. “We’ve become linked with congregations around the United States who have heard of Ecumen as another Evangelical Lutheran Church in America affiliate who’s providing great services for seniors.”

(Not all the attention that Ecumen has received has been positive. A recent Star Tribune series on nursing-home falls cited an incident in which a disoriented patient at an Ecumen facility died after a fall. Ecumen was not the focus of the series.)

Roberts adds that “there are lots of congregations around the country whose dream has been to provide services for their aging members. While these churches have land, they’ve always wanted to provide senior services, but don’t know how to do it.”

Roberts says that “we probably have a half-dozen locations that want us to come in and figure that out for them. The Ramsey Hill neighborhood [in St. Paul], for instance, really wants help in figuring it out. Edina, Bloomington—they know that people want to stay in their own homes and that people really need support to do it so that they’re not isolated and they’re getting the services they need. They need to be empowered to be as independent as they possibly can be.”