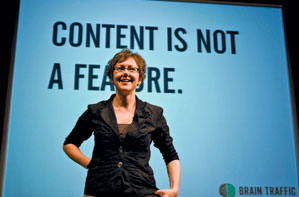 Though she’s a highly regarded practitioner of “content strategy”—that is, planning for the creation, publication, and governance of Web-site content—Kristina Halvorson, president of Minneapolis-based Brain Traffic, says she “never could have written” her new book alone. That’s true, because Content Strategy for the Web, due out in mid-August from New Riders, contains not only Halvorson’s expertise, but insights from a global group of editors that she recruited via Twitter.

Halvorson calls it “crowd sourcing.” “I had this chapter I was really struggling with. So I just posted on Twitter: ‘Hey, I have a chapter I’d really like some input on . . . who’s interested?’ I thought I’d hear from a couple people and I heard from, like, 40,” from Brazil, New York, Australia, Seattle, Nebraska, and elsewhere. She cherry picked a few particularly experienced or enthusiastic responders and posted the chapter for them. Their feedback was so helpful that she did it with two more chapters.

Halvorson says her “editors” were people who “had a stake in how I was representing the practice” of content strategy—“and that was invaluable.” 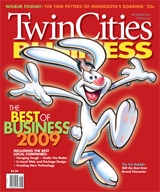