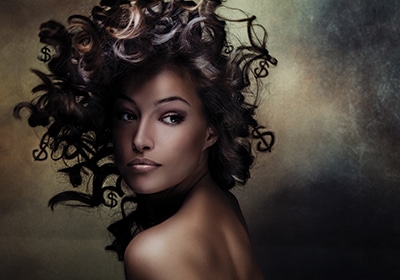 It’s a Saturday morning at Extensions Plus in Minneapolis. Owner Lillian Anderson ties tight braids into a customer’s scalp. Another walks in asking for a place to rest her wig. She’s performing as Etta James at a concert that evening and needs to spruce up her hairdo. Anderson goes back to braiding and then takes a needle and thread to the first customer’s hair to sew in a weave. The customer has been battling thinning hair and explains to Anderson that extensions have made her hair healthier.

Anderson takes a scissors to the weave, blending it with the woman’s natural hair, and finishes by curling everything, in what she calls “Hollywood-glam” style. The weaves and extensions women wear have become commonplace, but the journey they take from producer to consumer is anything but.

From the moment a lock is lopped off a woman’s hair at a temple in India to the point it finds its way to a buyer’s head, the human hair extension industry crosses states, ethnicities and socio-economic groups. The Twin Cities market has expanded exponentially since the first retailer opened its doors over 30 years ago. What was once a niche business has gone mainstream. Yet it remains the only trade where humans grow something on their body to enhance another’s. And whether you’re talking old-school weaves or modern extensions, it still all begins on someone’s head.

The human hair business is a rather hidden trade—unless you’re looking for it, you’re not going to find it. Minnesota’s hair extension sales industry started out in beauty supply stores such as Ed Perlman’s Minneapolis-based Variety Beauty Supply about 35 years ago. His was one of three stores selling hair—along with conditioner, shampoo, hair clips and other accessories.

In the beginning, the hair extension business typically targeted women with short, kinky, curly hair who wanted long, straight locks; it wasn’t until the late ’90s that the market diversified and white women became part of the clientele. Celebrity marketing, such as Jessica Simpson’s hair extension line that debuted in 2006, helped spur the human hair business into the $1 billion industry it is today, according to statistics from the Professional Beauty Association.

In 1992, Sunny Memberr and his wife, Lisa, started South Minneapolis-based Sunny’s Hair, Minneapolis’s first hair boutique, says partner Dafina Smith, selling solely extensions and wigs. In the last two decades, the retail hair business in the Twin Cities has taken off in the last decade, from three extension retailers to more than 30. Weaves and wigs are the province of these specialty vendors, but simple hair extensions are now the stock in trade of most salons.

The expanding market has fed competition. The biggest players are stores that have a direct relationship with vendors, says Perlman. Suppliers like Minneapolis’s 7 Mile Fashion have an advantage because they buy directly from Asian vendors that harvest hair and the factories that buy hair. They cut out the middleman and sell for less, Perlman notes.

That’s something that relative newcomer Lillian Anderson, owner of Extensions Plus in Minneapolis, knows too well.

Anderson is a long-tenured practitioner and one of the few hair extension retailers who also does the weaves for clients who purchase the extensions. Her clientele has shifted upmarket and diversified over the years. She’s keenly aware of the changing dynamics of the hair business. “[Asian-owned stores] have completely taken over the market,” Anderson says, putting traditional retailers like her at a disadvantage due to the inability to buy direct.

She opened her first store in 1998 in a 400-square-foot space on Bloomington Avenue with a $20,000 investment. She was profitable after the first year and saw 50 percent growth in the next. From there, she moved three times before settling down at an 800-square-foot location at 1023 Washington Ave. S. in 2010. Since the move, she’s seen 1 to 2 percent annual growth, but competition is keen. It’s particularly difficult, she says, to get name recognition with market leaders like Sunny’s in the game.

Anderson has reacted by specializing in custom weaves and offering hair application and styling. Anderson purchases ponytails of hair from Russia, India, China, Malaysia or Brazil and personally weaves them in for customers. By offering both retail and hair installation, she hopes to create a unique value equation.

Hair By the Numbers

The domestic demand for hair extensions is largely driven by celebrity trends, which means the market is heaviest on the trend-focused urban areas on the East and West coasts. Sunny’s—which has expanded to Atlanta and Phoenix since its inception in Minneapolis—has a large client base in the entertainment industry. Smith says the Twin Cities market has seen a shift since celebrity trends boosted the popularity of extensions. On one hand, the market has broadened—socioeconomically and racially. On the other, says Perlman, long-standing customers are buying less frequently in the inner city.

An average customer of Anderson’s will spend about $150 on hair and $150 each time they want to get it tightened—about twice a month. That’s about $3,750 a year, and the customer will have to buy new hair every two to four years, even if it’s the best quality. This is still relatively inexpensive compared to high-end salons that offer extensions.

For example, Rocco Altobelli in Roseville charges about $1,200 per session for wax bonding extensions, which last about two months. Clip-in extensions cost $700 to $800 for a 16-inch set, which includes cut and color. These need to be replaced every six months. (Prices can vary according to a customer’s needs, the salon notes.)

Perlman, who sells to mostly inner-city customers, judges the state of the hair economy by the use of credit cards. When he first started, 10 to 15 percent of purchases were on credit. Now, it’s 40 to 50 percent. He believes that’s a major indicator of the worsening urban economy.

“It’s a complex business,” Perlman says. Inner-city customers are buying less and they’re buying cheaper products, he says. The demand is still there, but it’s a matter of affordability.

Manufacturers have diversified their offerings exponentially. There were two types of hair when Perlman entered the business, he explains. Sunny’s alone buys from up to 35 different vendors, each selling its own variation on human hair. Perlman now has 1,000 SKUs; they all come from a factory, but not the kind you would imagine.

China and India supply most of the hair to Sunny’s, says Smith. The nations are the two major exporters of human hair, and most of it comes off the heads of people in lower-income brackets.

China is the No. 1 exporter of human hair, followed by India. That’s mostly due to population, availability and cultural traditions. In India, women grow their hair by the ponytail and donate it to a temple as part of Hindu religious practice. The temple then sets up a hair auction, says Smith. Factories bid on the hair, and the temple reaps 100 percent profit to put back into service, upkeep and community outreach.

“The donors are aware that people buy their hair,” Smith explains. “It’s lucrative for the temples because they’re getting it for free. Whether or not we buy it, it exists because people are growing it for religious purposes.”

The hair then goes to processing facilities, which sort the ponytails by length. They can either put it into something called a weft—basically a flexible framework for the hair that keeps it in place. Wefts are sewn into extensions called “weaves”—where a person sews the extension into his or her hair. Alternately, the ponytail can be “pre-tipped” with keratin for “strand-by-strand” extensions. Pre-tipped extensions use a wax method of application.

Next, the hair can be processed for textures and colors. The most desirable hair is called raw hair, also known as “virgin” or “remy.” It’s the most natural, and has undergone the least processing. Factories can then sell directly to the retailer or to a middleman.

Hair is sold in bulk or by the strand. A retailer such as Sunny’s can buy bags of hair in bulk or individual ponytails.

After this long journey, retailers sell hair to customers who take it to their stylist to get it customized, cut and fitted, for prices that can run into the thousands. Others can buy hair extensions from their salon to save time and hassle, but many choose to buy hair from retailers instead of the salon, because it’s usually cheaper. Retailers typically also have a broader selection than stylists do, explains Smith.

The Cost of Beauty 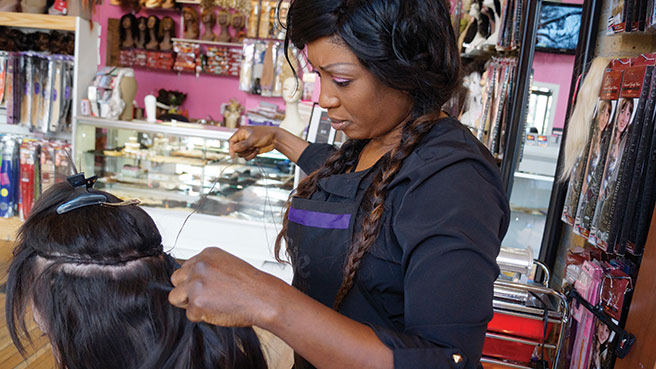 Lillian Anderson sewing in a weave at her salon, Extensions Plus, in Minneapolis.
Photo by Urmila Ramakrishnan

Celebrities are willing to pay upward of five figures when they buy hair, which translates to higher prices for the everyday consumer. “People are definitely spending more,” Smith says. “The more open celebrities have been to extensions, the more the average woman has been open to them. You get celebrity-quality extensions available to people now, and they pay celebrity-quality prices.”

An average full 16-inch weave—a type of extension that is sewn into a tight braid of existing hair, and which has been popular among black clientele—can cost anywhere from $50 to $4,000, depending on the type of hair, length and quality. They differ from other extensions because they are sewn in, rather than utilizing a heat and wax application system or employing temporary extensions called clip-ins.

Typically, well-made extensions are sold by the ponytail, meaning that it comes from one person’s head. The more hair needed, the more ponytails sold. However, cheaper extensions and weaves can come from several people. Customers pay for how long the hair lasts and the quality of processing. Cheaper hair tends to shed and fall apart.

“If you get hair that’s $10.99, a lot of that hair is from the brush,” Smith says. “They put it in a bag, they take it down to a factory, they have no idea what the person has done with their hair and they coat it with a lot of chemicals, like conditioning agents. You’re basically using that hair until those conditioning agents wash off. So it’s the longevity that you’re paying for.”

Retail cost for a full head of 18-inch extensions can cost anywhere from $150 to $1,000. That higher-priced extension wholesales for $370 a kilo (a kilo produces five to 10 extensions) according to A. Kishore Kumar of the Human Hair Supermarket in Chennai, India.

Declining supply is becoming a factor. Fewer women are growing hair to sell to the masses, Perlman says, which he attributes to a rapidly industrializing China, with other sources of income now available. Hair donors can also sell hair in cities, where they pay more, which also drives up prices, he says. “The supply, right now, is not meeting the demand.”

As the market adapts to fill the need, human hair extensions are fast becoming as common as lipstick in the beauty world. But they remain the only beauty product growing off the productive capacity of someone else’s head.

Urmila Ramakrishnan is a Twin Cities writer. This is her first TCB byline.