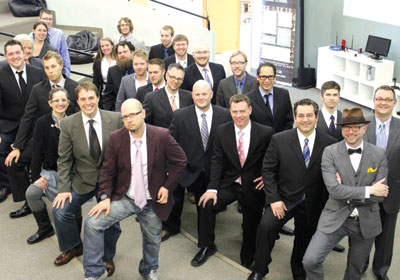 IT firm the Nerdery didn’t let the tragic loss of its leader hinder its growth.
October 01, 2012

It was the kind of tragedy that would have slowed many companies. On October 25, 2010, Luke Bucklin, president and co-founder of the Nerdery, a fast-growing Bloomington-based web development company, died, along with three of his sons, when the plane he was piloting crashed in bad weather in Wyoming.

“I can’t say we didn’t skip a beat, because I’m sure we skipped a lot of beats back then,” recalls Mike Derheim, another co-founder, who succeeded Bucklin as head of the Nerdery. “But I feel so proud of the way the entire company rallied around. He was my best friend as well as my business partner, so it’s still very hard for me.”

The Nerdery doesn’t appear to have skipped many beats. It has been on the Inc. 5000 list of America’s fastest-growing private companies for the past five years (including this year), and was recently named to the “Flyover 50,” which recognizes the 50 fastest-growing companies based in the middle of the country. The Nerdery’s specialty is managing the nuts and bolts of website and mobile app development for companies and marketing agencies. That work includes programming, technical strategy and management, and user interface design. The Nerdery’s projects have included websites for Target, General Mills, Norton Antivirus, EA Sports, and LexisNexis; the agencies it has worked with have included locals such as Zeus Jones and out-of-state powerhouses Leo Burnett, BBDO, and San Francisco–based Heat.

The Nerdery was founded in 2003 as Sierra Bravo; its original business was updating and modernizing legacy computer systems for (mostly) smaller businesses. Over time, co-founders Bucklin, Derheim, and Mike Schmidt (now the Nerdery’s CIO) found that ad agencies and other businesses needed access to highly skilled IT technologists on web projects, and didn’t need or want to hire their own in-house developers. Sierra Bravo started providing those services under the Nerdery name. In 2010, the Nerdery had grown so huge that Sierra Bravo changed its name to its now-dominant division.

After the Wyoming tragedy, Derheim took the title of CEO rather than president, which had been Bucklin’s title. The company’s other employees all became co-presidents—partly in memory of their leader, partly in recognition that the techies that make up most of the company’s staff draw from each other’s distinctive expertise in a realm that is constantly morphing.

Sometimes that expertise isn’t solely technological. Recently, while working on a website proposal for the United States Bowling Congress (USBC), Nerdery solutions engineer Eve Poeschl found colleague Troy Cleland at her desk, “uninstalling” a virus on her computer. Cleland “noticed I had the USBC website up,” Poeschl recalls. “He proudly stated that he is a USBC member. After talking to USBC about what they wanted to do, we decided to do something unconventional and interview Troy as a stakeholder. Using the information Troy gave us, along with our in-depth knowledge of market trends and technology trends, we were able to put together a more informed proposal, and suggested solutions that USBC had not even thought about.”

The Nerdery is “a fairly sizeable company, but they’re all really passionate about what they do, which is evident when you work with them,” says Tom Flint, director of digital at Minneapolis ad agency Gabriel deGrood Bendt. “We engaged with them recently for a fairly major website redesign. I saw that co-president mindset in the level at which everyone on their team participated in what they were doing. There is no one there who is just along for the ride.”

In August 2010, the company opened a second office in Chicago, which now employs more than 30. Since a good nerd can be hard to find, the Nerdery employs three full-time “nerd hunters” devoted exclusively to employee recruitment.

“We are thinking about expansion all the time,” Derheim says. “Most of our steps into other geographies will be based on the developer talent we can find, because our mission is always to be the best place on earth for nerds to work.”