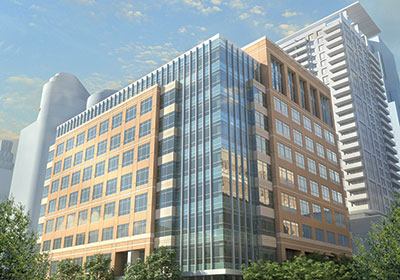 Twin Cities business boosters like to tout the exceptional features of the local economy. A lower-than-average unemployment rate. A strong base of local Fortune 500 companies. One of the lowest apartment vacancy rates in the United States. Consistently strong rankings on lifestyle ratings and surveys.

But when it comes to the health of the local office market, the Minneapolis-St. Paul area does not have much to brag about compared to other cities. New York-based Reis Inc., a real estate research firm, reported an office vacancy rate of 17.3 percent in the Twin Cities at the end of the third quarter of 2013, slightly higher than the national average office vacancy rate of 16.9 percent.

The Twin Cities market mirrors many other cities nationally that are seeing continued high office vacancy amid sluggish job growth and a trend for companies to use office space more efficiently.

“It’s still a very tepid pace of recovery,” says Ryan Severino, senior economist and associate director of research with Reis. “This is kind of what we’re stuck with for a little while.”

According to Reis, many of the best performing markets around the country are cities with a strong presence of tech or energy companies. Neither is a robust sector in the Twin Cities.

“Minneapolis is king of an interesting situation. It’s not a tech or an energy market, but at the same time, it’s definitely not the worst market that you could imagine. There are certainly more distressed markets out there than Minneapolis,” says Severino. “Minneapolis has been recovering for the last couple of years. …There’s improvement there. It’s somewhere close to the middle.”

But local business boosters can be forgiven if they’re slow to adopt “definitely not the worst” as a marketing slogan for the region.

In early 2013, local brokers were optimistic about a solid year of leasing gains across the Twin Cities. But as it turned out, the year brought fairly muted deal activity. Many companies in the market for new leases are looking to trim rather than add space, or are seeking a way to get more employees into the same amount of space that they currently occupy.

For many companies, real estate is another cost that has to be watched closely in a bumpy economy.

A recent Colliers report on the local office market noted the trend of companies adjusting their space needs: “In an effort to encourage collaboration, cut costs and take advantage of technological advances that allow for more mobile computing, companies are reconfiguring their space plans to include more shared spaces and fewer private offices.”

A move toward densification

The report even coined a word—“densification”—to refer to “the contraction of square feet of office space per worker.”

Many real estate brokers say that previous benchmarks allocating 225 to 250 square feet per employee are being winnowed down to guidelines closer to 175 square feet per employee today. That means that companies can get the same number of employees into less space, which translates into paying less overall rent. Even companies that are not cutting jobs can still cut their real estate expenses.

Bloomington-based commercial real estate brokerage Cushman & Wakefield/NorthMarq closely tracks local market data. In its mid-year 2013 report, it reported about 350,000 square feet of positive absorption across the Twin Cities for the first half of 2013. (Absorption measures the change in occupied space between reporting periods; positive absorption signals that tenants are adding space while negative absorption is a sign that they’re cutting space.)

But nearly all of the gains in the local market during the first half of 2013 were in the first three months. Cushman & Wakefield/NorthMarq tallied a mere 3,776 square feet of positive absorption—the equivalent of a single small-office lease—for the second quarter of 2013. Revised forecasts call for 2013 to wind up as a slower year than 2012, when Cushman & Wakefield/NorthMarq reported 967,000 square feet of positive absorption in the office market across the Twin Cities.

“Businesses are dealing with a lot of uncertainty, and I think they delayed many decisions over the last several years. It hasn’t been a robust recovery,” says Mike Ohmes, executive vice president with Cushman & Wakefield/NorthMarq. “When people have a lot of question marks, they tend to get pretty conservative.”

The company is in the process of overhauling its own space. Cube sizes are being cut, but more collaborative work spaces are being added to create a new work environment. “We have very few private offices in our new space that we’re designing,” says Ohmes. “We’re long overdue. … It was stuff that we were doing all the time for our clients. We just had to do it for ourselves.”

Jim Vos, principal with the Minneapolis office of Cresa, a tenant representation firm, says that he’s seeing clients be cautious as they weigh leasing needs. “I think people are continuing to think hard about how much space per person they really need,” Vos says.

But, he notes, there’s a limit to how much companies can cut space without creating an overly cramped environment for employees.

“I think it gets hard to get below 175 [square feet] if people are in the office regularly,” Vos says.

Severino of Reis, however, says that he thinks the idea that companies are packing in employees like sardines has been overplayed. He says his company’s data does not show much evidence of the trend nationally.

“There is some of that going on. I don’t think it’s as pronounced as the media makes it out to be,” Severino says. “I think companies are kind of experimenting with it a little bit.”

Vos says that he also sees companies looking for spaces that reflect the company’s values.

“I think maybe what’s different is we’re seeing people look for space that’s a little bit more of a culture statement,” Vos says. “People want daylight and more open space, less visual clutter. … I think that has a big impact on how space feels. Most of the good architects are busy right now.”

With high vacancy among existing buildings, there’s been little development of new office buildings in the Twin Cities in recent years. But there are a handful of exceptions on the horizon, such as build-to-suit projects tailored to specific corporate users.

Minnetonka-based Opus Development Co. will start construction this summer on a new nine-story, 222,000-square-foot office building in downtown Minneapolis at 401 Nicollet Mall. The office building will be fully leased by Minneapolis-based Xcel Energy Inc., a Fortune 500 utility, which has its headquarters across the street. The new building is scheduled to be complete in August 2016.

Dave Menke, executive vice president of Opus, says that the company has done a half-dozen other build-to-suit office projects around the United States in recent years.

“For the most part, those were consolidations,” Menke says, noting that in many cases companies combined multiple office locations into a single building.

For Xcel in downtown Minneapolis, Menke says that the new building offers the company a chance to create its own campus at the north end of the Nicollet Mall. The new office building will be connected by skyway to Xcel’s current headquarters.

In its new space, Menke says, Xcel was looking for many of the same elements that other tenants say they want in new spaces.

“They want larger, column-free spacing. They want large windows to maximize natural light. They want energy-efficient space to keep their operational costs low,” Menke says. But looking to the future, Menke does not see a long list of corporate tenants who could anchor new buildings and drive more office development. A lack of robust job growth is holding back a flood of new projects, he notes.

“The fact is there’s still this movement to get by with less footage across all sectors, from attorneys to the financial sector,” Menke says. “You’ve got the continued desire to get by with less space. That does not bode well for any robust recovery in the office sector.”

While new buildings draw attention, tenants typically leave behind empty space to move to newer buildings, which leaves more office space on the market to be backfilled.

Bill Katter, executive vice president with United Properties, says that employers are looking for spaces that will draw employees.

“Increasingly, the ‘Gen Y’ office workers between their early 20s to mid-30s are most interested in working in urban office environments with proximity to housing and other amenities,” Katter says. “Ford [Center] and Loose-Wiles kind of fit that bill exactly. In general, the office market has been slow the last nine months, but we have continued to see a steady stream of interest.”

United Properties also acquired the vacant Neiman Marcus store at 505 Nicollet Mall this past May for $5.5 million. The developer has struck a deal to sell the property to Houston-based CenterPoint Energy Inc., which will ultimately use the reconfigured retail space as office space to house its Minnesota offices.

“They were one of probably five or six parties that were interested in that location,” Katter says of the former store.

In another deal, United Properties will build a new 240,000-square-foot office building in the North Loop for the nonprofit National Marrow Donor Program/Be the Match, which is currently based in northeast Minneapolis.

“That’s a theme that’s playing out across the country,” Katter says. “It’s all about location, character, environment and amenities.”