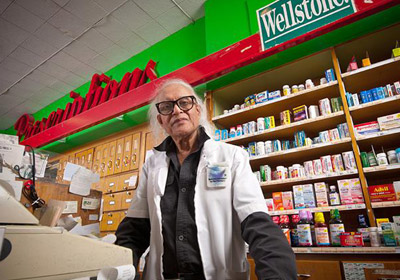 Due to health and age, the 75-year-old Sengupta is looking for someone else to carry on the work at his iconic Prospect Park pharmacy, Schneider Drug. No one will be able to carry it on in the same way.
January 24, 2015

Around Thanksgiving, Tom Sengupta, Prospect Park’s legendary pharmacist/humanitarian/community builder/all-around good guy was diagnosed with colon cancer, which led to another discovery: He also has cancer of the esophagus.

This would seem to be about as bad a double-barrel blast of news as a person could receive. But, in Sengupta’s view, it isn’t. “I’m losing my independence,” he said. “They’re telling me when to sleep, what to eat and just about everything else.”

He’s got another concern, as well. On Friday, the Minneapolis City Council is holding a ceremony, declaring it Tom Sengupta Day in the city. This was the idea of council member Lisa Goodman. There will be some short speeches and a lot of kind words said about the 75-year-old. “I asked Lisa, ‘If I survive, are you going to take it all back?’” said Sengupta.

Bigger than life
Sengupta has been running his independent pharmacy, Schneider Drug, since purchasing the business from Earl Schneider in 1972. That means he’s kept going while most of the independent drug stores in the metro area have been shuttered, unable to compete against the big chains.

He kept the “Schneider Drug’’ sign over the store because it had become a University Avenue institution and he “thought there should be continuity.” He has survived the competition with the Walgreens and Wal-Marts and Targets by working 80-hour weeks and by offering a kind word and corny jokes to anyone who walks through the door. “A doctor said to me once, ‘We have the same client,’” Sengupta said. “I said, ‘No we don’t. We have the same patient.’ I’ve never been a businessman. But I know people.’’

Now, because of his health and age, he’s seeking to sell his business to someone who will carry on the tradition of caring for people and caring for the community. But no one will be able to carry on in the same way. “He’s not a big person,” is how Goodman puts it. “But he’s bigger than life. He always brings people together.”

He brings people together even though he wears his liberal politics on his sleeve, or — more accurately —on the wall. Signs featuring the thoughts of the late Sen. Paul Wellstone, among others, are displayed throughout the store. “Politics is about the improvement of people’s lives,” says the one that hangs above the pharmacy counter.

Sengupta was one of the former Senator's first supporters. In 1990, he dug into his own pocket and found others who to make small donations to Wellstone, a man who nobody figured had a chance to win his party’s endorsement, let alone a seat in the U.S. Senate.

Wellstone never forgot it. The Senator made frequent appearances at Sengupta’s semi-regular meetings, held around an imitation wood-burning stove in the store. A gaggle of people, sitting on folding chairs, would talk over local and world problems. Most of these who come to the hot-stove sessions are old and liberal, though there are a sprinkling of libertarians and political conservatives in the crowd. The only people not particularly welcome are the cynics. Cynicism, in Sengupta’s eyes, has never solved anything.

‘I have faith in common people’
It was the politics of hope that brought Sengupta to Minnesota in the first place. Around the age of 20, he immigrated from India to New Orleans to study. It was while in Louisiana that he first heard of Hubert Humphrey, a former pharmacist who was then running to be the Democratic Party’s nominee for president. “I was fascinated by him and his politics,” said Sengupta. (Sengupta never did meet his hero, though he has befriended Humphrey’s old friends and family.)

He came to Minnesota to complete his education. He ran the store, and with his wife of 50 years, Janice, raised two daughters. And through all the everyday stuff, through all the cultural changes, Sengupta thought big thoughts about how the world really should be a better place.

And though he has great admiration for many political leaders — Humphrey, of course, and Lyndon Johnson and Wellstone and now Elizabeth Warren — he became more and more convinced that it isn’t necessarily the most powerful who change the world. “When society is under duress, don’t let the people in power set the agenda,” he said. “That’s the time to question the people in power. It’s our voices that matter.”

The seed of this idea was planted in 1961. Sengupta was poking around a bookstore near the University of Minnesota campus when he came across a book about Wisconsin’s notorious Sen. Joe McCarthy, who built his reputation by ruining the reputations of others by claiming they were communists.

“I was reading this book and there was a story about this guy who McCarthy blackballed,” said Sengupta. “The guy lost his job, then his he lost his family and finally, he killed himself. But he never backed down from his values. Think about that. The whole country turned against him and he lost everything. We need to honor people who stand up for their values.”

Sengupta started thinking of other individuals who stood up to power: Gandhi’s salt march of 1930, which was a step toward the independence of India; the German students who created the White Rose movement against Hitler’s regime; the Stonewall riots of 1969, which began to open the door to equal rights for the GLBT community; locally, the civil rights work of such people as Josie Johnson and Nellie Stone Johnson.

These are the sorts of actions, big and small, that we should study and honor, Sengupta believes. In recent years he’s been pushing for a place — ideally a university setting — where there would be monument to the uncommon deeds of the common person. More importantly, there would be seminars, maybe a whole curricula devoted to actions that are too often forgotten.

He has a small model at the back of his store on how such a monument might look. There are stone walls, angled toward a statue of a representative “common” person. On the walls, names of the honored would be engraved. “I have faith in common people,” said Sengupta. “I believe the first step to changing society is talking about new ideas.”

There are hard weeks ahead for the man who has been a warm and welcoming institution for decades. Late this month, he is to undergo surgery in the attempt to deal with the cancer in his esophagus. Then, assuming good outcomes, comes treatment for the colon cancer. “I will survive this,” he said. “I still have so much work to do on my project.”