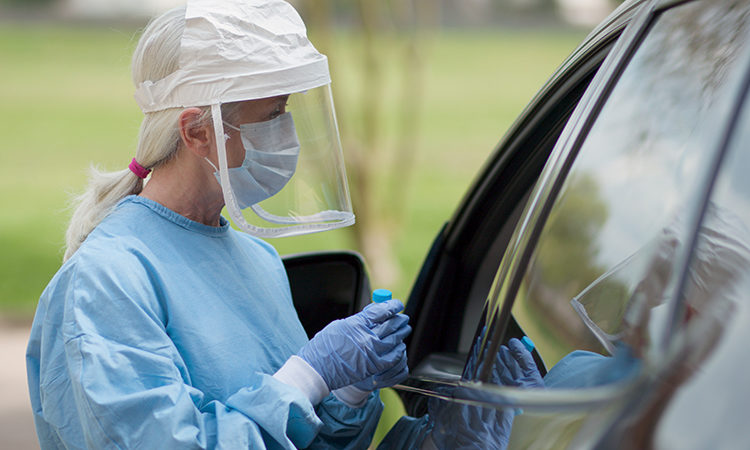 The Minnesota Department of Labor and Industry says 96 percent of Covid-19 infected workers covered under a new law had their workers’ compensation claim accepted. Those who didn’t qualify saw their claim denied 72 percent of the time.
By Peter Callaghan
August 26, 2021

If you think you were infected with Covid-19 in a Minnesota workplace, you were better off being a nurse than a meatpacker.

Because of an emergency law adopted at the beginning of the pandemic, certain workers had an easier path to winning claims under Minnesota’s workers’ compensation law than others. That law said that certain workers who became infected were presumed to have been exposed to the virus on the job. Everyone else had to prove that the exposure was at work versus in the community.

A recent report from the state Department of Labor and Industry shows how important that law turned out to be for those who qualified: health care workers, first responders, police officers and corrections staff. In her report to the Legislature’s Frontline Worker Pay Working Group, DLI Commissioner and working group member Roslyn Robertson said that 96 percent of infected workers covered by the presumption law had their claims accepted. Workers who had the burden of proving they were exposed to Covid-19 at their place of employment, however, saw their claims denied 72 percent of the time.

And one group of workers who faced high infection rates in the early months of the pandemic in 2020 — beef, pork and poultry processors — have not had a single claim for compensation due to Covid-19 accepted. That’s despite the fact that Covid-19 infections closed several large meat processing plants and led to fears of supply shortages across the U.S. The federal government quickly ordered the plants to reopen.

After inquiries from the state about the lack of claims among meat processing workers, some were made by processors on behalf of employees. But all were denied by the companies’ insurers or claims administrators. “Some employers have taken the position that at the time when the largest number of meatpacking workers were diagnosed and reported to the Department of Health, there was broad community spread of Covid,” Robertson said. “They took the position that an individual worker could have come in contact with Covid outside the workplace.”

The state has a dispute resolution protocol but DLI must be contacted by the worker or their representative in order to initiate the process.

DLI reports that about 2,500 Covid-19 claims that were initially denied by insurers have resulted in payment of benefits. Most of these denials were withdrawn following receipt of additional information about Covid-19 status and investigation by the insurers, said Brian Zaidman, a senior research analyst for the department.

In contrast, 15,481 health care workers — 74 percent of the total number of Minnesota’s Covid-related claims — filed for compensation. Of those, 85 percent were paid. Workers who think they were infected in the workplace can still file claims with their employer.

The presumption question was one of the only controversies when lawmakers gathered after shutting down due to the pandemic in March of 2020. A series of laws to respond to the pandemic and to pay for public health interventions passed easily. But there was resistance to the presumption law from some businesses, as well as local governments, because the costs would be borne by employers.

At the time, estimates of the cost of claims by the 183,000 workers covered by the presumption ranged from $320 million to $596 million. That estimate included lost time as well as medical costs and temporary disability. But only $15.6 million has been paid out, with very little going to uncovered health care costs. Robertson said health care reimbursements average about $500, which she noted was roughly equal to the cost of Covid testing.

DLI points out the early cost estimates were based on best guesses by state Department of Health, using models that estimated Minnesota could see 30,000 to 70,000 Covid-19 related deaths. So far, 7,767 deaths are attributed to Covid-19 in the state.

Workers’ compensation is a mandate under state law, with most employers either self-insuring by covering the claims against them or buying insurance. Even self-insured companies often use claims administrators to process claims, however, and the system is considered no-fault: Employees injured on the job can’t sue for those injuries and employers can’t allege negligence.

But decisions to accept or deny claims are made by an employer’s insurance company or claims administrator, and rules over the system are a perennial battleground between business and labor. A business-labor committee usually has to agree on changes before lawmakers are willing to wade in.

The issue of presumption was brought to the Legislature by firefighters, who saw their colleagues in the Seattle area fall ill. The law ultimately passed the House 130-4 and the Senate 67-0, and because it only covered workers infected after the law took effect, Walz signed the bill immediately.

The examination of the workers’ compensation data was part of the front-line worker task force, which is deciding how to spend $250 million in so-called “heroes checks” for workers who stayed in jobs where exposure to the virus was possible or even likely. But the amount of each check will go down depending on how many people are deemed eligible, a group that could include as many as a million workers.

Some members of the working group have suggested giving consideration for the checks to front-line workers who got workers’ compensation or have already received special pay hikes or bonuses from employers.

Last week, meat-processing employees represented by the United Food and Commercial Workers told the working group they should be included in the bonus check group. “We can’t do Zoom meetings to cut meat,” said Nancy Carabantes, an employee of the JBS plant in Worthington.

She said both she and her husband tested positive for Covid-19, as did their 9-year-old son. “Everyday my husband and I go to work and we’re wondering if we’re bringing this virus home to our kids.”

Renae Brackey, a production worker for Hormel in Austin, said workers there remain afraid of the virus. “We’ve been going to work and watching our co-workers get sick,” she said.

The working group, which has representatives from the Minnesota House, the Minnesota Senate and the Walz administration, is charged with presenting a plan by Labor Day. A special session of the Legislature will be needed to approve distribution of money, which will come from the state’s direct share of money from the federal American Rescue Plan.