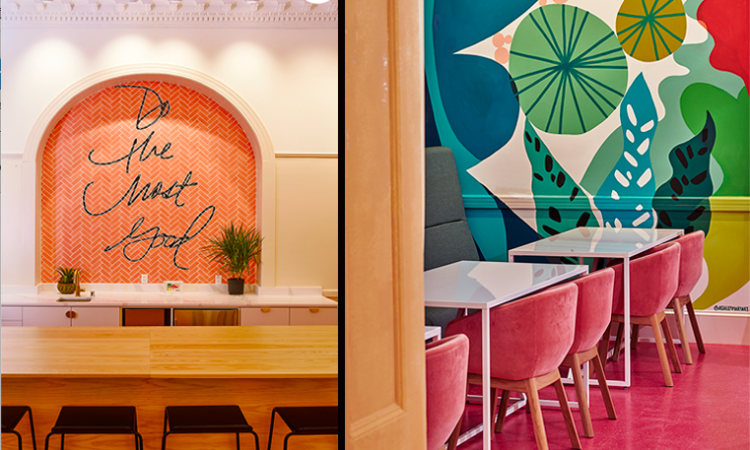 The Coven St. Paul. Photos by Tyson Crockett, courtesy of The Coven

The Coven Rises in St. Paul

The co-working community for women, non-binary and trans individuals is opening a second location that will be first in the Twin Cities to offer on-site childcare.
By Tess Allen
January 20, 2020

Nearly two years after breaking new ground with a co-working space aimed at women, non-binary, and trans people, The Coven is at it again: The Coven St. Paul, set to open January 28, will offer childcare—the first program of its kind in a Twin Cities co-working space.

“We know that one of the biggest barriers to entry for folks who are looking to advance their careers in the corporate world or looking to leap into entrepreneurship is a lack of childcare,” The Coven co-founder Alex West Steinman says. “We have many, many parents in our space who need that kind of support. For a few hours here and there, we can take your kids off your hands so that you can get some focused work done.”

The childcare service, available on a drop-in basis for children 6 weeks and older, is $10 an hour for members, with scholarship hours available to those who qualify as part of The Coven’s 5-for-1 Community Funded Membership model. (The model offers a free membership to a woman, non-binary, or trans individual from an underrepresented community for every five regular memberships purchased.) The childcare program will launch as a pilot on February 3.

The Coven St. Paul will also offer private offices, 24/7 access, and free parking. Other amenities, like classes and workshops, snacks, fresh coffee, and deals with local community partners, will mirror those of the Minneapolis location.

The Coven St. Paul’s 9,000-square-foot location, which includes an extensive build-out of five units on the upper and lower floors of the Blair Arcade building on Selby Avenue, is designed by women-owned firms Studio BV (featured in our January issue) and Kalcon. The space also showcases art from more than a dozen local artists from varying backgrounds.

New to both locations of The Coven in 2020 are several event series focused on topics like funding new businesses, growing in corporate organizations, education on civic engagement opportunities, and developing financial skills.

Memberships to The Coven can be used for access to both locations.

The Coven's four female owners have previously said they plan a national expansion as soon as this year.

The co-working industry is booming—read our in-depth report.