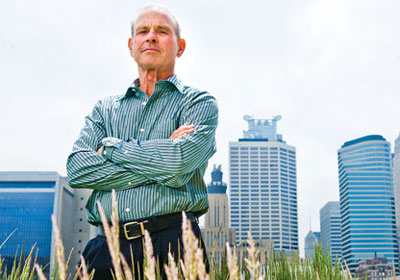 Bruce Hendry is at it again, spelunking for bargains in troubled assets.

It’s a vocation for Hendry, and one that’s been extremely rewarding. In the 1980s, he engineered four widely publicized triumphs that established him as an oracle in this arcane corner of corporate finance: huge returns for himself or his clients on the distressed securities of the Erie Lackawanna Railroad, Wickes Companies, and FirstRepublic Bank, and a proxy fight and subsequent reorganization of Kaiser Steel with Hendry at the helm.

The past two decades have taken him in other directions. Hendry’s 1991 purchase of the Schmidt Brewery in St. Paul brought it back into production, though it ultimately failed. So did an ethanol plant that opened at the site later. Hendry still owns the property, renting it out now for use as warehouse space.

He also went into angel investing and bought silver—the physical kind that you store away. He won’t say how much he bought, but does say that he acquired all of it for less than $5 an ounce and got $13 to $18 an ounce for what he’s sold. Some of his silver was stored in the World Trade Center towers in New York City when terrorists destroyed them in 2001. Crews sifting through the rubble recovered it all.

Hendry’s own life seemed on the verge of doom the next year. Days after he turned 60, he was diagnosed with a stage-four mantle cell lymphoma, a cancer that had metastasized to his colon and bone marrow. He and his wife, Sharon, moved to Houston, Texas, for his treatment. Five months and six rounds of chemotherapy later, doctors at the M. D. Anderson Cancer Center pronounced Hendry cancer free.

He remains so today. But rumors about his condition were flying around the Twin Cities at the time. “After I got back,” Hendry says, “I heard that I was dead.”

His return now to distressed-asset investing is a sign of the times. Seasoned investors like Hendry—experienced at bottom feeding—expect banks, government agencies, and others to soon be unloading buckets of troubled properties at dead- minnow prices.

Hendry recently moved up from limited partner to become a general partner in the Opportunity Partners Fund, a limited partnership set up in Minneapolis two years ago to buy distressed properties.

At first, the fund was called Condominium Opportunity Partners, reflecting its original focus. Fund managers broadened their scope to include all kinds of properties across the country. Hendry points out that troubles—and hence opportunities—have become widespread in more niches of real estate.

Once every quarter-century or so, he explains, “dart opportunities” arise in distressed investing—occasions where success can come as easily as tossing a dart at a fat target. Real estate now “is bigger than anything I’ve ever seen in my lifetime,” Hendry declares.

Still, he says, even the most experienced investors in distressed properties will need savvy hands on deck and ample capital. Hendry and the other general partners bring decades of experience in finance and real estate to the Opportunity Partners Fund. They are:

• Ted Glasrud, Jr., an owner of locally based Condo Holdings. The Glasrud family has long been active in Twin Cities commercial development. Glasrud’s work with Opportunity Partners includes identifying properties that the fund might buy.

Opportunity Partners initially raised $15 million. Early this year, it sought another $25 million, but in a difficult fundraising environment, closed the round at about $5 million. Even so, by leveraging what it raised, it could have as much as $60 million to invest, and by investing with equity partners, could participate in a portfolio of properties as large as $100 million.

Funds like Opportunity Partners employ an elementary strategy. As pressure mounts on lenders to sell distressed properties at bargain prices—forced by a glut of foreclosures, a depressed real estate market, and scarce credit—the fund picks up these properties cheaply, then holds them and takes in rent and lease income until the market rebounds and they can be sold at far higher prices.

Through June, Opportunity Partners had made only one investment: $2.3 million for 18 residential condominiums at a site in Brooklyn Park. More deals appear likely soon.

Drill Down to the Dusty Details

While he’s dealing in investments that are distressed, Hendry is anything but. He views excursions into troubled assets as exhilarating pursuits, and no wonder. He once bought Erie Lackawanna Railroad bonds at $90 each and sold them eight years later for $1,735 apiece.

Daryle Uphoff, managing partner at the Lindquist & Vennum law firm in Minneapolis, worked with Hendry in the Kaiser Steel Chapter 11 reorganization and has known him for 28 years. He credits Hendry with a high tolerance for risk and strong analytical abilities that uncover the underlying value of assets.

Other colleagues liken Hendry to a forensic accountant. He drills through financial statements, footnotes, and often-esoteric disclosures to find the telling details about an investment—usually publicly traded debt securities. Hendry, sometimes with an equally dogged investment partner, fits those details into the broader picture of an industry and the overall economy, then negotiates enhanced terms for himself or other creditors.

For the Erie Lackawanna bonds, Hendry teamed up in 1980 with Barney Donohue, a rail buff and retired IRS special agent. Donohue studied the bankrupt Erie Lackawanna Railway’s tracks and facilities along its entire route from New York City to Chicago. Hendry used that analysis to value the railroad’s rolling stock and other assets, bought the distressed bonds at a discount, and when the Erie emerged from bankruptcy in 1982 (with Hendry named CEO), reaped stratospheric returns for himself and his Twin Cities investment clients.

He only doubled his money in the mid-1980s with the bonds of the Northern Pacific Railroad, once part of the James J. Hill railroading empire. At the James J. Hill library in downtown St. Paul, Hendry plowed through dusty indenture agreements between the railroad and its bondholders and found that the company had agreed, back in the late 19th century, that all earnings from its huge land holdings would go back into the railroad over the life of two bond issues that didn’t mature until 1997 and 2047. Hendry bought the bonds at bargain-basement prices, then sold them at a profit to Northern Pacific’s successor company, the Burlington Northern Railroad.

But Hendry started with real estate. After earning an undergraduate degree in business at the University of Minnesota, he worked briefly as a microfilm-machine salesman for Kodak, then became a stockbroker in 1968, eventually settling, in the mid-1970s, at the original Craig-Hallum investment firm in Minneapolis (the name belongs to another local firm today). There, he met Howard “Sam” Leppla, who introduced him to distressed debt investing.

The two men bought real estate investment trusts (REITs) at rock-bottom prices when the REITs began imploding at the end of the 1970s. Leppla flew to Florida to examine the REITs’ troubled properties. Hendry pored over their financial statements. Wall Street had been so badly burned by the REIT bubble that it had even pulled its securities analysts off the REIT sector. “I had the field all to myself,” Hendry says. “We made an enormous amount of money.”

The two men bought real estate investment trusts (REITs) at rock-bottom prices when the REITs began imploding at the end of the 1970s. Leppla flew to Florida to examine the REITs’ troubled properties. Hendry pored over their financial statements. Wall Street had been so badly burned by the REIT bubble that it had even pulled its securities analysts off the REIT sector. “I had the field all to myself,” Hendry says. “We made an enormous amount of money.”

“I look for opportunities where people in an industry are broke,” says Hendry After Wickes, the California-based furniture retailer, acquired Twin Cities–based retailer Gamble-Skogmo and then tumbled into Chapter 11 bankruptcy protection in 1982, Hendry and Lindquist & Vennum attorney Mel Orenstein won $137 million for investors who held Wickes’ debt securities. Wickes had offered only $30 million. But Hendry, as the head of a creditors’ subcommittee that Orenstein got approved by the bankruptcy judge, filed and leaked to the press a separate plan of reorganization than the company’s own, and put pressure on Wickes to sweeten the deal for its noteholders.

Hendry’s highest-profile experience began routinely enough in 1985, when he invested $15,000 of his wife’s money in the preferred stock of Kaiser Steel Corporation. Two years earlier, Kaiser Steel had shut down its one-time jewel, the gigantic steel mill near Los Angeles that Henry J. Kaiser built to fire up the nation’s vaunted “Arsenal of Democracy” during World War II.

Kaiser Steel missed two straight preferred stock dividends. Hendry launched a determined proxy contest that led to the sacking of top management and Hendry’s installation as CEO and chairman. After that victory at a meeting in Delaware, he and Uphoff flew to Kaiser’s headquarters in Colorado. Before they got through the front lobby, Kaiser’s CFO confronted them with the news that the company couldn’t meet its payroll obligations for the week.

“We thought we had won a dead dog,” Hendry says. In fact, Hendry’s Kaiser investment never brought him a big financial return. But Ron Bitonti, chairman of the voluntary employee benefit association set up for the steelworkers at Kaiser, says Hendry restored $90 million in benefits to thousands of workers at the mill.

The psychic rewards of leading the company through reorganization were considerable. “In my mind, this was my greatest accomplishment,” Hendry says.

He calls his greatest financial success his decision in 1988 to team up with Texas accountant Bill Fagan to buy the deeply discounted bonds of FirstRepublic Bank, a bank holding company in Dallas. Members of Hendry’s investor group, the largest single holder of the company’s senior debt, got more than $62 million for their bonds, or about nine times what they had invested three years earlier.

“I Think I’ll Do This One More Time”

Hendry grew up the son of a machinist in Brooklyn Center. When he was 14, he bought a quarter-acre of lakeshore land in Isanti County for $440, built a house there as an investment, and paid for the supplies by sanding Sheetrock. He and his wife, Sharon, have moved now from a longtime home in Bloomington to the Carlyle, a high-rise condo development near the downtown Minneapolis riverfront.

Formally retired, Hendry bikes, golfs, and plays broomball. (His knees say no more running marathons.) He often stretches the two-and-a-half-hour drive to his family cabin near Cable, Wisconsin, to five hours as he experiments with different routes. “With Bruce, everything is an adventure,” Sharon Hendry says.

With Opportunity Partners, he’s back at his favorite kind of adventure. But if his return to distressed-asset investing is a sign of the times, what about the prospect that many other bottom fishers will do the same?

Hendry isn’t concerned; the competition is for huge projects or smaller ones, while Opportunity Partners is shopping for medium-sized properties. Hendry believes the biggest risk for the fund is not being able to buy properties soon enough, at prices that are low enough. If that happens, the fund could face too much overhead and not enough income to meet its projections.

Still, he’s convinced that opportunities in distressed properties are especially good now, because the leverage used to finance deals soared to ever-greater heights in the past 15 years or so. “The things that should have been distressed got refinanced,” he says. “It became like a volcano.”

The volcano erupted. The dust is still settling, and Bruce Hendry wants to help sweep it up. “I think I’ll do this one more time,” he says.