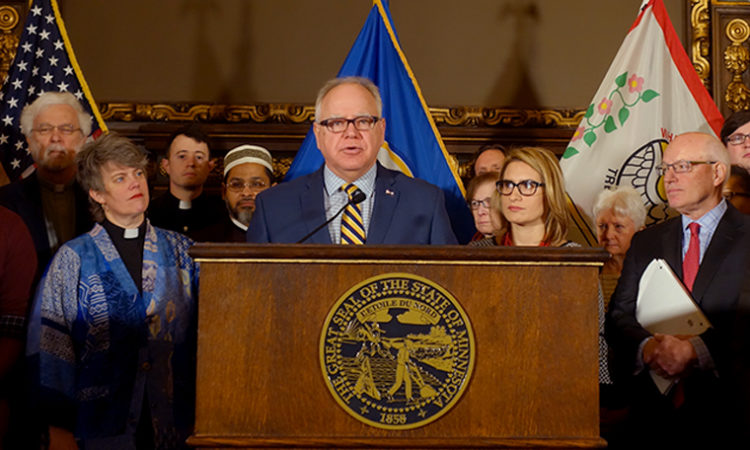 Gov. Tim Walzâs support for an angel tax credit is welcome news for many in the stateâs tech sector. ( Photo by Peter Callaghan/MinnPost)

From 2010 to 2017, Minnesota had such a program, which rewards what can be a high-risk bet on entrepreneurs and nascent startups. Reinstating it has been a popular idea among lawmakers from both parties so far in the 2019 legislative session.
By Walker Orenstein
February 07, 2019

Minnesota Gov. Tim Walz has grand plans for the state’s technology sector while in office.

At a “Session Priorities” dinner hosted by the Minnesota Chamber of Commerce in January, the DFLer told the crowd that when people think about cities with thriving tech scenes, he hopes they won’t envision “just Palo Alto, Seattle or Austin. It needs to be Minneapolis.”

To help the state meet that lofty goal, Walz specifically mentioned one item on his agenda that could nudge Minnesota in the direction of Silicon Valley: reviving an “angel” tax credit for those who invest in early-stage businesses.

From 2010 to 2017, Minnesota had such a program, which rewards what can be a high-risk bet on entrepreneurs and nascent startups. Supporters of the angel credit say it can keep young companies with good ideas and little cash afloat long enough to succeed. Detractors of programs around the country argue it amounts to a tax break for the wealthy.

State lawmakers periodically replenished the angel credit fund, but it ran out of money last year after former Gov. Mark Dayton vetoed a large omnibus bill that contained cash for the program. “It’s something that I’m interested in bringing back in,” Walz said at the Chamber of Commerce dinner, describing his plan for boosting tech. So far, lawmakers in both parties have been receptive.

Many fans in the tech sector

Walz’s support for an angel tax credit is welcome news for many in the state’s tech sector. Steve Grove, Walz’s new commissioner of the Department of Employment and Economic Development (DEED) and the former director of Google’s News Lab, mentioned it as a top priority for sparking new tech companies in a recent Star Tribune op-ed commentary, calling an angel credit one way to “aggressively” market Minnesota “as a great place to start a tech company.”

Rob Weber, co-founder of Great North Labs, a company that invests in upper Midwest early-stage businesses, also mentioned the credit as a way to encourage innovation at a “Technology State of the State” event last week.

In a follow-up interview, Weber outlined his pitch for bringing back the tax credit. For starters, he said Minnesotans tend to take fewer chances when investing compared to tech hubs like California and Washington state.

An angel tax credit can make it easier for investors to take a leap of faith on the off chance they bet on, say, the next 3M, Weber said. “Government can play a role getting the culture to be a little more risk tolerant,” Weber said. He pointed to Finland, where the government has offered aggressive help to entrepreneurs, as an extreme example of prodding the private sector into building a robust technology industry.

And while Minnesota’s economy is not exactly in desperate need of a pick-me-up — the state boasts nearly 20 Fortune 500 companies and uber-low 2.8 percent unemployment — Weber said Minnesota can’t afford to be stagnant in a rapidly changing world in which automation threatens jobs across many sectors. “To me the future is sort of now and we either become a leader in the technology economy or technology workforce or we don’t,” he said.

Weber himself used the angel tax credit before it went away, investing in the fantasy sports company LeagueSafe founded by Paul Charchian, who is also known for hosting a radio show on KFAN. Under the program, investors got a credit worth 25 percent of their investments — up to $125,000 per person.

DEED records show LeagueSafe got a $100,000 investment in 2013 as part of the program. The resulting tax credit amounted to $25,000. “I’d say the angel tax credit in that case definitely caused me to want to invest in that company because it wasn’t only returns oriented,” Weber said.

A high cost for few jobs?

There is no question the angel tax credit program has been expensive. A report given to the Legislature by DEED shows businesses that have received investment from the program have created 1,533 direct jobs between 2010 and 2017. Total private investment during that period was more than $420 million, and the public cost was upwards of $100 million.

In 2017, DEED attributed 320 direct jobs to Minnesota’s angel tax credit, but also measured for the the number of indirect hires resulting from the program, which it defined as “contract workers, consultants, agency staffers and others” indirectly hired by businesses. DEED says there were 1,012 indirect hires that year. Altogether in 2017, businesses in the program received $44.5 million in private investment, and taxpayers bankrolled about $10.7 million.

The angel credit program has also overwhelmingly benefited the Twin Cities. While urban areas are a natural tech hub, roughly nine out of 10 businesses funded through the program since 2010 have been in the seven-county metro area. The proportion was even greater before 2014, when the Legislature mandated at least half of businesses getting money must be either from Greater Minnesota or run by women or racial minorities.

In the absence of an angel tax credit program, venture capital hasn’t stopped flowing, either. The Star Tribune reported in January that Minnesota businesses raised a record $786 million in 2018. The nation also broke its own records in 2018.

Weber argued it’s still early to be counting job totals from the angel investor program. After all, roughly a year after Google’s founders got their first big investment ($100,000) and left their first office (a Menlo Park, California, garage), the company had just 40 employees. At the tech event in Minneapolis, Weber also said investors must give more focus to areas outside the Twin Cities in order to both win over lawmakers and boost economic development.

A popular idea in St. Paul

Despite the price tag from the angel tax credit, reinstating the program has been a popular idea among lawmakers from both parties so far in the 2019 legislative session. At least three bills to extend the program have been introduced in the Senate. The main differences in the legislation are whether to keep the program temporary or to establish it permanently.

Sen. Ann Rest, DFL-New Hope, is the primary author of Senate File 303, which would continue the program for only two years with $10 million each year. She told MinnPost it’s proper to consider whether to renew the program each time lawmakers write a budget in order to assess with a sharper eye whether there’s enough money to keep it going. Rest is the top DFLer on the Senate’s Taxes Committee.

The practice of reserving tax credits to support companies owned by women, people of color and people outside of the Twin Cities in a state known for having large economic disparities by race and ZIP code is a selling point, Rest said. “It’s a way of encouraging investors, particularly in startup companies, to pay attention to those businesses in Greater Minnesota and also minority- and women-owned businesses,” she said.

GOP Rep. Paul Anderson of Plymouth introduced Senate File 788, which would pump $20 million into the program every year and keep it going forever. Rep. Paul Marquart, DFL-Dilworth, told MinnPost he has signed on to a bill sponsored by DFL Rep. Carlie Kotyza-Witthuhn that has yet to be released, but would accomplish the same goals.

Marquart, who chairs the House Taxes Committee, said he’d prefer to temporarily reinstate the program and wouldn’t promise the angel tax credit would get money in the two-year budget lawmakers are writing in 2019. But he said the concept has “bipartisan support and, sounds like, support from the governor.”

“I think that bodes well for its future, let’s put it that way,” Marquart said.