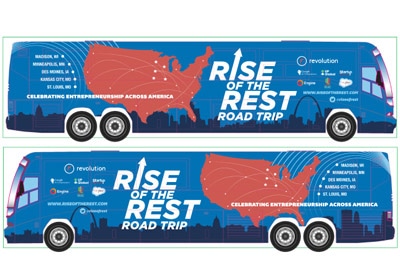 The Rise of the Rest road tour will reward startup efforts here and in four other Midwestern cities.
October 10, 2014

Ten local startups have been selected to compete for a $100,000 investment from AOL’s co-founder as part of a five-city entrepreneurship road tour.

On Oct. 7, AOL’s Steve Case will select one Minneapolis-area winner for an investment and invite the company to vie for additional funding at the 2015 SXSW Startup Village in Austin, Texas. Minneapolis is the second of five stops on the tour—called the “Rise of the Rest.” With stops in Madison, Des Moines, Kansas City and St. Louis, the tour will cast a spotlight on entrepreneurship between the coasts.

“The Fortune 500 companies of tomorrow are the startups of today,” Case said in a statement. “Many of them are being born in traditional tech hotbeds like Silicon Valley, but many are also growing in the rest of America.”

Minneapolis’ finalists include the following:

75F enters the competition with some momentum: it won the 10th annual Minnesota Cup earlier this month, earning a $105,000 sweepstakes prize.

The Minneapolis bus tour will feature a “startup crawl” with visits to CoCo Startup Fair, Field Nation, Midtown Global Market and Sport Ngin. Steve Clemons, an editor-at-large with The Atlantic, will moderate a discussion at the Varsity Theatre before the 4 p.m. pitch competition. Those interested in attending can RSVP here. Case, meanwhile, is posting updates on Twitter using his handle, @stevecase, and the hashtag #RiseOfTheRest.