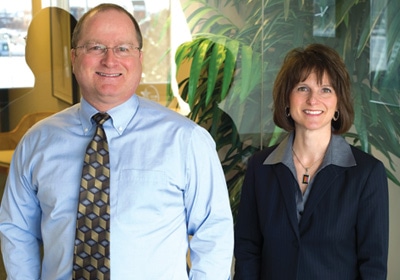 The 600-plus people in the company’s talent pool include former C-suite executives, vice presidents, directors, and physicians. Experienced Resources places them with hospitals, clinics, and other medical organizations on short-term projects and interim management assignments. “We look for people who bring both breadth and depth to the table,” CEO and President Mary Christensen says.

Christensen founded Experienced Resources with her brother, Damian Martin, now the firm’s CFO, in 2005. Martin, a former sales and marketing executive, was a labor market casualty when the company he worked for was sold and moved out of state. He came up with the idea for Experienced Resources while looking for work, and enlisted the help of his sister, who has an extensive background in health care human resources.

Experienced Resources is apparently tapping a need: Its annual revenues have climbed from $320,000 in 2007 to just over $1 million in 2010. “We are on track to double that this year,” Martin says. In April 2010, the firm added a third staffer—Mary Ellen Wells, who has held executive positions at Allina Health System and the University of Minnesota Hospital and Clinic.

Why has Experienced Resources worked so far? According to Wells, pressure on health care reimbursements from government and insurance companies has forced health care organizations to expect more from their top-level people, who are already working at full capacity but can’t afford to hire or don’t need to add a full-time employee.

One regular client is Minnesota Eye Consultants, a Minneapolis-based clinic with 25 doctors and 11 offices that calls on Experienced Resources for staffing on special projects. “When we put a new scheduling coordinator position in place, we needed someone to oversee the process and do some coaching,” says Candace Simerson, the physician group’s president and COO. Minnesota Eye also used Experienced Resources employees to oversee implementation of its new electronic medical records system.

As of late February, Experienced Resources had filled 69 assignments for 39 clients. The average placement lasts four months for special projects and six to nine months for interim leadership positions.